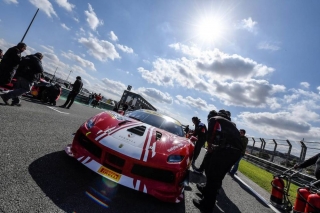 Maranello, 11 June 2019 – Excitement is mounting for the fourth round of the Ferrari Challenge Europe at the La Sarthe circuit on Saturday 15 June, just hours before the legendary 24 Hours of Le Mans. It is a special event, different from any other in the Prancing Horse one-make series, which will see all the 488 Challenge on track for a single 35-minute race that promises to be extraordinarily hard-fought and exciting. Sixty-one competitors are registered for the event, including some drivers who usually participate in the other two international series of the Prancing Horse, the North America and Asia-Pacific. From the North American Championship, held last weekend in Montreal in conjunction with the Formula 1 Grand Prix, we will see among others Thomas Tippl and Lisa Clark. The former is the Coppa Shell reigning champion, while the latter is the Ladies Cup leader and is aspiring rival of Agata Smolka.

Trofeo Pirelli. As there is still all to play for in the standings, the extra points awarded by the French race offers drivers a chance to turn the season around. Niccolò Schirò, currently leading with 73 points, after a difficult weekend in Spielberg only has a three-point advantage over Louis Prette and nine over Sam Smeeth. Thomas Neubauer, absent from Austria, and especially Bjorn Grossmann, aim to make up respective gaps of 23 and 25 points from the leader. The nine entrants also include Adam Carroll, the winner in Spielberg, and the 28-year-old Belgian John Wartique, who has driven in the GP3 Series and is making his debut in the one-make series.

Trofeo Pirelli AM. In this class, 17 cars will compete for the final victory even if it is difficult to imagine any shake-up in the overall rankings, dominated by Jack Brown on 91 points, courtesy of two consecutive victories and consistent performances. The Briton is the only driver to have finished on the podium in every race. Behind him, on 77 points, Emanuele Maria Tabacchi should do better than his duck in Austria, which hit his hopes for the title. The Italian driver started the season with two wins in Bahrain, followed by two second places in Valencia. Behind these two come four drivers all on 31 points: Jan Danis, Frederik Espersen, Martin Nelson and Christian Overgaard. From the US, Chris Carel and Eric Marston will try to stand out in a very competitive grid.

Coppa Shell. With 18 drivers entered, the Coppa Shell is the most popular class on the grid. The Lebanese Tani Hanna tops the standings with 89 points, after two wins and two podiums, followed 14 points behind by Ernst Kirchmayr, who won Race-2 in Valencia and Spielberg, in what was his home race. Canadian Eric Cheung, one of the fastest on the track, with his 62 points, is banking on this race to put himself back in mix for the title, as are Christian Kinch and Ken Abe, respectively on 59 and 57 points. This class sees four drivers from the Challenge North America, the highest number. Besides the already mentioned Thomas Tippl, there will be Dale Katechis, Geoffrey Palermo and Brent Holden, while “Baby Kei” will join the group from the Asia Pacific series.

Coppa Shell AM. The races and the championship in this class where three drivers are separated by just four points have been marked by balance and uncertainty. The Belgian Laurent De Meeus leads the standings, with four second places and points from every race.  After skipping the first outing, Henrik Jansen has powered up the rankings with three wins and is only two points behind De Meeus. The Polish Agata Smolka is in third position on 74 points, having enjoyed an excellent first half of the season with two victories. Of the 17 competitors in this class, three come from the North American Challenge, Lisa Clark, Mark Fuller and Al Hegyi.

History. This will be the fourth time in its 27 years that the Ferrari Challenge will run on the track made famous by the French marathon. The first was in 2011 when about 50 of the 430 and 458 Challenges took to the track, a figure repeated in 2013. In 2016, the Challenge appeared at Le Mans for the 84th edition of the French classic, with over 40 cars starting the race on one of the world’s most famous tracks. That year Marcello Puglisi won in the Trofeo Pirelli, Sam Smeeth in the Trofeo Pirelli AM and Vladimir Hladik in the Coppa Shell.

Programme. The programme for the fourth round of the Ferrari Challenge Europe is different from usual, concentrating the track activities into two days. Two free practice sessions are due on Thursday, at 10 am, and 11:25 am, both 45 minutes long. The 60-minute race for pole position starts at 3 pm. On Friday no track activities take place, as usual at Le Mans, but for the first time, the drivers of the Ferrari Challenge will join their 24 Hours colleagues in the parade through the streets of the city centre. The 35-minute race sets off on Saturday at 10:15 am, broadcast live and free on live.ferrari.com.