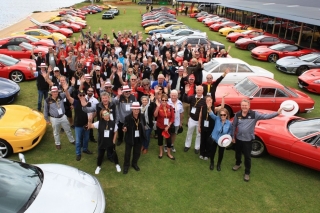 More than 60 Ferraris descended on the stunning West Australian city of Perth, as the Ferrari Car Club of Australia celebrated the beginning of its 2016 National Rally.

Ferrari owners and their cars from all over Australia made the journey cross-country to Perth for this special occasion.

Several cars were driven across the 200,000 square kilometres of the desert landscape of the Nullarbor Plain – the world’s largest single exposure of limestone bedrock – to be a part of the six-day celebrations, with many more being especially freighted from the other side of Australia for the occasion. This is no small feat in a country as big as a continent.

Once in Perth, guests celebrated with a welcome dinner, and a spectacular Concours D’Elegance showcase on the banks of the Swan River the following day. Members presented their suitably pristine, pampered and
prepared cars for commendation under the eagle eye of the esteemed judges.

The rest of the week was  filled with rally drives into the stunning hills surrounding Perth, lunch at Caversham House, winery visits to sample some of Australia’s best produce, and several track sessions on the acclaimed Barbagallo Raceway.

Ferrari products are designed to be driven, enjoyed, and appreciated. Events such as the Ferrari Club Australia National Rally, in a location as beautiful and diverse as West Australia, encourage clients to do just that: giving owners the chance to enjoy driving in the beauty of the natural landscape and testing the limits of their cars on track.  However, perhaps the most incredible and memorable part of events such as this is sharing the experience in the company of fellow Ferraristi.

The final day of the rally saw guests celebrating together by enjoying the presentation dinner, at which 60 awards were presented at Crown Astral Ballroom in Perth.