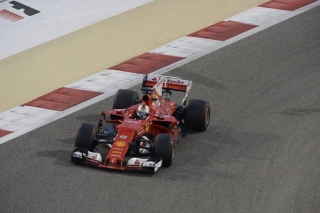 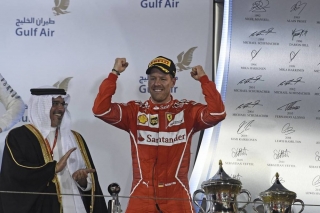 Maurizio Arrivabene: “Today’s victory was an important one, achieved thanks to the great efforts of all the guys at the track and back in Maranello. For the whole weekend, the team demonstrated courage, determination and a little bit of madness. This is all part of our DNA, characteristics which 70 years ago saw the birth of Ferrari. Courage and determination were needed to tackle a weekend like this, in which we expected to encounter a few difficulties in qualifying, which is why, based on good long run data on Friday, we prepared as well as possible for the race. In order to do this you also need to use some madness… Sebastian drove a really great race, demonstrating once again all his class. Kimi was caught up in traffic at the start and then he certainly wasn’t helped by the arrival of the Safety Car. The SF70H proved itself to be strong also in these conditions, at a track which requires above all power and good traction. The tyres worked very well, which allowed us to fully exploit our very good strategy. And now it’s time to concentrate on the next round of the World Championship, the Russian Grand Prix in Sochi.”

Mattia Binotto: “It wasn’t an easy weekend, because, as qualifying showed, Mercedes still has the upper hand on Saturdays and definitely more so here than in the previous two races. That means we must go through a lot of data and perhaps this will help us become stronger in the future. We are very happy about the race result: we definitely showed that today we had more speed than the Mercedes, especially on the Qualifying tyres. This can be seen by the fact that we have less tyre wear than our main competitors.”

Sebastian Vettel: “A great result thanks to all the team! At the start, it was important for me to get second place, and I managed. Also, we got everything right with the strategy. We decided to pit early and this tactics proved to be working. Towards, the end, I tried to manage the gap I had over Lewis. I expected him to charge through, of course I was concerned, with all the traffic ahead of me. But it the end it was all OK. The car was like a dream to drive today. I felt right from the beginning that we had the speed to win today. I had a good feeling yesterday already, and it was just confirmed today. The lap back to pits was so sweet, with all the fireworks around, and I really savored it. Tonight we enjoy the moment, but tomorrow we’ll be back at work. I haven’t changed my mind: to become world champion, you must first beat the Mercedes We’ll take it race after race.”

Kimi Raikkonen: “In a way, a lot of good things happened this weekend, but the end result is still disappointing. The car was working pretty nicely and to be honest I expected that. Today I had a bad start and because of that, the first two corners were really bad; obviously after that I was catching up, I got past Massa reasonably quickly. Then I did my pit stop, but I was unlucky with the Safety Car. The overall feeling was good, I was fast but obviously the time lost at the start did not help: we put ourselves in a difficult position. I feel that we are absolutely doing the right things, and in the big picture we are pretty much where we want to be, but we still need to fine-tune a few things; it’s all about putting the lap together. We need to start more at the front and then our races will be a lot easier. I am happy for Seb and for all the team.” 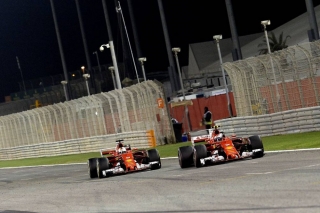 Sakhir, 16 April 2017 –Sebastian Vettel produced a gutsy drive this evening to win the Bahrain Grand Prix, having started from third on the grid. His victory was also down to the strategic calls from the Scuderia Ferrari pit wall. Kimi Raikkonen finished fourth, despite encountering a few difficulties. He fought back to finish just off the podium. After the first three rounds, Ferrari lead the Drivers’ Championship with Seb, on 61 points, and the Constructors in which it has 102 points. This is Seb’s fifth won in Prancing Horse colours. 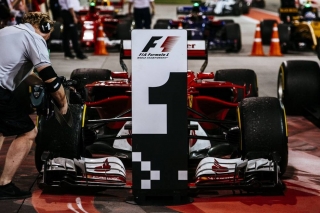 It is, of course, hugely satisfying to be back on the top step of the podium with Seb. More importantly, however, we are now completely confident that our victory in Melbourne wasn’t just a one-off and that we will be at the forefront of this World Championship until the last. We finally have a competitive car to count on and it is important to recognize the speed with which we implemented the developments demanded for each new race. All this is the fruit of superb work at the track and in Maranello, so my compliments not just to Seb for his achievements in Bahrain, but also to the whole team. Congratulations to Kimi too on a good race. That said, we are well aware we have a long road ahead and know that if we want to get to the most important finish-line of all, we cannot stint on our commitment and focus for a second.

Bahrain Grand Prix – “Tomorrow it should be closer” 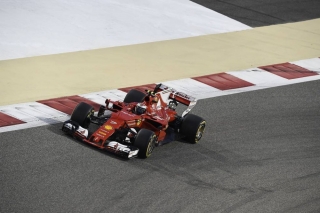 Seb hopeful as car looks better for the race

Overall, it has been a good day. Yesterday I couldn’t get the right feeling, I kept sliding too much. We made some minor tweaks on the set-up and the car felt better today, I was quite happy with the balance. But in qualifying, after seeing what the gap was at the end of my first run in Q3, I wasn’t so happy, so I tried it all and maybe pushed a bit too much. This is a circuit where you can easily overshoot it. Today, we were losing a bit everywhere around the lap, perhaps more than usual down the straights. But tomorrow it should be closer, and hopefully we’ll have a tight race. The car feels good for Sunday.

Bahrain Grand Prix – “Not what we wanted yet” 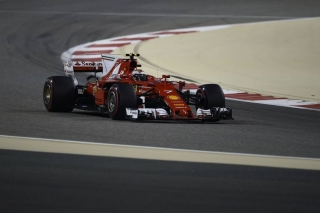 Kimi: car has a lot of potential, difficult to unlock in qualifying

The car was good overall, I thought there was a lot of potential, but for many little reasons we never really got the time out of it. The final result is far from what we wanted, but that’s how it ended up today. I have been struggling to find the right set up: all in all it has been better here than it’s been the last few races, but in qualifying, when we start to push, it is not what we wanted yet. Tomorrow is another day, the grid position is not ideal and the race is going to be quite tricky. So let’s try to make a good start , make the right decisions and take the best out of it.

Bahrain Grand Prix – Ferrari on the second and third rows 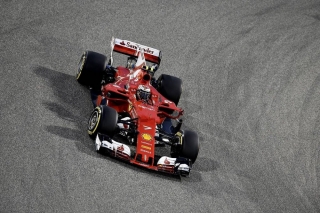 Sahkir, 15 April – In this evening’s qualifying held at the Sakhir circuit, Sebastian Vettel set the third fastest time of 1.29.247, to finish two places ahead of his team-mate Kimi Raikkonen, whose best lap was a 1.29.567.
Starting from pole tomorrow will be Valtteri Bottas, quickest for Mercedes with a 1.28.769. 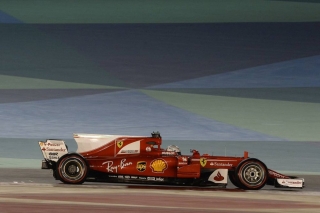 Sakhir, 15 April – Come the end of the final free practice session the Scuderia Ferrari drivers had set the third and fifth fastest times, courtesy of Sebastian Vettel (1:32.750) and Kimi Raikkonen (1:32.785) respectively.
In track conditions that were different to those that will prevail during this evening’s qualifying, Vettel used one set of new Mediums and one set of new Softs, while Raikkonen ran one set of new Supersofts and one of used Mediums.

Bahrain Grand Prix – “We still need to do better” 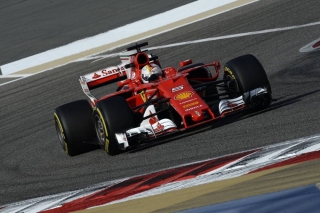 I can’t explain why the car stopped altogether, but we were able to recover, restart the engine in the garage and, fortunately, it happened at the end of the lap. Today it was not our best day for us and we still need to do better. The car feels good on a single lap though, and as for race simulation, we can further improve for tomorrow. Overall, I am not entirely happy with my long runs, but they were OK after all, and we also were caught a bit in traffic. Now let’s see what tomorrow brings.

Bahrain Grand Prix – “The guys did a good job” 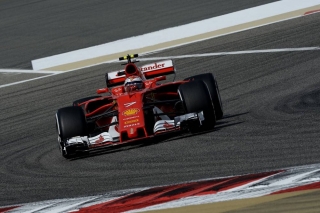 Kimi pleased with team fixing the car in time for P2

It’s far too early to say what we can do here and conditions were tricky today. We had an issue that stopped us in very early part of the first session; this issue had nothing to do with the engine, but rather with the turbo area. The guys did a good job in fixing the car in order to be ready for the second practice. The day could have been a bit better, but that’s how it goes. I like this circuit, but there’s nothing more special here than in other places. Obviously it’s very hot and this can be a little bit tricky for the tires. As usual on Friday there’s a lot of work to be done to be ready tomorrow. 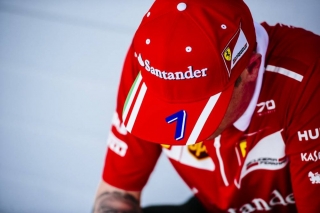 Sakhir, 13 April – “You and me are in agreement, we think the same way about a lot of things and that’s the most important thing.” Kimi Raikkonen and his race engineer Dave Greenwood get on really well and not just when it comes to work. You can see just this on the eve of a Grand Prix in which the heat, the variations in temperature from day to night, management of the tyres and the car, are all vital elements of this weekend. 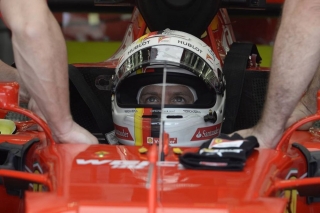 Sakhir, 13 April – Rhythm, braking, Bahrain peculiarities are just some of the words used by Seb Vette to describe the Sakhir track when talking to his race engineer, Riccardo Adami. We eavesdropped on their conversation round a small table as their chat revealed how when two people have been working together for a few years at Ferrari can develop an understanding that goes beyond just the technical details. To the extent, that in the end, it’s Ricky who surprises his driver… 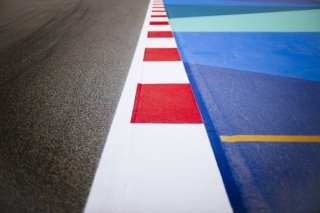 Temperatures round the 40 degree mark in Bahrain

Maranello, 12 April – In a few days, Formula 1 faces a complete change of scene. From the metropolis to the desert, from the cold and damp of Shanghai to a sweltering Sakhir and temperatures around 40 degrees. The only thing the Chinese and Bahrain Grands Prix have in common is that they both first appeared on the calendar in 2004. The circuits have very little in common: while Shanghai is all flowing corners, the Bahrain International Circuit juxtaposes straights with hairpins and heavy braking. Engine performance, traction out of the corners and stability under braking make up the technical challenge here. After a good result on Sunday, Scuderia Ferrari has travelled to the small archipelago of Bahrain – it measures just 765 square kilometres – in the Persian Gulf. The first back-to-back races of the year have involved a demanding schedule, with all the work of packing up quickly and sending the freight from China in a very short space of time. The race is run at night, although it’s still hot at that time and afterwards, some of the team will stay on for two days of testing on Tuesday and Wednesday.