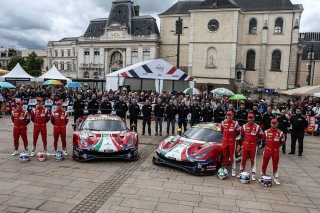 Maranello, 10 June 2019 – The week-long countdown to the 24 Hours of Le Mans, the most eagerly anticipated race for fans of closed-wheel racing, has officially begun with the pre-race administrative checks and scrutineering, known in French as ‘Le Pesage’.

Kessel cars. This lasts two days and involves all the crews starting the French marathon in their respective classes. Most of the 488 GTEs entered were checked today, while yesterday saw the turn of the two cars of Kessel Racing.

Female crew. The much-admired no. 83 is one of the biggest attractions for the media and fans, driven in the LMGTE Am class by the all-female crew of Manuela Gostner, Rahel Frey and Michelle Gatting. The Swiss team’s second car, the no. 60, will be in the hands of three Italians Claudio Schiavoni, Sergio Pianezzola and Andrea Piccini, who usually compete in the European Le Mans Series.

The scrutineering and administrative checks are a highly anticipated event for fans, offering them a close look at the cars and drivers before the action shifts to the 13,262-metre Circuit de la Sarthe. 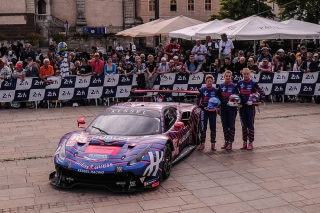 Maranello, 5 June 2019 – The countdown has begun to the highly anticipated 87th edition of the 24 Hours of Le Mans, the race that closes the 2018-19 Super Season of the FIA World Endurance Championship (WEC). In ten days, at the La Sarthe circuit, 62 cars will compete for the final victory in their respective classes and, among them, 11 sport the colours of the Prancing Horse.

LM GTE Pro. Three 488 GTE cars will start in the LM GTE Pro class, for professional drivers, lined up by AF Corse and Risi Competizione. In car no. 51, the reigning champions Alessandro Pier Guidi and James Calado welcome Daniel Serra, with whom they have previously competed in the 24 Hours, which counted as the second round of the season, and the 1000 Miles of Sebring. Then, in no. 71 Spanish driver Miguel Molina join the crew of Davide Rigon and Sam Bird. In addition to these two cars, usually involved in the FIA WEC, the no. 89 of Risi Competizione will be crewed by Pipo Derani, Oliver Jarvis and Jules Gounon.

LM GTE Pro-Am. In this class, eight 488 GTEs will compete on the 13,626 metres of the legendary French circuit. The Spirit of Race crew, with Giancarlo Fisichella, Thomas Flohr and Francesco Castellacci, hope to take advantage of the double points on offer in this race to bridge the 23-point gap separating them from the leaders of the Pro-Am class. The Clearwater Racing and MR Racing crews are unchanged from previous FIA WEC races: the Singapore team will field Luis Perez Companc, Matthew Griffin and Matteo Cressoni, while Motoaki Ishikawa, Olivier Beretta and Eddie Cheever III will represent the Japanese team. In its 24 Hours of Le Mans debut the Japanese team Car Guy Racing, winner of the Asian Le Mans Series, will deploy Frenchman Côme Ledogar alongside its regular drivers, Kei Cozzolino and Takeshi Kimura. All eyes will be on the 488 GTE of WeatherTech Racing, fastest in the pre-race test session, with the British Robert Smith joining the usual pairing of Cooper MacNeil and Toni Vilander. Jeffrey Segal, Rodrigo Baptista and Wei Lu are set to drive the JMW Motorsport car, distinguished by an original livery in tribute to this legendary race. The two Ferraris representing Kessel Racing also carry a new livery. Car no. 60 will deploy the crew taking part to the European Le Mans Series, Claudio Schiavoni, Sergio Pianezzola and Andrea Piccini, while the no. 83 sees an all-female crew of Manuela Gostner, Rahel Frey and Michelle Gatting, previously on the podium in the debut race of the ELMS series. The trio will write a new chapter in the history of women in the French classic. The first and only previous female crew to drive the 24 Hours at the wheel of a Ferrari did so in 1951 when Betty Haig and Yvonne Simon crossed the line in 15th place in a 166 MM Berlinetta.

Anniversary. Ferrari has decided to celebrate the 70th anniversary of its first victory at Le Mans in 1949 with a special logo on the roof of the two AF Corse 488 GTEs. That triumph also went down in history because race winner Luigi Chinetti, drove the 166 MM almost throughout, beating his rivals in cars with twice the cylinder capacity of Ferrari engines. He only briefly handed the wheel to the car’s owner and team-mate, Lord Selsdon (still Peter Mitchell-Thomson at the time), during a quiet phase of the race.

Race build-up. The week of the 24 Hours of Le Mans opens on Sunday 9 June with the technical scrutineering and the so-called ‘pesage’ ceremony at Place de la République. From Wednesday 12, starting at 4 pm, the cars go on track for free practice and the first qualifying session followed on Thursday by the second and third sessions. As usual, Friday is a rest day, but one that will include a big party and parade through the city centre. The 24 hours starts on Saturday 15 June at 3 pm.