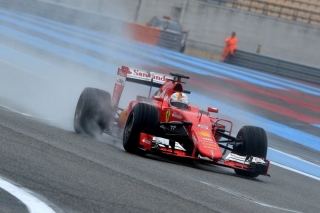 The Pirelli test ends with a “marathon”

Le Castellet, 26 January – With nine planned runs completed today, the Pirelli test drew to a close. It was an opportunity to fire up the engines after a two month break, courtesy of a special test to look at 2016 wet weather tyres. The distances planned for today’s running were much bigger than yesterday, with longer runs to evaluate the behaviour of the prototype tyres in variable track conditions.
In the closing stages, Sebastian Vettel set the fastest time, with a 1.06.750, running intermediate tyres. “It’s always useful to drive a car,” commented the German at the end of the day. “It was fun, even if, with a lot of different prototype tyres, you may get different results, without knowing which tyres we are testing, or if they are going to be used in the future or not. You can have a rough idea which tyres you test and how the tyres were last year, but it’s not clear what’s going to happen with the tyres after this, even if for sure there are some results, but it’s too early to say. It was dryer than yesterday, as they put less water on the track, but they provided us with very consistent conditions.” Sebastian completed a total of 134 laps today, equivalent to around 473 km. 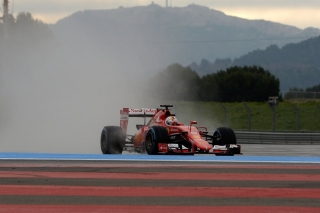 A TOTAL OF MORE THAN 650 LAPS AND 2300 KILOMETRES ARE COVERED BY FIVE DRIVERS FROM FERRARI, RED BULL AND MCLAREN
THE TEST RESULTS WILL NOW BE ANALYSED AT PIRELLI HQ IN MILAN OVER THE COMING DAYS

Le Castellet, January 26, 2016 – Pirelli’s two-day wet tyre test, held at the state-of-the-art Paul Ricard circuit in the south of France, concluded today at 4pm – with the specific aim of developing the latest generation of full wet tyres.
Ferrari, McLaren and Red Bull were present at the test, having accepted Pirelli’s invitation to all the teams to take part.
The Paul Ricard circuit’s sophisticated variable sprinkler system allowed Pirelli to test with different amounts of water on the track, in order to simulate a wide range of wet conditions. This meant that the drivers could try a number of full wet tyre prototypes, with different compounds and constructions compared to the existing 2015 Cinturato Blue.
As this was a ‘blind test’ the prototypes did not carry any colour markings on the sidewalls, and the teams and drivers did not know which specification of tyres they were testing. All the cars ran in unaltered 2015 specification.
The test and development programme was completed within two full days at Paul Ricard, with 659 laps of a short circuit configuration run by the five drivers involved, totalling 2326 kilometres.
Temperatures remained consistently low throughout both days of the test, peaking at 11 degrees centigrade. Although these were not ideally representative conditions, a wide range of data was collected that will subsequently be analysed at Pirelli’s headquarters in Milan.
McLaren’s Stoffel Vandoorne was the only driver to drive during both days, while Ferrari ran Kimi Raikkonen on Monday and Sebastian Vettel on Tuesday. Red Bull tested with Daniel Ricciardo on day one and Daniil Kvyat on day two.
These were the quickest times set over the course of the two days:
Vettel (Ferrari) 1.06″750 (134 laps)
Kvyat (Red Bull) 1.06″833 (113)
Vandoorne (McLaren) 1.07″758 (87 + 127)
Ricciardo (Red Bull) 1.08″713 (99)
Raikkonen (Ferrari) 1.09″637 (99)
The development programme will now continue back at base, when Pirelli will compare each team’s telemetry with its own data, in order to obtain a full picture of every prototype’s performance.
The next outing will be the first pre-season test of the year at Barcelona in Spain on February 22-25.

Paul Ricard Test – Vettel takes over at the wheel 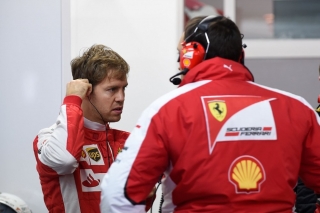 Le Castellet, 26 January –Testing continues at the Paul Ricard circuit, chosen by Pirelli for a session given over to wet tyre development for the coming season.
After Kimi Raikkonen provided the data yesterday, this morning it was Sebastian Vettel’s turn to slip into the cockpit of the SF15-T at the French circuit, using the short 3.530 km version, which was artificially watered. A change in the Red Bull camp too, where Daniil Kvyat took over from Daniel Ricciardo, while at McLaren, Stoffel Vandoorne is driving for a second day. There are more runs planned today- ten in total – and Vettel has already completed over 80 laps. 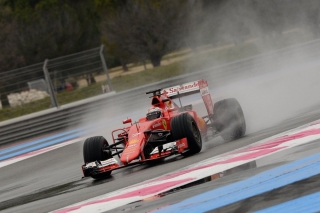 Kimi pleased at the end of his Pirelli wet tyre test

Le Castellet, 25 January – Scuderia Ferrari stopped work with over an hour to go to the track closure at the end of the first day of wet weather tyre testing, organised by Pirelli at the Paul Ricard circuit. Kimi Raikkonen completed 99 laps at the wheel of an SF15-T, working his way through all the sets made available by the Italian supplier. “It was like a normal day of testing,” commented the Finn at the end of the session. “I think it’s too early to say much about these prototype tyres, but it was a very useful session, because everyone was running under the same conditions. It’s been a while since we’ve driven and, even if it was just one day, there’s always something you can learn from it.” Tomorrow, the Scuderia will be back on track, with Sebastian Vettel at the wheel for the second and final day of the test. 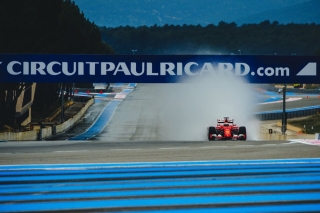 Pirelli test gets underway at Paul Ricard with three teams

Le Castellet, 25 January – It’s hardly a taste of the season to come, but this test, requested by Pirelli and running for two days, starting today at the Paul Ricard circuit, is nevertheless useful in assessing changes made to the full wet tyres. Kimi Raikkonen for Scuderia Ferrari, Daniel Ricciardo for Red Bull and Stoffel Vandoorne for McLaren are all running last year’s cars, as they try various specifications of extreme wets. The test got underway at 9.30 this morning at the French track, which has been artificially soaked. The type of tyre being used from run to run is not being disclosed as the session is being carried out as a “blind test.” By the middle of the day, Raikkonen had covered around 50 laps, with the session continuing until 5pm. 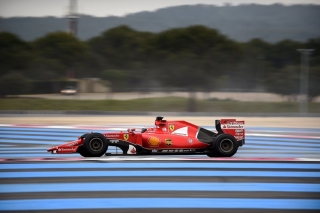 FERRARI, RED BULL AND McLAREN AT THE TWO-DAY WET TYRE TEST ORGANIZED BY PIRELLI AT PAUL RICARD CIRCUIT ON JANUARY 25-26

Milan, January 11, 2016 – Pirelli organizes a wet tyre test to be held at Paul Ricard circuit, on January 25 and 26.
The two-day test will be focussing just on wet tyres (no intermediates). Different wet prototypes will be tested.
Three teams will take part in the test: Ferrari, Red Bull and McLaren. More details on the drivers participating as well the test programme will be made available in the coming days.