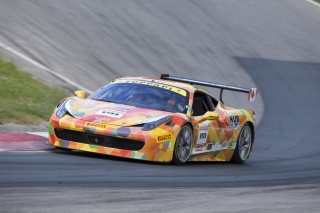 Bowmanville, 26 July – Today saw the final North American race of the weekend at Canadian Tire Motorsport Park, located just an hour north of Toronto, Canada. The racing spectacle brought by the 25 drivers delighted the Ferraristi. And the 2.5-mile circuit played host to not only the group of 458 Challenge EVO racecars, but also to the lapping of a LaFerrari and 599XX, one of the XX Programmes very special cars.

Trofeo Pirelli. Emmanuel Anassis (Ferrari Quebec) celebrated his second victory of the weekend at the top of the podium steps. Sitting on the pole again for the start Race 2, Anassis completed the race with the fastest lap time of 1:22:686. At every lap, Anassis was able to further bridge the gap ahead of his rivals. The true competition remained between Damon Ockey (Ferrari of Ontario) and John Farano (Ferrari of Ft. Lauderdale) who battled for set the order on the podium. Ockey from Ferrari of Ontario finished second and John Farano claimed a third place finish.

Trofeo Pirelli Am. The Trofeo Pirelli Am class saw the most exciting duels in today’s race.  First, yesterday’s victor, Marc Muzzo (Ferrari of Ontario) maintained a tight contention with James Weiland (Ferrari of San Francisco) throughout the 35-minute race. Both battled for a podium finish, but ultimately Muzzo would celebrate with champagne on his home track coming home third. A little further down the field, Gregory Romanelli (The Collection) and Steve Johnson (Ferrari of Ft. Lauderdale) had a tight contention at the midpoint of the race. The race went to Anthony Imperato (Ferrari of Long Island) first in his class,Mike Zoi (Ferrari of Ft. Lauderdale) in second and Muzzo, as said, in third place.

Coppa Shell. Rookie Chris Cagnazzi from Ferrari of Long Island had quite a successful weekend, stepping on the podium twice in Mosport. He improved his finish yesterday’s finish with a victory in his Coppa Shell class.  Joe Courtney (Miller Motor Cars) would find himself again on the podium in second place and Dan O’Neal (Ferrari of Ft. Lauderdale) in third. The weekend’s special achievement award was given to Barry Zekelman of Ferrari of Ontario who advanced five positions, the most of anyone in the field. The Ferrari Challenge North America returns for the sixth round of the 2015 championship at Circuit-Mont Tremblant on September 11-13. 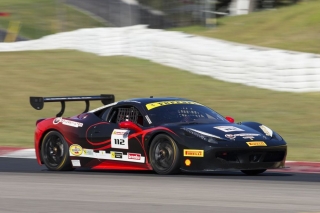 Bowmanville, 25 July – This weekend sees the fifth round of the North American Ferrari Challenge held at the Canadian Tire Motorsports Park, formally known as Mosport. The circuit, renowned for its high elevation changes, saw 27 drivers and 458 Challenge Evos race for victory in Race 1.

Trofeo Pirelli. Ferrari Quebec’s Emmanuel Anassis continues his successful streak, leading races and points in the 2015 season. As today’s polesitter, Anassis recorded the fastest lap with 1:22:453, and never had to look back. He held off John Farano (Ferrari of Ft. Lauderdale) for the entire race with a consistent 5-second gap. But the competition to highlight was between the Ockey brothers from Ferrari of Ontario. Damon and Ryan worked together to pursue their advance ahead of James Weiland (Ferrari of San Francisco). The final podium finishers for the Trofeo Pirelli class were Anassis in first place, Farano in second and Damon in third.

Trofeo Pirelli Am. It was a glorious race for Marc Muzzo (Ferrari of Ontario) as he brought home the victory in his class. Muzzo who qualified second in the Trofeo Pirelli Am category, maintained a constant battle with Anthony Imperato (Ferrari of Long Island). Both drivers raced an elegant ballet through the tight turns and apexes of the track. Ultimately, Muzzo overtook Imperato halfway through the race to finish first. Imperato would come in second and Weiland finishing third.

Coppa Shell. One could say Jean-Claude Saada (Boardwalk Ferrari) had one of his best races this year. Saada started first in his class, ahead of his friendly rival Joe Courtney of Miller Motor Cars, and throughout the 35-minute race sequesters himself amongst the Trofeo Pirelli AM drivers. Although he spun out toward the end of the race, he still managed to fight his way for a first place finish. Courtney finished second and rookie Chris Cagnazzi (Ferrari of Long Island) came in third. The Challenge returns to Mosport tomorrow for Race 2 at 2:20 PM EST. You can download Periscope and follow @FerrariUSA for a live stream of the race and daily activities. 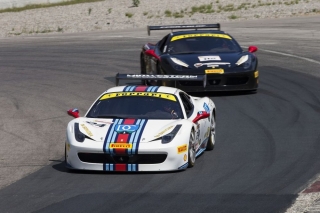 Bowmanville, 24 July – The North American Ferrari Challenge returns to Canada for the sixth round of the 2015 season. Racing this weekend at the Canadian Tire Motorsports Park in Bowmanville, Ontario, 27 drivers and 458 Challenge EVOs will race on the 2.5-mile circuit, formally known as Mosport.

Trofeo Pirelli. Frontrunner Emmanuel Anassis of Ferrari Quebec currently holds the lead in the championship with 138 points. But standing on the podium steps at nearly every race this season, has not been an easy feat for the Canadian. His biggest contender this season is the young Gregory Romanelli (The Collection) who has truly showcased a valiant effort in racing this season. Romanelli took the victory twice in Montreal last month and is looking for another triumph this weekend. And the 2014 champion winner, Ricardo Perez, continues to chase the checkered flag, currently holding 82 points.

Trofeo Pirelli Am. This is an inaugural year for the drivers of the Trofeo Pirelli AM. With competitive notion and talent drive, Mike Zoi of Ferrari of Ft. Lauderdale has competed at every race this season, and tasted the champagne on the podium. Leading his class with 111 points, Zoi has the championship victory on his mind. But he has much competition. Carlos Conde (Miller Motor Cars) and Anthony Imperato (Ferrari of Long Island) are also looking for a chance at a win. Both share 88 and 80 points respectively in their class, but also have drivers like Arthur Romanelli (The Collection) and Marc Muzzo (Ferrari of Ontario) looking for the lead.

Coppa Shell. Rookie Chris Cagnazzi (Ferrari of Long Island) has had a spectacular season racing in the North American Ferrari Challenge. Although a tight contention, Cagnazzi leads his class with 100 points, just one point ahead of Joe Courtney of Miller Motor Cars. Dan O’Neal (Ferrari of Ft. Lauderdale) follows in a close third with 91 points. Drivers will engage in two practice rounds today, with Race 1 at 2:05 PM EST (8:05 PM CET) on Saturday and Race 2 on Sunday is scheduled for 2:20 PM EST (8:20 PM CET). And don’t forget to follow @FerrariUSA on Periscope to see the latest happenings on track and in the Ferrari Challenge Paddock.