FIA WEC – Testing at the Nurburgring is complete 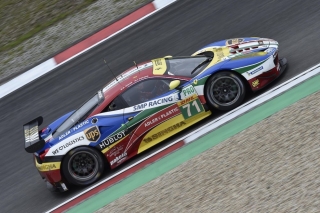 Nurburg, 28 July – Two days of tests have come to an end today for a number of the teams due to compete in the World Endurance Championship (WEC), the next stage of which will be held at this very track in Germany in just over a month. Four Ferrari 458 Italia GTE took part this season; AF Corse cars 51 (with “Gimmi” Bruni and Toni Vilander) and 71 (with Davide Rigon and James Calado) are competing in the GTE-Pro class, while AF Corse cars 83 (with Emmanuel Collard, François Perrodo and Rui Aguas) and 72, from the SMP Racing team, are in the GTE-Am class.

Hard work. Hard work. On the first day, car 51 was the fastest of the GTs, with a best lap time of 1’55″755 (of the 40 completed in total), while Rigon and Calado only achieved 1’57″069 out of a total of 51. Today was a productive day for both cars, despite the fact that the 51 had to pull out with an hour to go due to a gearbox failure. Of the 97 laps completed by Bruni and Vilander, the best time achieved by the pair was 1’54″972, the fourth fastest overall. It was a full day for the number 71, however, with as many as 114 laps, along with set-up and tyre testing and race simulations in extremely cold conditions (not more than 20 degrees). Rigon was third fastest of the day at 1’54″885, with Richard Lietz (Porsche) achieving the best time in 1’54″518.