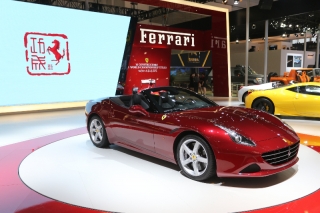 Beijing, 20 April 2014 – Ferrari comes to the 2014 Beijing International Motor Show with a unique combination of sportiness, exclusivity and versatility in the form of the elegantly-designed and highly innovative new California T.

The California T continues a long and glorious Prancing Horse tradition begun in the 1950s, and boasts singular levels of innovation, most notably in its turbocharged V8, a completely new power unit that, in a world first, successfully combines the performance, torque and sound of a conventional Ferrari engine, with the additional benefit of the fuel efficiency afforded by turbocharging.

The new mid-front 8-cylinder car is exceptionally practical, thanks to its retractable hard top (RHT) and the signature 2+ concept which provides additional versatility for using the cabin.

A seamless blend of sportiness and elegance, the California T is powered by a direct-injection 3,855cc V8 turbo engine that punches out a massive 560 cv at 7,500 rpm, yielding a specific power output of 145 cv/l, the highest in its category, as well as maximum torque of 755 Nm in 7th gear. Figures that allow the California T sprint from 0 to 100 km/h in just 3.6 seconds and deliver extraordinary acceleration – even in higher gears – and excellent fuel efficiency.

For the first time on an engine using this technology, turbo lag has been virtually eliminated by reducing inertia and adopting an F1-derived flat-plane crankshaft in addition to innovative twin-scroll turbines. Increasingly powerful pick-up is guaranteed by proprietary Variable Boost Management software which adjusts torque delivery to suit the gear selected, thereby also cutting fuel consumption.

As was the case in Formula 1, turbocharging was adopted out of a need to boost efficiency. Compared to the previous California, in fact, fuel consumption has been cut by 15 per cent* despite an increase of 70 cv in power output and a jump of 49 per cent in maximum torque in seventh gear. Emissions have been cut to 250 g/km on the combined cycle and by 20 per cent in the CO2/horsepower ratio (0.44 g/km/cv). As a direct consequence, the car’s range has been extended by 15 per cent.

Thanks to meticulous design and sophisticated production techniques adopted for essential components such as the flat-plane crankshaft and the three-piece cast exhaust manifold and turbo housing, the California T’s engine produces an enthrallingly powerful sound that becomes even more impressive as revs increase. This is a completely unprecedented achievement for a turbo engine.

Alongside the California T is the rest of Ferrari fleet echoing Different Ferraris for different Ferraristi philosophy. FF, the revolutionary 4-wheel-driven Grand Tourer, 458 Spider and 458 Speciale V8 twins and F12berlinetta, the most powerful V12 Ferrari (unlimited edition) is strikingly lined up on the booth with the prancing horse glory.

3 initiatives for the Year of Horse in China
2014 is the year of the Horse, following the unveiling of the dedicated year of prancing horse logo to share the legendary brand spirit in Chinese cultural way, Ferrari China has a series of initiatives to celebrate this special year, including a new tailor made centre and Ferrari Academy will be opened in Shanghai, and the continuous efforts for Million Tree project since 2012, to echo the prancing horse’s social responsibility in the Chinese local communities.

Ferrari Academy, the only professional training centre outside Maranello, is set to offer the most extensive training program for Ferrari staffs and mechanics in Greater China, emphasising Ferrari’s full commitment to providing best products and service to the customers in China

A brand new Tailor Made centre will be opened in Shanghai within this year, which will be the only Tailor Made Centre in Greater China. Each Ferrari is unique, Tailor Made is a highly innovative personalization programme allowing the client to tailor its own Ferrari according to his or her own preferences in terms of colours, materials and finishing. 3 unique collections include CLASSICA, SCUDERIA, INEDITA, representing tradition, performance and innovation respectively. Inside this new tailor made showroom, exclusive owners, enthusiasts and the media is able to have a better understating of the concept of exclusivity from Ferrari.

Furthermore, Ferrari will keep collaborating with Dr. Jane Goodall’s non-profit organization to continue the Million Tree project to neutralize its carbon footprint in China. Ferrari is the first luxury automobile brand in Greater China that offset carbon by planting trees. Each tree donated by Ferrari offsets 250kg of CO2 in its lifetime and will re-anchor sandy soil that has been lost to decades of erosion in Inner Mongolia. These measures have offset all the operating carbon emissions of the prancing horse brand, including car manufacturing, transporting from Italy to China, and the owners to drive for the year in China.

*The consumption reduction is calculated over a typical, real-life route.

Double debut for Ferrari at the Beijing Motor Show 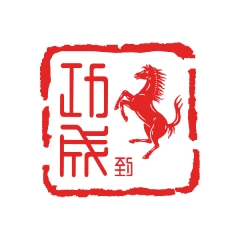 Maranello, 20 April – Double debut at the Beijing Motor Show for Ferrari that, in a crowded press conference, unveiled his celebrative logo for China’s Year of the Horse and his new Ferrari California T, the new car made in Maranello that immediately monopolised the experts’ attention.
The crowds flocking to the event also got their first glimpse of the new logo created by Ferrari to celebrate the Year of the Horse in the Chinese horoscope, which interpreting the Chinese belief of success with Ferrari’s successful heritage.

The logo takes the shape of a traditional Imperial seal featuring the Prancing Horse with an inscription on the side that translates as “May the Year of the Horse will bring success”. The logo combines time-honored Chinese traditions in text, calligraphy, and seal-cutting, and is cut in the form of a stamp and dipped in Ferrari red, nicely fitting the dignity of prancing horse.

The new logo is also to be seen on the stand at Beijing and flanks the most important debut of the event, that of the new Ferrari California T, making its first appearance in the Greater China area. Needless to remark, the car instantly attracted a huge crowd of visitors as well as capturing the attention of the media, making it the real star of the Chinese show. The car has 70 hp more than the previous California and a turbo V8 engine that guarantees a reduction of 15% in fuel consumption. In the Ferrari stand visitors are able to see the entire production and among these cars the most admired is the 458 Speciale, also a new model for Greater China market, that captured attention of media and visitors for his sportiness and performances. 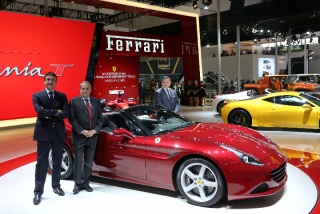 Beijing, April 23 – As one of the most important automobile prize in China, “2014 The Most Beautiful Automobile Award China” organized by Car and Driver Magazine was held in Beijing. Now in its 7th year in China, the award is honoured as “Oscar of Automobile”.

The award of “The Most Beautiful Sports Car” of the year went to the California T. The unique combination of sportiness, exclusivity and versatility in the form of the elegantly-designed and highly innovative new California T outdistanced from other sports and luxury competitors as well as got most of judging panel’s applause.