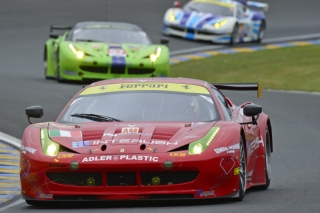 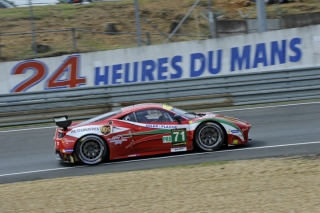 Maranello, 25 June –Disappointing but not surprising would sum up the Prancing Horse’s performance at the ninetieth running of the Le Mans 24 Hours. Things did not go well for the Maranello marque with a fifth and a sixth place for the AF Corse entered 458 GTs, crewed by Bruni-Fisichella-Malucelli and Kobayashi-Vilander-Beretta respectively in the Pro category. Hardly satisfactory and there was not much consolation to be had from the double podium finish for the team from Piacenza in the AM category, in which Casé-Perazzini-O’ Young finished second and and Cioci-Griffin-Gerber were third, with the last named driver being the oldest entered in the event at the age of 68 years and three months.However, this sort of result in the main class was totally predictable. The “balance of performance,” the current handicap system put in place by the FIA and the ACO for the GT and Sports races, leaves little room for imagination.Although the 2013 458 GT has undergone significant development compared to last year, it is still heavily penalised when compared to the best of the opposition, such as Porsche and Aston Martin. At Le Mans, in all track conditions, the Maranello cars were not competitive, lacking on every front: power, aerodynamic downforce and amount of fuel available for use.

Mistakes and unlucky incidents also played their part – one only has to find oneself in the second or third part of a group in a period when the race is neutralized, to lose a lap – but undoubtedly, the chances of fighting for the win were already gone before the start. The performance difference was very clear to see – both in outright terms and when looking at average lap times, so that only totally unpredictable events would have allowed the reigning champion car to fight for the double. Now it’s plausible to expect a change to the so called “BoP” prior to the second part of the World Endurance Championship, but as the saying goes, that’s a bit like shutting the stable door after the horse has bolted. The next race takes place in Sao Paolo, Brazil on 1st September.

A subdued one for Ferrari 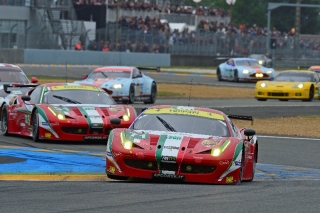 Le Mans, 23 June – The Le Mans 24 Hours did not smile on Ferrari this year. None of the three 458 GT cars entered in the Pro-Am category made it to the podium: the best result was a fifth place for the AF Corse car number 71, in the hands of Toni Vilander, Kamui Kobayashi and Olivier Beretta, who crossed the line three laps down on the number 92 Porsche of Lieb-Lietz-Dumas. The second car entered by the team from Piacenza, with the all-Italian crew of Gimmi Bruni, Giancarlo Fisichella and Matteo Malucelli finished sixth, one lap behind its sister car. The third Ferrari, entered by JMW Motorsport, finished tenth, driven by Bertolini-Al Faisal-Al Qubaisi, fifteen laps behind the winners. The fact that the ninetieth running of the most prestigious endurance race in the world would not look kindly at the Prancing Horse was clear right from the first hour of racing. The two AF Corse cars were not on the pace in the wet and the neutralization periods didn’t help either, so that they lost two laps after just two hours. From then on, given the hierarchy in the field, it was practically impossible for them to be in the hunt for a podium finish; those places being fought over all race long between Aston Martin and Porsche. In the end, the German cars took the top two places. It was a shame, given that for the rest of the race, the gaps remained more or less the same and no stone was left unturned in the efforts made to turn the situation around, even if right from the start, Ferrari could not be considered a favourite, while its race was then comprised in the very early stages.

While there were no miracles in the Pro category, things went much better among the Am cars, where two of the three AF Corse 458 GTs made it to the podium. Here too, Porsche was victorious thanks to the Vernay-Narrac-Bourret trio, who finished ahead of the crews of Casé-Perazzini-O’ Young e Cioci-Gerber-Griffin. The two Ferraris fought long and hard with the Porsche, but in the end they had to give best to a competitor who was stronger on the day. Ninth in the 8 Star Motorsport car was the trio of Potolicchio-Aguas-Bright and eleventh, even though it did not see the flag, was the third AF Corse machine, driven by Mallegol-Bachelier-Blank. It had to retire, as did the Krohn Racing 458 GT crewed by Krohn-Mediani-Jonsson. 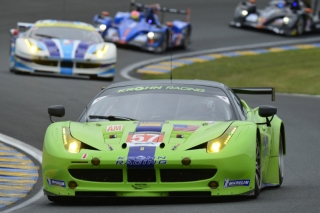 Le Mans, 20 June – This weekend will a very strong show from Ferrari at the legendary circuit of Le Mans in the Sarthe region. In addition to the eight Ferrari GTE cars, the crowds can also enjoy a 45 minute race (with compulsory pit stop) from the Ferrari Challenge Europe.
In the LM GTE Pro category the prancing horse will be represented by three cars, two entered by AF Corse and one by JMW. The clear favorite must be with last year’s winners in car #51 Gianmaria Bruni, Giancarlo Fisichella and Matteo Malucelli. A strong group that have shown well in practice.
In the second AF Corse Pro-car #71 is the regular WEC pairing of Toni Vilander and Kamui Kobayashi the latter making his first appearance here. FIA GT winner and ALMS champion Olivier Beretta completes the trio here. “We are well prepared,” said Amato Ferrari, AF Corse Team Principal. “We have the best drivers, our cars have the best preparation we could give them and we will have to try our hardest to beat the competition. We just hope that the rain stays away, but we are prepared for both.”
The third pro-car #66 is entered by British team JMW, The team is led by experienced Italian driver Andrea Bertolini and he is joined by rookie Khaled Al Qubaisi from the UAE – the winner of the Dubai 24 Hours in 2012 and 2013 – completing the driver line up is Abdulaziz al Faisal from Saudi Arabia back for his second attempt at Le Mans. After an accident in free practice the car has undergone an extensive rear end re-build, but thanks to the hard work of the mechanics, the car will take part in qualifying tonight.
In the ever popular GTE-AM category, where Gentleman Drivers are able to compete alongside their professional team-mates there are five Ferrari. Three again come from the AF Corse Team – #54 has an all-Rookie driver line up. All former Ferrari challenge drivers Howard Blank, Yannick Mallegol and Jean-Marc Bachelier. The #55 car has drivers with a mix of experience Lorenzo Case will enjoy his rookie race after impressive appearances in the Dubai 24 Hours and the Italian GT championship and as if 24 Hours of racing was not enough – he will also compete in the Ferrari Challenge support race. He is joined by experienced Hong Kong driver Darryl O’Young and Piergiuseppe Perazzini in his third Le Mans adventure. Completing the AF Corse lineup is #61 with rookie Jack Gerber from South Africa being joined by highly experienced Italian Marco Cioci who finished fourth in the Pro category in 2012. The final man of the trio is Irish man Matt Griffin in his second Le Mans.
Krohn Racing lead by charismatic American Tracy Krohn have had a torrid time leading up to the race with two heavy crashes with Krohn at the wheel. They now struggle to re-build the car in time from a donor machine so he, Niclas Jonsson and Maurizio Mediani can take part in the race.
The Ferrari endurance grid is completed by the American entered 8 Star Motorsport #81 car in which Australian V8 Supercar star Jason Bright will make his Le Mans debut. He is joined by Vicente Potolicchio and Rui Aguas who finished 6th in this category last year.
Qualifying takes place tonight between 19:00 and midnight, Friday will see the drivers parade in downtown Le Mans and the race is flagged away at 15:00 on Saturday. One thing is sure the Ferrari teams will be doing all they can to gallop over the finish line in first place.