The man who drives all the Ferraris 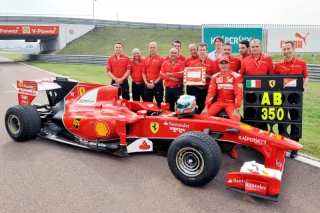 Maranello, 10 September – He has now tested 350 Formula 1 cars that have been sold and has driven every Formula 1 car from 1974 to the present one, with the exception of the 1982 126 C2, a winning car that was also a very unlucky one and he has also contributed to the development of the some of the most beautiful Maranello GT cars. For a long time, he also held the Fiorano track record. He is Andrea Bertolini, born in Sassuolo in 1973 and he has spent his entire career in Ferrari, he’s a star in Endurance racing with the 458 Italia GT2 and GT3, as well as testing for Scuderia Ferrari and the customer owned Formula 1 cars, which he shakes down before they are returned to their owners after periodic maintenance in Maranello.

How did Andrea Bertolini’s life at Ferrari begin? “I was 17 years old when I started to work in the factory. I worked on the test bench and at the same time I used to race karts, following my dream of becoming a racing driver. I hadn’t passed my test yet when I got the chance to drive five laps of Fiorano at the wheel of a 355 Challenge. Those five laps changed my life, because the chief test driver, Dario Benuzzi, took me under his wing and taught me the trade. In the morning I worked on the cars and in the afternoon I did kilometres with Benuzzi, learning precious lessons for my career.”

For example? “Getting to understand all aspects of a car’s handling in the shortest time possible. Working in the factory, I learned the details first, such as how the engines are made and then every aspect of the cars. Knowing about them down to the smallest detail, because I was part of the process of building them to perfection, helped me as a driver. Once, Benuzzi said, ‘Andrea has developed a degree of sensitivity which means he can adapt his driving style to any problem that might present itself and so he always brings home the result,’ an assessment I’m very proud of. The first time I was in charge of development of a Ferrari was the 360 Challenge Stradale: I was with it from start to finish and with this car I developed an almost symbiotic relationship, a relationship I then had with all the other Ferraris I’ve worked on.”

Then came Formula 1… “When Ferrari began selling its old Formula 1 cars, while still maintaining and preserving them in the garage, I was involved in the project. A driver was required to test them while they were being worked on. I still remember the first Formula 1 car I drove, a 1995 412 T2. It was an incredible car, 12 cylinders, really well made, to the point that, when he tested it for the first time, Michael Schumacher, who had just joined Ferrari, asked how it had never won the World championship. I still remember that day very well. I’m not the sort to get easily excited, but when I got in the cockpit and the mechanics fired up the engine behind me, I shivered with excitement. For a moment, I felt like a child again, when I used to go and watch the Ferraris running at Fiorano and my idol Gilles Villeneuve, and I told myself that one of my dreams was coming true, driving a Ferrari Formula 1 car actually at Fiorano. That moment is still the most exciting moment of my professional life.”

From then on, you have driven a lot of them… “The oldest that came into my hands was the 312 B3-74, an incredible car, which I am very fond of. From that model onwards, I drove all the Scuderia’s Formula 1 cars up to the 1982 car. It’s not easy to rate them in order. I am very keen on the 1974 car: it’s like a kart, but a bit bigger and more powerful, very light and you can drive it in a controlled slide. It was dangerous and driver safety was pretty precarious, but it was like that back then. Then I love the 1988 F187/88, the last turbocharged Ferrari prior to the F14 T, easy to driver and incredibly agile despite its traditional gearbox. However, the essence of the ability to innovate that is typical of Ferrari is found driving the F1-90 with which Alain Prost came close to taking the title. I’ve already spoken about the 1995 car, then there are the cars from 1999 and 2002 and 2004, the record breaking cars, extraordinary cars with which I could have had my say…

However, your racing career developed in the field of GT racing… “Yes, starting in 2001, even if paradoxically my debut came in a Porsche. I took holiday to drive it but that season, I did enough to get noticed and convinced Ferrari to entrust me with one of its cars. It was in 2002, the car was a 360 Modena N-GT  which Andrea Garbagnati was keen for me to drive. In 2003, I lost the FIA GT title at the last race because of a banal failure, but by then my career was launched. That year, I also started as a test driver for the Formula 1 team, (a role he still plays today,) while on the racing front, my opportunity came when I was involved in the Maserati MC12 project in the FIA GT1 championship. I was called up by Jean Todt and the head of the project Giorgio Ascanelli and, along with Claudio Berro involved, we began in 2004 and in 2006 we took the title, doing it again in 2008, 2009 and 2010.

And today, you’re involved in several championships. “I am a Ferrari driver (and also with Maserati) and, when one of our main customer teams asks the company, I go and race their car. This year, with prestigious teams such as AF Corse and SMP, I’m racing in the European Le Mans Series, in the WEC (World Endurance Championship,) in the American USCC series and I took part in the Spa-Francorchamps 24 Hours in the Blancpain series. Alongside their drivers, I try and get the best possible result and when I manage to take a team to victory I enjoy, apart from the personal happiness, that of the guys I’m racing with. They really are great experiences.

The race of your life? The 2006 Spa-Francorchamps 24 Hours with Maserati: it was an incredible fight with the factory Aston Martin. Me and my team-mates, the Belgian Eric van de Poele and the German Michael Bartles, both of them with Formula 1 experience, lapped at qualifying speeds for the whole 24 hours. I remember that 30 minutes from the end, they were leading by 8 seconds. In the final half hour we managed to pull out a dozen to be first past the chequered flag. What a show!”

We’ve talked about your favourite Formula 1 cars, but what about the GT machines? “There have been many, but I’ll cut it back to three: the 360 GTC that I developed from start to finish, as were the Maserati MC12 and the 458 Italia GT2 and GT3, which I’m racing now, cornerstones in the history of endurance racing. Coming up with a list among the road cars is harder, as they are all amazing.”

Have you tested the LaFerrari? “Yes, on roads and on the track and when it comes to this car, I have to admit something: for a driver, used to racing cars, a road car on track doesn’t give quite the same feeling right to the limit, because inevitably, they have to be built to deal with every type of road surface, while for the track you just need maximum stiffness. But this argument doesn’t apply to the LaFerrari. Before I’d driven it, I didn’t understand the significance of the name. Once I got behind the wheel, I changed my mind completely: I understood the name LaFerrari for a car that is unique and unrepeatable.”

Between simulator work and still secret projects, do you drive for Ferrari every day? “Yes, every day, but precisely because of the secret nature of some projects, I’d rather not say anymore…”