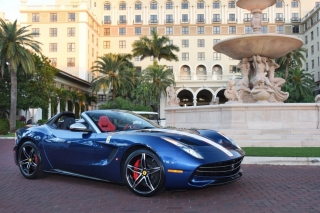 The hand-over at the Palm Beach Cavallino Classic

Palm Beach, 25th January – The first F60 America was delivered this weekend to the delight of a discerning crowd of Ferrari collectors and enthusiasts during the 25th annual Palm Beach Cavallino Classic.

This strictly limited-edition car, which was produced to commemorate the 60th Anniversary of Ferrari in America, is the first of just ten to be delivered nationwide. The car pays homage to American clients’ great passion for both the V12 engine and open-top driving. The F60 America’s bodywork adopts the classic North American Racing Team livery, and the special Ferrari 60th Anniversary Prancing Horse badge on the wheelarches appears on the tunnel in the cockpit. 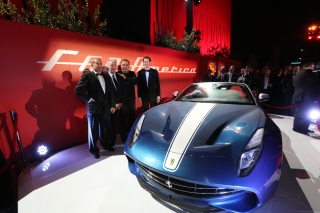 Beverly Hills, 11 October – Ferrari celebrated its 60th anniversary in the USA with a lineup of musical performances, a thrilling auction, limited-edition car reveal, and a boisterous spectacle of fireworks behind a scenic Beverly Hills backdrop.

The Beverly Hills City Hall was bathed in rosso Ferrari with the emblem of the Prancing Horse displayed in grandeur on the building’s façade. Mayor Lili Bosse opened the evening with a proclamation declaring the commencement of the festivities for Ferrari’s 60th anniversary in Beverly Hills. The event was presided by John Elkann, Chairman of FCA, Sergio Marchionne, CEO of FCA and Chairman of Ferrari, Amedeo Felisa, CEO of Ferrari, and Piero Ferrari, Vice Chairman of Ferrari.

Auctioneer David Gooding brought the guests to their feet as he auctioned the first of 499 examples of the newest 458 Speciale A. The car sold for $900,000 with proceeds benefitting “Daybreak,” the American branch of the Italian charity whose mission for nearly 25 years has been to advance research towards a cure for rare genetic diseases.

The 458 Speciale A wasn’t the only Prancing Horse on display. In honor of the Ferrari’s era in the USA, the limited-edition F60 America was unveiled to private guests of the black-tie event.

A lavish display of fireworks concluded the evening’s celebration.

The festivities continue tomorrow with an exhibition of 60 of the most iconic Ferraris ever created on the famed Rodeo Drive. Highlights of the Ferraris to be displayed include the Ferrari 308 GTS (“Magnum, P.I”), Testarossa (“Miami Vice”), and Steve McQueen’s Ferrari 275 GTB/4, the 2014 Pebble Beach “Best of Show” winner 375 MM, and the newest limited-edition F60 America. 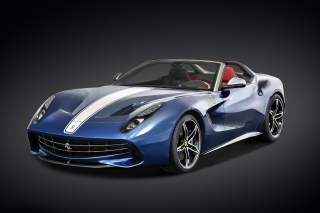 A new Ferrari to commemorate 60 years in America

Maranello, October 10th 2014. To celebrate Ferrari’s 60th year in North America, Maranello has returned to its 1950s and 60s tradition of producing strictly limited edition, built-to-order cars. The result is the F60America, of which just 10 will be produced. The new car combines our American clients’ two great passions – the V12 engine and open-top driving – and is being unveiled tomorrow evening at an anniversary celebration gala dinner at Beverly Hills City Hall.

The powerful and innovative mid-front-mounted V12 and specific gear ratios underscore the F60America’s wonderfully sporty character. The F60America’s personality is instantly clear from its flanks which are characterised by an innovative diapason design theme.
The front of the car is dominated by the classic Ferrari single front grille with chrome finish and integrated air intakes for the brakes.

The cabin’s asymmetrical design highlights the driver’s area with sporty red trim, while the passenger side is black, inspired by the historic Ferrari competition cars. The cabin trim is exclusive with the dash, tunnel and door panels on the driver’s side all swathed in composite materials. The racing seats also feature a stylised American flag motif on the centre of each seat and backrest.

The F60America’s bodywork adopts the classic North American Racing Team livery, and the special Ferrari 60th anniversary Prancing Horse badge on the wheelarches also appears on the tunnel in the cabin.

The wonderfully elegant and unique F60America has entranced US collectors and all 10 examples are already spoken for. 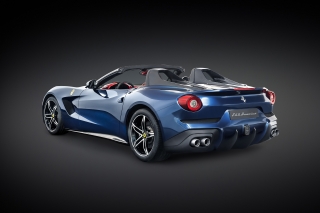 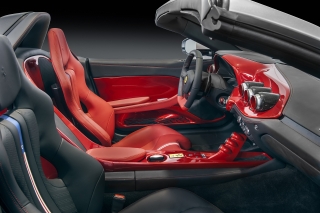