A special interview with Fernando Alonso

A special interview with Fernando Alonso 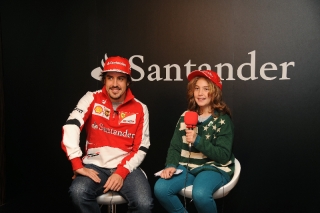 Maranello, 14 January – Fernando Alonso’s first interview of 2014 was granted to a definitely special and lucky journalist. Daniela is a nine year old Spanish girl who won the “Journalist for a day” competition organised by the Santander Bank, at a pre-Christmas event held in Madrid by the Scuderia Ferrari partner.

A lot of topics were covered during the interview, from those of an essentially sporting nature, with a particular emphasis on prospects for the forthcoming Formula 1 season, to more personal matters, such as the significance of the Samurai figure tattooed on Fernando’s back. During the interview, Daniela demonstrated an easy going approach, enthusiasm and ability: a good debut for this budding journalist!