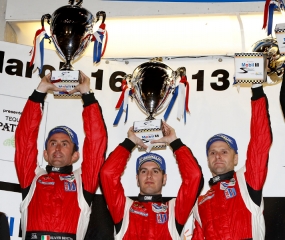 A 458 Italia on the podium at Sebring 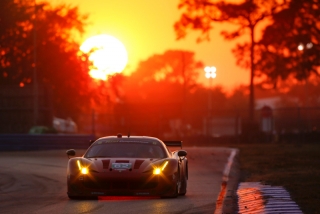 Maranello, 17 March –The Risi Competizione 458 Italia finished second in class at the Sebring 12 Hours, the famous endurance race held this year for the sixty second time. At the wheel of the 8 cylinder car entered by the Ferrari of Houston team, Gianmaria Bruni, Matteo Malucelli and Olivier Beretta drove an attacking race throughout, producing a perfect combination of car, strategy and teamwork. Having started from pole and dominated the race right up until the final hour, the Risi Ferrari had to give best to the Corvette C6 of Oliver Gavin, Tommy Milner and Richard Westbrook, when Malucelli was at the wheel. “Even if the Corvette was too quick for us to have considered keeping ahead of it, I gave it my best shot,” said the driver from Forli. “My efforts were in vain, but I know I did the best I could and all the same, this second place is worth valuable points for the championship.” Olivier Beretta echoed his sentiments, underlining the fact that “it is a good result for a team that was only racing together for the first time and I am very pleased with how things went. We were competitive throughout the weekend and even if we would have preferred to win, we know we all did a great job. I can’t wait to tackle the next races!” Gianmaria Brui was also pleased and made this analysis of the race; “Today our rivals were really quick. In the past, it’s happened that I’ve been the quickest and won and there were other times when that wasn’t enough. Maybe the Corvette was readier than we were, but I am still pleased for Risi and for Ferrari. The team hadn’t raced for a year and now we are already second behind the 2012 champions. We have great potential and I’m sure that Matteo and Olivier will be able to always get better.”
The next round of the American Le Mans Series takes place on 20 April in California, at the Long Beach circuit.