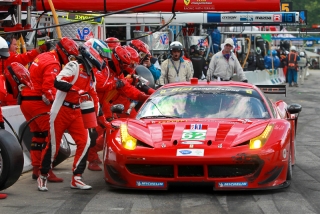 At a baking Lime Rock park it was a disappointing race for the Risi Competizione car of Matteo Malucelli and Olivier Beretta.

The Houston based team qualified the Ferrari 458 fourth on the grid and managed to avoid the incidents and contact in the first laps. Beretta moved the car up to third place but began to experience problems with his rear tyres.

The team brought the car in slightly earlier than planned after 67 minutes of the race, unfortunately just as the car stopped, the PC car in the neighbouring garage also pitted and clipped the Ferrari moving the car and knocking down two mechanics who were thankfully unharmed. Beretta handed over to Malucelli and the car took on a new set of tyres and fuel but the stop took much longer than usual.

After a full course caution was called the team took the decision to pit for tyres and enough fuel to take the car to the end of the race. The move saw the team in an excellent position to finish the race where other were forced to stop again. However the strategy of the team would prove fruitless as with just two minutes of the race remaining Malucelli collided with another car and ended the race in the barriers.

Team Principal Giuseppe Risi said afterwards: “I am extremely disappointed with the outcome of the race, but have to praise the Risi team for the job they did to that point. The engineering strategy was superb, and was wholly responsible for us making a return to a potential point-finishing position, and the crew did a perfect job in the pits under difficult circumstances.”

The second Ferrari in the race run by Team West / AJR / Boardwalk Ferrari driven by Bill Sweedler and Townsend Bell finished the race just ahead of the Risi car in tenth position.

The next round of the American Le Mans Series will be the Mobil 1 Grand Prix of Mosport on Sunday July 21st.