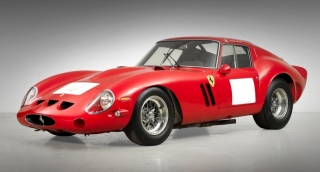 Maranello, 16 August – At the Bonhams auction, records were shattered as the 1962 Ferrari 250 GTO, chassis number 3851 GT, was sold for $38,115,000 USD. This is the most ever paid for an automobile at auction, underscoring the unrivaled desirability for Ferrari in the collector car market and the continued dominance of the brand at auctions worldwide.

This Ferrari 250 GTO is now, effectively, the most valuable and coveted car in the world.

This car was the 19th Ferrari GTO to be completed and was invoiced on September 11, 1962. It was originally finished in metallic pale grey with lengthwise red, white and blue centerline stripes when acquired by its first owner, French privateer Jo Schlesser, who was also a Formula 1 driver.  Its last owner was Italian Fabrizio Violati and the car was part of his Collezione Maranello Rosso.

No other mark is commanding attention and achieving such spectacular values so far in Monterey like Ferrari, with total Ferrari sales at Bonhams totaling just under $65 Million USD. Additional notable sales include: 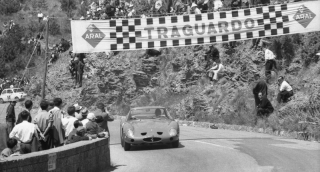 After Thursday night’s exciting, record-making sale of the 1962 Ferrari 250 GTO, which made history when it achieved over $38-million, making it the most valuable car to ever be sold at auction, Bonhams went on to set several more records.

The 1963 Rolls-Royce Phantom V Touring Limousine that belonged to, no less, the King of Rock ‘n’ Roll was the subject of spirited bidding and was ultimately won by an American collector for $396,000 (£237,283), smashing its pre-sale estimate and setting a record for the model.

Says James Knight, Bonhams Global Head of Motoring, “The growth of the Bonhams motorcar department over the past few years has been tremendous, particularly in the USA. The 2014 Quail Lodge auction clearly demonstrates Bonhams’ position as a serious player and the go-to auction house to achieve world records. We already have some exciting motorcars lined up for our next auctions both in America and in Europe.”

Malcolm Barber, Bonhams Co-Chairman, adds, “As always, it’s been a pleasure to partner with The Quail: A Motorsports Gathering, one of the world’s premier collector car events, and bring a truly blue chip selection of motorcars to Carmel. We made history over the last two days and we are very satisfied with the results.” 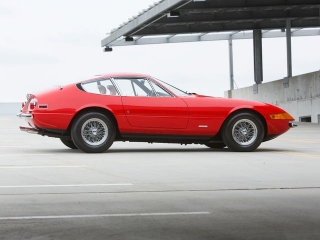 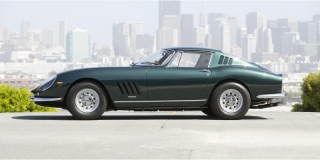 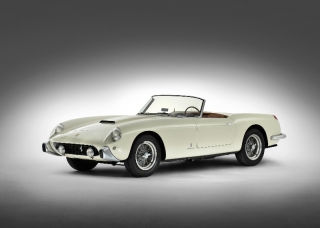 The magnificent Ferrari 250 GT Pinin Farina Cabriolet destined for Bonhams Quail Lodge Sale is a very early, stylish example, and only the eighth of some 40 units ever built.

Having spent its life in Italy and Venezuela, it now travels to California for the highly anticipated auction, with an estimate of $6.5 million to $8.5 million (£3.8 million – £5 million). It will be offered without reserve.

Its chassis frame was delivered to the Pinin Farina plant in September 1957, and upon the assembled car’s completion with this strikingly handsome body it was promptly exhibited at the 39th Salone dell’ Automobile in Turin’s Valentino Park exhibition hall.

In January 1958, this Cabriolet was then shipped to the Venezuelan Ferrari importer, Carlos Kauffman, in the central-American state’s capital city of Caracas.

Newly registered on Venezuelan plates, it was later pictured in the factory’s official 1959 Ferrari Yearbook, whose compilers every year made much of the burgeoning marque’s growing global appeal. On the streets of Caracas the car turned all heads with its original white paint scheme later changed to a bright green hue. Its original price there was at 80,000 Venezuelan Bolivares.

The car later received its first private owners in Luis and Carmen Perez Dupuy. The pair went on to sell it to a Mr. Gustavo Guttierez, who retained the car until 1986 (by which time it had been repainted bright red). Ultimately, in 1991 it was inducted into the Maranello Rosso Collection in San Marino, and returned to its native Italy.

This magnificently imposing Cabriolet has been well maintained and most sympathetically restored, with its exterior Bianco paintwork providing a striking counterpoint to its Pelle Naturale Conolly leather upholstery.

Of all the road-going Ferraris from the Maranello Rosso Collection, this ex-Carlos Kauffman, 1958 Turin Show car, is particularly admired as a Ferrari of enormous distinction, rarity and surviving originality. 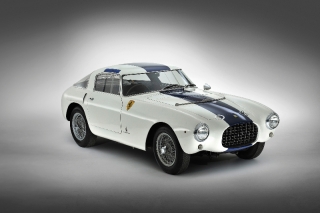 One sale, ten Ferraris, decades of history – and the epitome of Italian style. Bonhams is delighted to announce the ten most desirable Maranello Rosso Collection Ferraris, due to make their auction debut on 14th August at Quail Lodge in Carmel, California.

Robert Brooks, Bonhams Co-Chairman, said: “At Bonhams, we’ve had the privilege to present our clients with some very special motor cars and collections, but this is without doubt our most astounding collection, for sale at Quail Lodge this August.”
“Fresh from the halls of the Maranello Rosso Museum we offer our select cross-section of ten cars from this renowned, long-established family of Ferrari’s finest, spanning the marque’s entire great classic period from the early 1950s to the early 1980s. The selection can be appreciated across the broad spectrum of Ferrari fans, and we’re delighted to have the opportunity to offer them – It’s set to be a very exciting sale for Bonhams – and for the entire Collector Car market.”
The ten entries from the Maranello Rosso Collection are:
The 1953 Ferrari 250 Mille Miglia Berlinetta is a particular sale highlight. Tailor-made to compete in frontline long-distance races, in May 1954, Road & Track magazine tested future World Champion Phil Hill’s own sister Ferrari 250MM and recorded 0-60 mph acceleration in just 5.1 seconds, 0-100mph in 13.7. “Never before have I accelerated so rapidly, traveled so fast, or decelerated so suddenly,” wrote the magazine’s editor.
An outstanding example of Ferrari’s first 3-litre V12-engine Gran Turismo, it launched the line that later extended over the 1950s, giving us the 250 Tour de France, the 250 GT Short-Wheelbase, and 250 GTO models.
The cars’ racing history began appropriately in California in 1953, with American enthusiast and racer, Bill Devin.
He made his public debut in the new Ferrari at the Sports Car Club of America San Francisco Region’s 3rd Annual Members’ Madera race meeting in September that year. He promptly finished third in the novice event before handing the car over to fast-rising Santa Monica star driver Phil Hill, who won the main event there that day.
Bill Devin subsequently appeared with this Ferrari 250MM – finished in the American white-and-blue racing livery it wears today – at Stead Air Force Base in October, 1953, while his brother Gene Devin drove it at March AFB that November.  In June 1954 the car was sold to Ken Heavlin, who ran a luxury car garage at Grosse Point, Michigan.
After Devin’s ownership, the car changed hands several times, eventually in 1986 returning to its native Italy, joining the collection of Count Vittorio Zanon di Valgiurata.
He co-drove the car in that year’s Mille Miglia Storica event and in 1987 it again attacked the daunting thousand-mile course from Brescia to Pescara, across to Rome, and then back to Brescia via Florence and Bologna.
Count Zanon sold it then to Rudi Pas/Classic Car Associates in Holland, who found a Japanese buyer in a Mr. Shimada. However, the car was quickly returned to Pas and it was in the winter of 1987-88 that this Ferrari – with its early-career Phil Hill Californian history – was acquired for the Maranello Rosso Collection.
Each of the Ferraris offered in Bonhams Quail Lodge sale has a rich and varied history, offering an intriguing showcase of the evolution of the marque from the 1950s to 1980s.
Details for the highly anticipated two-day auction can be found at  Bonhams.com/Quail.

1 July 2014 – Hot on the heels of the Bonhams Motor Car Department selling £24-million-worth of mouth-watering machines at the Goodwood Festival of Speed, the company announces ‘Ten Important Motor Cars from the Maranello Rosso Collection’, to be sold at its annual Quail Lodge auction on the Monterey Peninsula, California, in August.

The Sale will be headed by the world’s longest single-ownership Ferrari 250 GTO Berlinetta – which has effectively been in one family’s care for no fewer than 49 years from 1965-2014. The car is to be offered for sale by auction AT NO RESERVE on August 14-15.

The enduringly gorgeous 250 GTO’s appeal is its rumbustious renown as a GT World Championship-winning road racer, as startlingly streamlined winner of the fantastic multi-day Tour de France Automobile, and yet also as a perfectly civilised and road-useable shopping car. The 250 GTO is the most coveted jewel in the classic car world’s crown, a beauty in which an owner can show his prowess on track one day, and then go touring beside a comfortably seated companion the next.

The Maranello Rosso Collection car, chassis number ‘3851 GT’, was the 19th 250 GTO Berlinetta built, completed new on September 11, 1962. It was delivered to the leading French racing driver Jo Schlesser, to be co-driven by himself and French ski Champion Henri Oreiller in the 1962 Tour de France. The pair challenged for victory and finished an honourable second overall. The car was then crashed during a race at Montlhery Autodrome, just south of Paris, France. It was repaired immediately by Ferrari in Italy and was sold to gentleman driver Paolo Colombo in time for the 1963 competition season.

At the time of ‘3851 GT’s re-emergence the latter half of Ferrari 250 GTO production was still in full swing at Maranello and in the Scaglietti body plant in Modena. Paolo Colombo enjoyed a very successful season in ‘against-the-clock’ Italian national mountain-climb events, before selling it to Ernesto Prinoth for 1964. He then used the car widely in both mountain-climbs and circuit races, again with fine results.

In 1965 young Fabrizio Violati bought the ageing car. He would recall: “I saved the car from scrap and hid it from my parents. I only drove it at night so nobody would see me”. For almost 40 more years , Fabrizio Violati then enjoyed his fabulous Ferrari 250 GTO in classic car and Historic racing events – and it became one of the last to compete regularly right into the 2000s, maintained in the Maranello Rosso Collection until his passing in 2010.

13 June 2014 – San Francisco – There is simply no other sports and racing marque as famous as that of Ferrari. Whether vintage, classic or contemporary, cars with the Prancing Horse badge command the utmost interest around the world. And so it is with real pleasure that Bonhams – renowned for its history in representing great racing and sporting cars – has consigned several cars from the Maranello factory to its Quail Lodge Auction in Carmel this August. Following is a selection of these impressive machines.

A stunning 1966 Ferrari 275 GTB – the fifth from last built and, with its torque tube and long nose, the most developed version of this famous model – benefitting from a correct and immaculate cosmetic and mechanical restoration by renowned marque specialists. With matching numbers and thorough documentation, this original US-delivered car is just one of four of the model to have left the factory in colour Verde Scuro.

The 12th of just 17 built, this scarce 1952 Ferrari 212 Europa Coupe by Pinin Farina is not only a matching-numbers car certified by Ferrari Classiche, but also a Mille Miglia Storica veteran and a Tour Auto participant.

And as previously reported, two other Ferraris of note include Pat Boone’s 1966 330 GT Series II Coupe, which was delivered new to the singer by Luigi Chinetti and has recently undergone a superb “nut and bolt” restoration, and a 1973 365 GTS/4 Daytona Spider that must be considered one the most original and finest preserved examples of the model in existence.

These and other Ferraris, such as a 1971 365 GTB/4 Daytona Berlinetta with less than 6,600 miles from new, and a 1973 Dino 246 GTS that has been in the same ownership for nearly four decades, will go under the hammer on Friday, August 15th, at Quail Lodge in Carmel, California.

With the consignment deadline rapidly approaching and just a few spaces remaining for further additions, owners of special automobiles are encouraged to contact the Bonhams International Motoring Department posthaste, at motors.us@bonhams.com or 415-391-4000.

For more information on this anticipated auction, please visit www.bonhams.com/quail