A festival of beauty on Lake Como 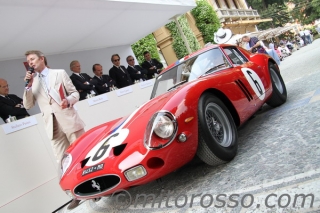 Munich/Cernobbio. Last weekend, Cernobbio on Lake Como once again became a magnet for car and motorcycle fans from far and wide. On display at the Concorso d’Eleganza Villa d’Este were a range of classic automobiles and cutting-edge concept cars that thrilled the crowds who had flocked there. Visitors were already making a beeline for the grounds of Villa Erba on Saturday to witness the motorcycle Concorso. At the end of another marvellous weekend on the shores of Lake Como, the Concorso d’Eleganza Villa d’Este proclaimed its worthy winners on Sunday. The judges and the public were of one mind: the Alfa Romeo, 6C 1750 GS, 6th Series Coupé, Figoni of 1933 claimed the Trofeo BMW Group presented by the jury, and thus the Best of Show accolade, while also securing the public prize, the Coppa d’Oro Villa d’Este. In the Concept Cars and Prototypes category, meanwhile, the winner was the Alfa Romeo 4C . Appearing out of competition in this year’s line-up was the BMW Zagato Coupé, making a high-profile world debut.

“We experienced a high-calibre event with a unique field of competitors,” said Karl Baumer, President of the Concorso d’Eleganza Villa d’Este and Director of BMW Group Classic, reviewing the 2012 Concorso with obvious satisfaction. “We are particularly delighted at the splendid turnout of almost 6,000 visitors on Sunday,” he added. Danilo Zuchetti, President of Villa d’Este S.p.A., was equally pleased with the weekend’s success: “We witnessed a Concorso that is second to none in terms of sheer class and quality.”

The Trofeo BMW Group in the second Concorso d’Eleganza Villa d’Este for motorcycles was awarded to the Italian Gilera 500 Rondine from the Museo Piaggio. Hendrik von Kuenheim, Director of BMW Motorrad, took stock after the second edition of the motorcycle Concorso: “This Concorso reflects the enthusiasm and sheer passion we have been pouring into our motorcycles for almost nine decades now.” 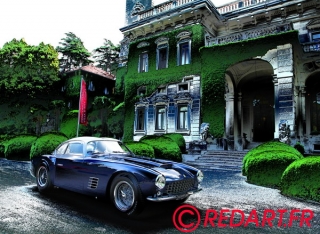 Another Ferrari Classiche restoration attracts the crowds at Villa d’Este 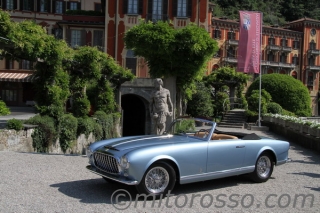 Maranello, 28 May 2012 – Another important restoration by the Ferrari Classiche department debuted at the prestigious Villa d’Este Concorso d’Eleganza this weekend on the shores of Lake Como. The car, a 1952 212 Inter Cabriolet (chassis number 0235EU), is historically significant as it is only the second car ever to have been built by Pinin Farina who went on to become Ferrari’s coachbuilder of choice.

The 212 Inter Cabriolet was first shown to the public at the Paris Motor Show in November 1952 before being sold to its first owner, Tony Parravano of Rome, by the then US importer, Chinetti Motors.

In August 1953 the car was famously entered at the Nürburgring 1000 km by film director Roberto Rossellini where it was driven by Maurice Gatsonides – the Dutch racing driver best known for inventing the Gatso speed camera – and Riccardo Vignolo, to finish an incredible 9th overall.

Now in the hands of American Ferrari collector, Kenneth B. Roath and his wife Dayle, the matching-numbers 212 Inter Cabriolet was returned to Ferrari in the autumn of 2010 for a complete and meticulous restoration in its original Azzurro over beige livery using both the factory’s archives and period photos.

The department was set up in 2006 to provide owners of classic, veteran and historic Ferraris with dedicated maintenance, repair and renovation services, technical assistance and authenticity certification. So far over 3,300 certification requests have been processed. The certification process involves researching the original designs of the historic Prancing Horse cars held in the Company’s own Archive which houses details of all of the GT, competition and sports prototype cars built by Ferrari since its foundation. Any work done on the cars is carried out in compliance with those original designs. In all, 55 full restorations have been carried out in Ferrari Classiche’s dedicated workshop. 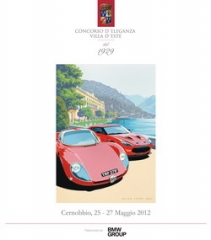 Munich/Geneva. The vehicles are hand-picked, the number of participants is strictly limited, the backdrop is simply unique: the Concorso d’Eleganza Villa d’Este is regarded as one of the most exclusive events in the world of classic automobiles and motorcycles. “Our aim is to preserve this exclusive ambience while at the same time welcoming further enthusiasts who are keen to experience the Concorso,” says Karl Baumer, President of the Concorso d’Eleganza Villa d’Este and Director of BMW Group Classic, outlining the target for the years ahead. “That’s why we want to extend the public day into a classic weekend.” Dott. Jean-Marc Droulers firmly corroborates this aim on behalf of the Grand Hotel Villa d’Este: “We would like to share our enthusiasm for the Concorso with more people.” Whereas in the past the grounds of Villa Erba in Cernobbio were only open to the public on the Sunday for a viewing of the Concorso’s historic automotive gems, last year saw its gates unlocked on the Saturday as well. This year the Concorso will open up even earlier, namely on Friday evening, allowing visitors to enjoy an Italian festival and open-air cinema.

The motorcycle Concorso, which had its debut last year, enters its second round in 2012. A total of 30 two-wheelers, along with a special exhibition of design studies, will undergo the judges’ scrutiny in this second edition of the Concorso di Motociclette. A new feature this year is a ride from Como to Cernobbio, where the motorcycles will gather at the main square next to the boat pier.

Then everyone will ride together to the exhibition in the grounds of Villa Erba, where the jury will assess the motorcycles for the first time. The motorcycle Concorso itself will not take place on Saturday but on Sunday morning so as to avoid clashing with the automobile Concorso at Villa d’Este. Another change from last year is that the motorcycles will not merely be displayed in stationary mode, but – following the example of the cars – their owners will ride them along the red carpet. That way visitors will be able to experience the cherished two-wheelers with all their senses.

Small in size, big on charm

In close vicinity to the two-wheelers, a rather special vehicle species awaits visitors to Villa Erba. With a display of some 30 microcars and bubble cars, the Concorso reveals a thoroughly different world from that of the sumptuous treasures that normally dominate the image of the Concorso d’Eleganza Villa d’Este. Yet it is a world that has always shown – and still shows – the same passion for and delight in automobiles. “These cars simply ooze charm, and with the Isetta we also have a representative of this hugely appealing vehicle segment,” smiles Karl Baumer in happy anticipation of seeing these “tiddlers” on Lake Como.

As from 2012, the Concorso d’Eleganza Villa d’Este will be joined by a new partner – watch manufacturer A. Lange & Söhne. For Karl Baumer this involvement marks an important new strand in the ongoing evolution of this upmarket event: “The A. Lange & Söhne brand is an international byword for elegant design, technical creativity and consummate craftsmanship. With this company, we have joined forces with a partner similarly inspired by the past to shape the future.” CEO Wilhelm Schmid explains what prompted this involvement by A. Lange & Söhne: “In the Concorso d’Eleganza Villa d’Este we experience a passion for technology and elegance at its most beautiful. It is the same fascination which our timepieces exert on collectors and connoisseurs. We want to use this unique framework to share our devotion to style and elegance with our customers and fans.” The winner of the Concorso d’Eleganza Villa d’Este will certainly remember the Glashütte-based company for a long time to come: whoever wins the “Best in Show” category – the most important accolade in the competition – will be awarded an exclusive special edition of the LANGE 1 TIME ZONE by A. Lange & Söhne. The hinged caseback of this Cuvette wristwatch is specially hand-engraved to mark the occasion, while Central European Time (CET) on the city ring of the time zone watch is represented by the town of Como.

The heart of the Concorso

As ever, the heart of the Concorso beats at Villa d’Este, where automotive beauties and rarities have been vying for the favour of the jury and the public since 1929. The entry list for this year’s Concorso is closed and the race for the coveted starter places is over. Against the backdrop of the Geneva Motor Show, Dr Ralf Rodepeter, Director of the BMW Museum and member of the Selecting Committee of the Concorso d’Eleganza Villa d’Este, provided a small taster of the 2012 field of entrants.

The success story of the Ferrari GTO – an undisputed icon of motoring history – began 50 ago. To mark this anniversary, one of the vehicle categories of this year’s Concorso d’Eleganza Villa d’Este is dedicated to the Ferrari 250, furnishing an overview of the GTO’s entire development history. The Ferrari GTO scheduled for display at Villa d’Este is one of the 32 units that made up Series 1 of this car and was delivered to a customer in France half a century ago. The GTO achieved successes on Europe’s major race tracks such as the Nürburgring, Spa and Zolder. This model had just four previous owners before being acquired by its current owner in the USA.

When the regulations for the Sports Car World Championship were changed in 1956, the decision was made at Aston Martin to build the DBR 1. No more than five works cars were produced in total, based on the Aston Martin DB3 with a 6-cylinder engine displacing 2.9 litres. It was the start of a career that culminated in victory at Le Mans – the first and only win so far by Aston Martin. The DBR 1, which will take part in the Concorso d’Eleganza Villa d’Este, finished second in the 1959 Le Mans event, piloted by two of the greatest racing heroes of their time – Maurice Trintignant and Paul Frère.

The renowned Italian coachbuilding company of Ugo Zagato used the Fiat 500 as the basis for building a 2+2 coupé destined for the race track and powered by a high-compression 479 cc rear engine from Carlo Abarth. The car was unveiled at the Turin Salon in 1957. The 23 hp racing engine propelled the lightweight Fiat (445 kilograms) to beyond the 110 km/h mark and swiftly on to victory in the Italian 500 GT series. This four-wheeled beauty measured just 3.20 metres long, 1.32 metres wide and 1.13 metres high. Only five units were built.

On the weekend of 25th – 27th May 2012, the glorious parkland of the Grand Hotel Villa d’Este and Villa Erba in Cernobbio on Lake Como will again be turned into a unique platform for the most beautiful cars and motorcycles from bygone days, alongside the most flamboyant concept vehicles of the present. Inaugurated at the very same location in 1929, the Concorso d’Eleganza Villa d’Este today ranks as one of the world’s most tradition-swathed events of its kind.

As well as the Concorso for invited guests on Saturday in the grounds of the Grand Hotel Villa d’Este, the Concorso is open to the public in the adjacent parkland of Villa Erba on Friday evening, Saturday and Sunday, giving all car and motorcycle enthusiasts an opportunity to experience these dream models on two and four wheels. In addition to the cars and motorbikes presented on the previous day, many more high-calibre classics will also be on display in special exhibitions.