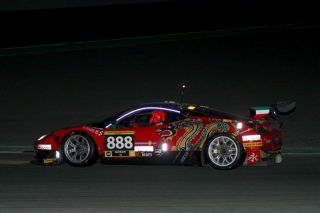 Class win in the Dubai 24 Hours 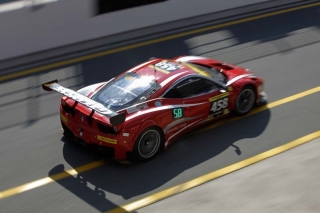 Dubai, 11 January – As is now the tradition, the endurance racing season has got underway with the Dubai 24 Hours. The event, which is open to Touring and GT cars, as well as 24 Hour Specials, featured seven 458 GT3 cars on the entry list, from five teams. The best result was a fourth place overall for the GT Corse car, driven by four Germans, Mattschull, Seefried, Ehret and Kaffer and the Russian Kogay, who finished ten laps down on the winning Porsche 997 of Ineichen-Ineichen-Matter-Amstutz-Engelhart.

Two other Ferraris finished in the top ten: the first of the Emirates Dragon Racing team, with the multinational crew of Kuwaiti Al Mudhaf, the German Grogor, the Saudi Arabian Jawa and the Ivorian Fatien, finishing seventh overall, first in the A6-Am class, while the first of the Swiss Spirit of Race entries crewed by Barreiros-Dhillon-Maris-Scott-Ilya, came home ninth.

The two works Ferraris were out of luck as they made their season debut in Dubai, to put the finishing touches to their preparation for the Daytona 24 Hours which takes place at the end of this month. The reigning world champion, Gianmaria Bruni and Toni Vilander, who were joined by the Talkanitsa father and son duo from Belarus in the second Spirit of Racing 458 GT3, had to retire at just over one third distance with an engine problem. Maybe even more unfortunate was the Ram Racing entry. The crew made up of Cheerag Arya, Matt Griffin, Jan Magnussen and Johnny Mowlem were fighting for the win up to half distance, but was involved in an accident with two other cars, which broke the radiator and also did other damage: the repair cost the team that was ELMS champion last year a lot of precious time and an eventual 17th place overall was a reward for the tenacity shown by the English team.

The two other 458 GTs entered in the race, the Visiom team of Pagny-Perrier-Bouvet-Roy and the second Dragon Racing entry of Barff-Norris-Jones-Hall-Kronfli, did not finish the race.