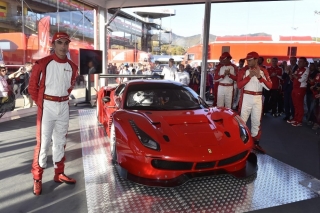 Scarperia, 7 November – The FXX K was presented at last year’s Finali Mondiali in Abu Dhabi. In 2015 at Mugello it was the turn of the 488, which was shown off in its GTE and GT3 versions. Celebrity endorser, Lapo Elkann, paid a visit to the Finali Mondiali on Friday, conducting the award ceremony for the winners of the Ferrari Challenge race and going for a spin as a passenger in an exclusive FXX K.

A car for Le Mans. “Gimmi” Bruni, Toni Vilander, James Calado and Davide Rigon removed the red cloth from the 488 GTE, the car that will race in next year’s World Endurance Championship (WEC) and that was presented in the AF Corse team race livery for next season.

GT racing weapon. Giancarlo Fisichella, Olivier Beretta and Andrea Bertolini, who did the lion’s share of testing, unveiled the GT3 version of the car that will compete in the main domestic and international GT championships. The major break with the 458 Italia is the turbo engine, which also appears on the production model of the car, 488 GTB.