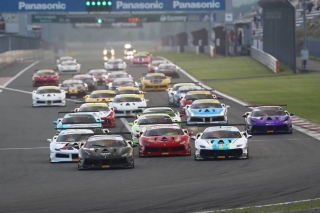 Oyama, 9th July 2017 – The fourth round of the 2017 Asia Pacific Ferrari Challenge came to a close today under warm and sunny conditions with track temperatures at a high of 40 degree Celsius at Fuji Speedway. The 35 drivers in the field once again showcased pure driving exhilaration during Race 2.

Trofeo Pirelli. The race provided lots of drama when it got off to a chaotic start as Yanbing Xing from China spun in the middle of turn 5 and had contact with a few cars. This triggered the safety car for the first four laps and the race restarted after that. Today’s pole position went to newcomer Louis Prette from Italy. Prette lead the race from start to finish and stood on top of the podium steps as his father Philippe, winner of Race 1, beamed with pride. This win got him onto the standings board but his father, Philippe, is still the leader with 123 points after Fuji round. The younger Prette beat Angelo Negro from Italy, who is now second on the standings with 98 points. Finishing third place in the race was Huilin Han from China.

Trofeo Pirelli AM. The race was just as competitive for the Trofeo Pirelli AM drivers. With Tiger Wu from Chinese Taipei once again leading his group, there was a tight battle for first and second places with Ken Seto of Japan, with only a gap of 2.511seconds between the two at the finishing line. Wu finished first and Seto second. With Xing out of the race after the collision, Wu’s win has propelled him to the top of the standings in his class.

Coppa Shell. Eric Zang from China found success for the second time in the Coppa Shell Class. With a valiant race drive, he maintained his lead in his class throughout his race and powered to victory, with Grant Baker from New Zealand finishing second. David Dicker, also from New Zealand, settled for a third place finish. Baker also captured the Gentlemen Cup while Kanthicha Chimsiri from Thailand took the Ladies’ Cup.

Trofeo Pirelli 458. It was the second win in a row for Martin Berry from Australia when he found himself at the top of the podium once again. Berry started first in his class, lead the way throughout the race and steered his Ferrari 458 Challenge EVO to his fifth win of the season. Berry beat Tsuyoshi Adachi from Japan, who finished by a wide 20.826 seconds behind him, while Paul Wong from Hong Kong, finished third. Berry now leads the standings in his class.

Schedule. The next round of the Ferrari Challenge Asia Pacific will be held at Sepang in Malaysia from 25th – 27th August. 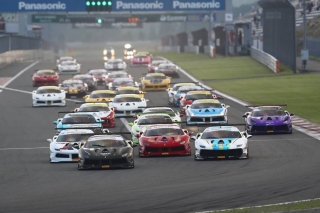 Oyama, 8th July 2017 – Under cloudy skies and sunny conditions, crowds came to see the first race of the fourth round of the Ferrari Challenge Asia Pacific at Fuji Speedway, situated in the foothills of Mount Fuji. 35 drivers from 13 different nationalities saw true competition among the various classes on the 4.563 kilometre circuit with one of the longest straights in motorsport tracks, at 1.475 km in length. This round also saw a record 23 Ferrari 488 Challenge cars taking part in the competition.

Trofeo Pirelli. The practice sessions on Friday proved to be essential as many of the Challenge drivers were new to the Fuji circuit. Understanding the track and getting acquainted with it is crucial for a driver’s success at this circuit, known for its tight hairpin turns and demanding esses at Turn 10. Dominating the first race of the Trofeo Pirelli class was pole-sitter Philippe Prette from Italy, the current leader on the standing board. He took charge of the race and lead from start to finish. Go Max, despite homeground advantage, simply could not find his extra pace to overtake Prette, who crossed the finish line unchallenged. Third position went to Angelo Negro from Italy.

Trofeo Pirelli AM. In the Pirelli AM class, the winner was Tiger Wu from Chinese Taipei. Coming in second for this class was newcomer Angie King of Philippines who recovered from a spin to hold track position, followed by Yanbin Xing from China who was leading before this race and now is one point behind Wu.

Coppa Shell. In the Coppa Shell classification, Eric Zang of China, a relative newcomer as this is only his third racing weekend, was the clear victor. He managed to overtake pole-sitter Makoto Fujiwara of Japan during the second lap and kept his lead all the way to the chequered flag. Fujiwara, who remains leader in the championship standings, dropped two places and ended at the bottom of the podium. Charles Chan from Hong Kong took second position. David Dicker from New Zealand was the winner of the Gentlemen Cup while Kanthicha Chimsiri from Thailand took the Ladies’ Cup.

Trofeo Pirelli 458. Eleven drivers raced in their Ferrari 458 Challenge EVO cars under the Trofeo Pirelli 458 classification. Martin Berry of Australia emerged victorious in this race, taking his fourth win of the season. He held a comfortable lead over Min Xiao of China, who came in second. Tamotsu Kondo of Japan came in third.

Schedule. Track action continues tomorrow for Race-2 of the Ferrari Challenge weekend at Fuji Speedway. This will take place at 4.30 PM local time. 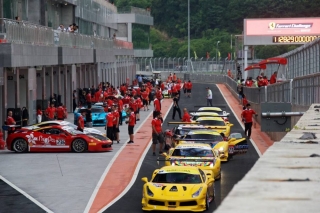 Oyama, 6 July 2017 – The Ferrari Challenge APAC returns for its fourth round of the season, held on the legendary Fuji track at the foot of Japan’s sacred mountain, from July 7th to 9th.

Trofeo Pirelli. Philippe Prette tops the Trofeo Pirelli standings, a perennial occupant of the podium so far this season and with three wins to his name. Zen Low is his nearest rival, with four podiums in five races. Low in turn has a two-point lead over Angelo Negro, winner of the first race of the season in Abu Dhabi.

Pirelli Am. The Trofeo Pirelli Am is the most open of the classes, with the highly consistent Yanbin Xing out in front after four podiums in five races. Three points behind comes home driver Ken Seto, winner in Race-2 at Abu Dhabi, followed by Race-1 victor Tiger Wu, five points off the summit.

Coppa Shell. In the Coppa Shell everyone is expecting a fifth triumph for Makoto Fujiwara, dominant both in Abu Dhabi and Shanghai and eagerly awaited on track by friends and fans keen to see another great performance. Andrew Moon is the first of his pursuers, followed by David Dicker in third who also tops the Gentlemen’s Cup for the over-55s. Thailand’s Kanthicha Chimsiri will be defending her lead in the Ladies’ Cup.

Trophy Pirelli 458. All eyes are on Australia’s Martin Berry who, bolstered by three victories, heads the 458 Challenge EVO class. Min Xiao is in second with three podiums, while Sam Lok, winner of Race-2 in Shanghai, follows in third.