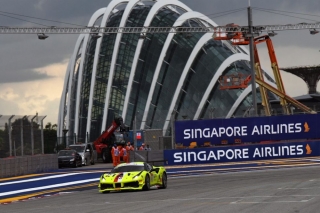 Singapore, 17 September 2017 – The 2017 Ferrari Challenge Asia-Pacific sixth round Race-2 came to a close over the weekend in Singapore in support of the Formula 1 Singapore Grand Prix.  It must have been a huge blessing when the storm came after the race ended and the 29 drivers didn’t have to use their wet tires.

Ringo Chong of Singapore did his home fans proud once again by starting in pole position and leading all the way to the end.  He kept his leadership from the start despite a valiant attack from Zen Low of Malaysia who tried to catch up with him but couldn’t find the extra gear to do so.  The competition was heated between the third and fourth drivers Huilin Han of China and Philippe Prette of Italy as they fought for the last step on the podium.  During the last laps, Prette was too close in his attempt to overtake Han and made contact.  This took Han out of the competition and Angelo Negro of Italy seized the chance to race ahead and came in third.  Despite not winning, Prette still tops the Standings.

It was a straight forward race in the Trofeo Pirelli AM class as the drivers kept their positions from pole to finish.  Ziad Ghandour from Lebanon once again took the win followed by Ken Seto of Japan and Yanbin Xing of China rounding off the podium.  Seto’s 2nd position is sufficient to propel him to the top of the table standings.

There was no stopping Eric Zang of China in the Coppa Shell class as he held off his challengers and raced ahead in his class.  Makoto Fujiwara of Japan switched positions with Charles Chan of Hong Kong today where Fujiwara managed to hold off Chan to come in second.  Zang’s double win over the weekend was not sufficient for him to topple the leader of the standings, Fujiwara, in his class.  David Dicker of New Zealand was the winner of the Gentlemen Cup while Kanthicha Chimsiri from Thailand took the Ladies’ Cup.

Pirelli 458. After yesterday’s penalty which cost him his podium win, Martin Berry of Australia was determined to take the win in Race 2.  He started at the back of his class but managed to race through the pack and succeeded with his first win in Singapore.  Sam Lok of Hong Kong took the second position while Sky Chen of China took third.  Berry was already crowned the winner of the 2017 APAC class champion coming into the Singapore Weekend.

Now for Finali Mondiali. The Ferrari Challenge APAC will be back on track from 28 – 29 October for the final round of the season. It will take place at Mugello, where the winners of the different classes Trofeo Pirelli, Pirelli AM, Coppa Shell and 458 Pirelli of this series will also compete with the Europeans and Americans for the world champion titles.  It will also serve as a traditional end-of-season celebration for all drivers. 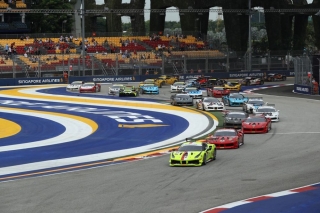 Singapore, 16 September 2017 – The 2017 Ferrari Challenge Asia-Pacific sixth round Race-1 opened the weekend in support of the Formula 1 Singapore Grand Prix. 29 drivers took to the Marina Bay street circuit yesterday for their practice and qualifying sessions under very wet conditions. Fortunately, today’s weather was a great improvement under glorious and sunny skies.

Trofeo Pirelli. It was a rolling start for all the cars on the grid. The race saw lots of action on the very challenging track. Ringo Chong of Singapore did his home fans proud by starting in pole position and leading all the way until the safety car was activated to leave time to the marshalls to extricate the car of Kent Chen of Chinese Taipei after he lost control and hit the wall. The 488 Challenge proved to be very resistant as Chen could walk out safely. The safety car stayed on track for 4 laps and eventually the race restarted with 7 minutes left to go. Chong managed to keep his leadership at the restart while Huilin Han of China launched a massive challenge against Zen Low of Malaysia during the last minutes of the race but found it impossible to overtake him. He came in third while Low took second position.

Trofeo Pirelli AM. Ziad Ghandour from Lebanon took class pole in his first-ever Challenge race in Singapore, followed closely by Yanbin Xing of China and Ken Seto of Japan. The top four positions were incredibly tight in qualifying. In the race, Ghandour maintained his advantage, taking class victory with Seto overtaking Xing for second place.

Coppa Shell. Eric Zang of China triumphed in the Coppa Shell class after starting fastest from pole and managed to hold off Charles Chan of Hong Kong. Zang crossed the line first ahead of Chan, while Makoto Fujiwara of Japan was placed third. Hideo Honda of Japan was the winner of the Gentlemen Cup while Kanthicha Chimsiri from Thailand took the Ladies’ Cup.

Pirelli 458. Martin Berry of Australia took class pole in his first Challenge race in Singapore in his 458 Challenge EVO car and was leading his class from start to finish. Unfortunately, a 25-second penalty was imposed on him due to an overtaking infringement which cost him his podium win. The win eventually went to Tamotsu Kondo of Japan, followed closely by Sam Lok of Hong Kong and Min Xiao of China.