Ferrari Challenge Europe – Trofeo Pirelli: “Babalus” and Segler out in front in run-up to Mugello 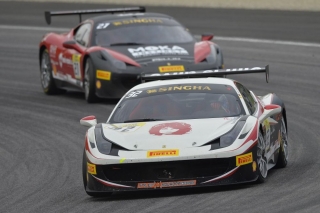 Scarperia, 8 May – The second round of the Ferrari Challenge Europe Trofeo Pirelli gets underway tomorrow , featuring diametrically different scenarios in the Pro and Am categories. In the Pro category, the star performer at the Monza weekend was “Babalus” who delivered a fantastic double victory thanks to superb driving and a little bit of good luck, sending him sprinting well out in front of the rest of the field. The Autoropa driver now looks down from his towering 44 points to the 19 of his nearest rivals David Gostner (Ineco-MP Racing) and John Farano (Rossocorsa), though the latter won’t be racing this weekend. Virtual third place is thus in the hands of Dario Caso (Rossocorsa-Pellin Racing), who finished second in Race 2 after being forced to retire on the Saturday.

Three drivers within six points.The scenario could not be more different in the Trofeo Pirelli Am, where the top three drivers are clustered together within six points. Leading the group is German Andreas Selger (StileF Squadra Corse), author of a second and a third place at Monza. Just two points behind him is Alessandro Vezzoni (Rossocorsa-Pellin Racing) who, after incurring a penalty in Race 1, took an authoritative victory in Race 2 on the Sunday. In third position is Swede Martin Nelson on 24 points like Swiss driver Nicolas Sturzinger who will, however, be skipping Mugello. In fifth position is the winner of the first race of the season, Tommaso Rocca, on 22 points.

Blistering performance. The 458 Challenge EVOs, which are used in all the Ferrari Challenge series, will be battling it out hard on the fantastic Prancing Horse-owned circuit this weekend. In the Pro class, it’ll be intriguing to see if anyone is capable of opening up the Championship again and blocking Babalus’s initial winning streak. In the Am class, it’ll be interesting to see which driver is first to make a clear impression on the championships standings. The schedule for the weekend’s racing, which is being broadcast live on Sky Sport 3, is as follows: Saturday, 12.30 CET Race 1 Trofeo Pirelli; 15.15 Race 1 Coppa Shell; Sunday 12.30 Race 2 Trofeo Pirelli; 15.15 Race 2 Coppa Shell. 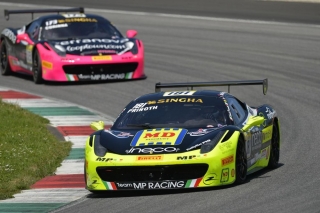 Scarperia, 7 May – After delivering two thrilling races at Monza, the Ferrari Challenge Europe returns this weekend at the Prancing Horse-owned Mugello Circuit. After a round one, one of the most expert drivers in the Coppa Shell has already begun pulling ahead of the field. We’re referring, of course, to Erich Prinoth of Ineco-MP Racing who just missed out on a double victory at Monza, finishing second in Race 1 and winning Race 2 at the end of a spectacular performance. His nearest rival is Belgian Kessel Racing driver Jacques Duyver eight points behind while in third is the most consistent of the drivers on the track, Gautam Singhania (Kessel Racing), who made it to the third step of the podium at Monza twice.

Coppa Gentlemen. Prinoth made it a clean sweep of the boards in Lombardy last weekend as his excellent performance also saw him top the standings in the Coppa Gentleman reserved for over-55 drivers. He has a very impressive 31-point lead in that over the Dutch 2014 winner Fons Scheltema and is 32 ahead of Thomas Gostner, who did well in Race 1 but was involved in a spectacular accident on Sunday in Monza.