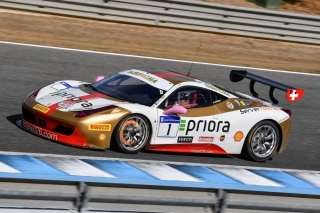 Trofeo Pirelli. At the start of Trofeo Pirelli Race-2 poleman Alex Palou (StileF Squadra Corse) showed he had learned Saturday’s lesson when he refused to be caught flat-footed by a burst of speed from Philipp Baron (Rossocorsa). The Spaniard entered turn 1 in first and stretched his lead with the fastest lap of 1:49:382. Title contenders Baron and Bjorn Grossmann (Octane 126) were locked in a wheel-to-wheel duel behind him. The Austrian fought tooth and nail to hold off the championship leader. The German, for his part, took no unnecessary risks because third place was enough to clinch the title. Nevertheless, near the end Grossmann was hard on the heels of Baron, who had tyre trouble. The Austrian overshot at the chicane going into the gravel but it made no sense for the now reconfirmed Ferrari Challenge Europe champion to gamble anything try to pass the rival. Palou won ahead of Baron and Grossmann. Marcello Puglisi (Rossocorsa) was fourth, with Alessandro Vezzoni (Rossocorsa Pellin-Racing) fifth.

Pirelli Am. Sam Smeeth pulled off yet another win in Trofeo Pirelli Am. The British Stratstone Ferrari driver earned his eighth victory right at the start, when he overtook pole sitter Vladimir Atoev (SMP Racing by Motor Service). The Russian spent the rest of the race trying to retake the lead but had to settle for 2nd. Third place was a straight role reversal of Saturday, with Martin Nelson (Scuderia Autoropa) holding off the attacks of John Farano (Rossocorsa) to the last.

Coppa Shell. In Coppa Shell, Thomas Loefflad (StileF Squadra Corse) held onto first place at the start, stretching his lead with some fast laps, the best of which in 1:53:385. Behind him Daniele Di Amato (CDP) secured second while Fons Scheltema (Kessel Racing), Claudio Schiavoni (Scuderia Niki) and Vladimir Hladik (Baron Service) put on quite a show in the fight for third. Hladik managed to overtake Schiavoni but there was nothing doing against Scheltema. Di Amato prevailed in the Gentlemen’s Cup while the Ladies Cup went once again to Corinna Gostner (Ineco MP-Racing), seventh overall. The next round is on the legendary Daytona International Speedway, where the Finali Mondiali Ferrari will takes place from 1 to 4 December. 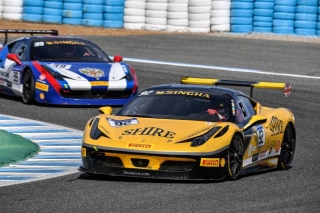 Trofeo Pirelli. Race-1 of the Trofeo Pirelli got underway shortly after 12:30 pm and Bjorn Grossmann immediately made his experience count. The German Octane 126 driver went into the first corner ahead of rookie Alex Palou (StileF Squadra Corse) and completed the first lap in an astonishing 1:49:934 that remained the fastest lap of the race. Having acquired a safety margin, the championship leader kept tabs on his rival and inched closer to a title that could be his as soon as Sunday after Race-2. Alessandro Vezzoni, Philipp Baron and Marcello Puglisi were involved in a big three-way fight for third. Vezzoni (Rossocorsa-Pellin-Racing) got off to a great start to take third place. Behind him the Rossocorsa drivers began a tough but fair fight won by Puglisi on lap 8. The Italian then put on quite a show as he set off in pursuit of Vezzoni. Twice Puglisi shoved the nose of his 458 Challenge EVO on the inside of his rival but Vezzoni was shrewd enough to let his opponent in and then to use the best trajectory to overtake him soon after. This was the first podium in the main class for Vezzoni, the reigning Pirelli Am champion.

Pirelli Am. Sam Smeeth notched up the seventh victory of his perfect season in the Trofeo Pirelli Am. The Stratstone Ferrari driver dominated while second place, the third in 3 races, went to Russia’s Vladimir Atoev (SMP Racing/Motor Service). The most thrilling duel was for third between Martin Nelson (Scuderia Autoropa) and John Farano. The Rossocorsa driver held off repeated attacks from the Swede to win his third podium of 2016.

Coppa Shell. The Coppa Shell was packed with twists and turns. At the start Eric Cheung (Motor Service) collided violently with the barriers and was lucky to escape unharmed. Fons Scheltema (Kessel Racing) led but at the end of lap 4 had to withdraw after blowing a tyre. The lead then passed to Erich Prinoth (Ineco MP-Racing) ahead of Claudio Schiavoni (Scuderia Niki) and Vladimir Hladik (Baron Service), who pulled off a sensational start. Corinna Gostner (Ineco MP-Racing) was also doing very well ahead of her father Thomas. Championship leader Thomas Loefflad (StileF Racing Team) put on a show after changing car and having to start at the back. He climbed as high as sixth but then plunged to 11th after a bump with Thomas Gostner, before finishing in ninth. Prinoth (who also won the Gentlemen Cup) won in front of Schiavoni and Hladik. Corinna Gostner came a fantastic fourth, winning the Ladies Cup, while Thomas suffered a problem on the last lap. Race-2 of the Trofeo Pirelli starts at 12:35 pm on Sunday, while the Coppa Shell race is at 3:30 pm. 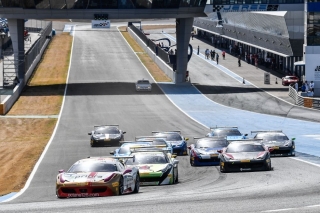 Jerez de la Frontera, 7 October 2016 – German is the dominant language of the Ferrari Challenge Europe Trofeo Pirelli which is back at the Jerez track this weekend, featuring the duel between Bjorn Grossmann (Octane 126) and Philipp Baron (Rossocorsa). On the other hand, the title has already been decided in Pirelli Am class, in which, however, a mighty struggle is on for the symbolic title of vice-champion behind Sam Smeeth (Stratstone Ferrari).

Trofeo Pirelli. Bjorn Grossmann seeks reconfirmation as champion in the class of the strongest drivers. The title could be assigned this weekend in Jerez, as the German driver of Octane 126 leads Baron by 41 points: he only needs to gain 5 points more than his rival over the weekend to secure the title, with one event still left in the calendar. The young drivers are also to be watched, starting with the other Octane 126 standard-bearer, Fabio Leimer, and with Alex Palou, a talented Spanish driver who this year is competing in GP3 and was recruited by the StileF Squadra Corse team for the Spanish race.

Pirelli Am. In Pirelli Am class, the title has already been decided, as Sam Smeeth overwhelmingly dominated the championship. However, behind him, three drivers are within an interval of just 21 points. They are Tommaso Rocca (Rossocorsa) with 87 points, Martin Nelson (Scuderia Autoropa) with 71, and John Farano (Rossocorsa) with 66. Hotly contested duels are assured during the race, as the video of the latest race held in Hockenheim testifies. The races are scheduled for Saturday and Sunday at 12:35 p.m.  (Trofeo Pirelli) and t 3:20 p.m. (Coppa Shell). 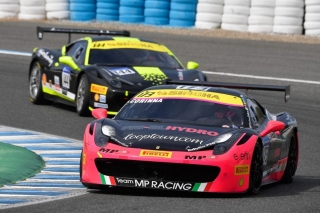 Jerez de la Frontera, 5 October 2016 – The engines of the Ferrari Challenge Europe will rev up again this weekend and take to the track in Jerez de la Frontera for the season’s second last event. The field is wide open in all three Coppa Shell competitions: overall title, Coppa Gentlemen, and Ladies Cup.

Kessel Racing duo. Despite a disappointing weekend in Hockenheim, Thomas Loefflad leads the standings for the overall title with 149 points earned with four wins and three podium finishes. Two Kessel Racing standard-bearers are chasing the StileF Squadra Corse driver: Rick Lovat, who dominated in Hockenheim, is 31 behind the championship leader, while Fons Scheltema, just back from the Barcelona race of the GT Sports Club, follows 46 points behind the leader. Loefflad’s objective is to increase the lead on his immediate pursuer to 45 points; this way he will be able to go to Daytona to seek of the world title, with the certainty of winning the championship.

Coppa Gentlemen. In Coppa Gentlemen, the standings reserved for drivers over 55, the competition is even tighter and takes place among the drivers of Kessel Racing. Lovat and Sheltema are separated by 15 points and a third intruder follows 30 points behind the leader: Erich Prinoth, who this year has won a race at the Mugello on the car of the Ineco-MP Racing team.

Ladies Cup. The race is very close also in the Ladies Cup, in which two contenders share the lead: Manuela Gostner (Ineco-MP Racing) and Deborah Mayer (Scuderia Niki). The potential spoiler is just two points behind: Corinna Gostner (Ineco MP Service). While we wait to take to the track in Spain, we offer you a video of the highlights of the Hockenheim race.