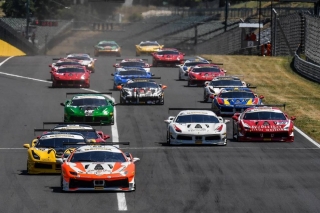 Budapest, 25 June 2017 – Daniele Di Amato, Chris Froggatt and Johnny Laursen won the second set of Ferrari Challenge races in the third round of the European series held over the weekend at the Hungaroring circuit in Budapest.

Trofeo Pirelli. The day again kicked off with the Trofeo Pirelli. Daniele Di Amato confirmed his great form by pulling away from the start after securing another pole position. Fabio Leimer (Octane 126) followed him in the 488 Challenge of CDP, while Sam Smeeth, Alessandro Vezzoni, Philipp Baron and Andrea Gagliardini were involved in a great battle for third. At midrace Alessandro Vezzoni (Rossocorsa-Pellin Racing) pulled off a brilliant attack on Sam Smeeth at the end of the main straight, taking third position and leaving the British Stratstone Ferrari driver and the Austrian from Rossocorsa to fight it out for fourth. This victory consolidated Di Amato’s lead in the standings ahead of Leimer.

Pirelli Am. In the Pirelli Am class Martin Nelson had another tricky day on the Budapest circuit. Scuderia Autoropa’s championship leader went into a spin at the fifth corner and had to resume from last. Chris Froggatt (HR Owen) then found himself in the lead followed by Canada’s Josh Cartu, driving for Ferrari Budapest. However, Cartu had to let go of any idea of winning because he was under pressure from Jens Liebhauser (Gohm Motorsport) who after a difficult start pulled off a great recovery. The Race-1 winner overtook Cartu on the last lap to maintain his record of a podium finish in every race this season. This was Froggatt’s first victory in the Ferrari Challenge.

Coppa Shell. Johnny Laursen (Formula Racing) triumphed in the Coppa Shell after starting fastest from pole and managing to hold off Thomas Gostner (Ineco-MP Racing). Fons Scheltema and Erich Prinoth came into contact on the second corner with the Kessel Racing man keeping ahead of his Ineco-MP Racing rival. A little later, Manuela Gostner went into a spin after bumping with Vladimir Hladik (Baron Service) and was forced to retire. Laursen crossed the line first ahead of Gostner, who secured a first career podium along with victory in the Gentlemen’s Cup, while Prinoth was placed third after passing Scheltema in the final laps. The Ladies’ Cup went to Tina Kok (Formula Racing). 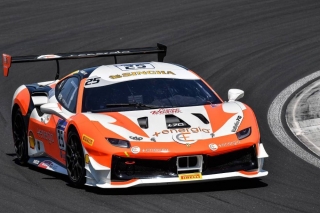 Budapest, 24 June 2017 – Daniele Di Amato, Jens Liebhauser and Eric Cheung won the first two races of the Ferrari Challenge in Budapest, in a third round of the European series packed with spectacle and excitement.

Trofeo Pirelli. The day kicked off with the Trofeo Pirelli. Daniele Di Amato, dominant at Monza with the 488 Challenge of CDP, was fastest off the mark from pole, immediately outpacing the rest. Alessandro Vezzoni, Fabio Leimer, Philipp Baron and Andrea Gagliardini put on a show behind him. Vezzoni (Rossocorsa-Pellin Racing) initially managed to hold onto third but soon had a fight on his hands with Leimer (Octane 126) who started to press hard. A little further back it was the same story for Baron, unusually in trouble with the 488 Challenge of Rossocorsa, and his challenger Gagliardini (CDP). At midpoint, Leimer passed Vezzoni with a wonderful piece of overtaking and then was hot on the tail of Sam Smeeth (Stratstone Ferrari). Gagliardini also managed to pass Baron but did so by cutting the chicane midway and so was forced to yield the position. The deck was shuffled yet again the final part of the race. Di Amato drove undisturbed but Leimer went into a spin while trying to overtake Smeeth and ended up behind Vezzoni once more. Di Amato and Smeeth crossed the finish line unchallenged, while at the final corner four cars were in the mix for third place, with Vezzoni winning out over Leimer, Baron and Gagliardini. Di Amato is the new championship leader.

Pirelli Am. The drama in the Pirelli Am class all took place in the early laps. At the start Chris Froggatt (HR Owen) collided with championship leader Martin Nelson, forcing the Scuderia Autoropa driver to retire. Jens Liebhauser was undisturbed in first, while Gerald Aubock (Gohm Motorsport), Christian Overgaard (Scuderia Autoropa), Tommaso Rocca (Rossocorsa) and Ferrari Budapest driver Josh Cartu battled it out for the podium. The latter knocked Rocca off the track on the second corner and received a drive-through penalty. Aubock and Overgaard carried on the fight, with the Danish driver eventually beating the Austrian to secure his first podium with the 488 Challenge to add to the others he has won with the F430. Liebhauser carried off the first winner’s laurels that had just escaped his grasp at Monza when the German Gohm Motorsport driver had run out of fuel on the final straight. Nelson still tops the standings despite today’s retirement.

Coppa Shell. The second race of the day, the Coppa Shell, kicked off in the afternoon with Erich Prinoth (Ineco-MP Racing) who clocked the best time in qualifying, but was relegated to the sixth row due to a penalty picked up in the previous round at Monza. The actual poleman Johnny Laursen (Formula Racing) was immediately overtaken by teammate Eric Cheung with a brilliant manoeuvre on the outside at the first corner. At midrace, Eric Prinoth and Fons Scheltema (Kessel Racing) came into contact, with the latter forced to retire. It was a great race for Manuela Gostner (Ineco-MP Racing), seventh in the overall standings and winner of the Ladies’ Cup. Cheung managed to keep Laursen at bay to the end for the overall win along with victory in the Gentlemen’s Cup. He was the fifth different winner in five races of this season’s Coppa Shell. Rick Lovat (Kessel Racing) finished third, ahead of Thomas Gostner (Ineco-MP Racing). The programme repeats itself on Sunday with the Coppa Shell at 12:50 pm and the Trofeo Pirelli at 3:35 pm.

Ferrari Challenge – Championship back on track in Hungary 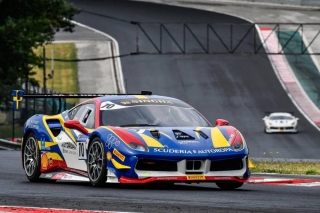 Maygorod, 23 June 2017 – With two races at the Hungaroring track on the outskirts of Budapest, the Ferrari Challenge Europe reaches the halfway mark ahead of a final round at the Paul Ricard before the summer break.

Trofeo Pirelli. Fabio Leimer, winner of Valencia Race-1, tops the Trofeo Pirelli standings. The Swiss, who drives for Octane 126, has a three-point lead over Philipp Baron (Rossocorsa), always in the podium places in the first four races. Daniele Di Amato (CDP), who dominated at Monza, lags 10 points behind the leader. Then after a weekend off, Bjorn Grossmann is back in the second 488 Challenge of Octane 126.

Pirelli Am. Martin Nelson (Scuderia Autoropa) has won all four races so far in the Trofeo Pirelli Am class and is 30 points ahead of Jens Liebhauser of Gohm Motorsport, finishing on the podium in every race so far this year. Tommaso Rocca (Rossocorsa), with two podiums at Monza, lies two points behind.

Coppa Shell. In the Coppa Shell, Johnny Laursen (Formula Racing), with a victory, a podium and two fourth places, has a 13-point advantage over Rick Lovat (Kessel Racing) and Eric Cheung (Formula Racing), two of the Challenge’s most experienced drivers. Lovat also leads the Gentlemen Cup for the over-55s. In the Ladies Cup, Manuela Gostner (Ineco-MP Racing) returns after Valencia with ground to make up on Fabienne Wohlwend (Octane 126), who took the lead with a fifth place at Monza.