Imola, 8 October 2017 – A page in the history of Ferrari Challenge was written at Imola, when for the first time a female driver left all her rivals behind to win a race in the Coppa Shell. Nineteen year-old Fabienne Wohlwend from Liechtenstein triumphed at the wheel of the 488 Challenge of Octane 126 team. The Trofeo Pirelli was also decided on the second day at Santerno, with Daniele Di Amato (CDP) taking the title with a round to go, while in the Trofeo Pirelli Am victory went to Jens Liebhauser (Formula Racing).

Coppa Shell. The Coppa Shell kicked off proceedings again on Sunday. This time Fabienne Wohlwend secured pole position at the wheel of the 488 Challenge of Octane 126 team and began writing her extraordinary tale. The girl from Liechtenstein was nearly three-tenths of a second ahead of Saturday’s winner, Henry Hassid, although clearly she still had it all to do in the race. At the start Hassid tried attacking her in the first two laps but she successfully fended him off. The group stretched out behind the top two with Johnny Laursen (Formula Racing) ahead of Fons Scheltema (Kessel Racing) and the Gostner family duo of Manuela and Thomas with the 488 Challenge of Ineco-MP Racing. Hassid let Wohlwend go for a while but then pulled closer launching another attack three laps from the end. However, Fabienne held him off again and in so doing wrote an amazing page in the history of motorsport and Ferrari. Johnnhy Laursen came third but still tops the championship standings with a healthy lead over the Frenchman.

Trofeo Pirelli. The Trofeo Pirelli title was decided in a rather extraordinary race. At the start everything pointed to Philipp Baron, in the 488 Challenge of Rossocorsa, making up points on Daniele Di Amato who had failed to start in the CDP team car. At the off poleman Bjorn Grossmann (Octane 126) kept his head but Baron immediately began pressing him in an attempt to make the most of the absence of his title rival. On the second lap Baron launched an attack and the pair went into the Tamburello chicane side-by-side with Baron coming out fractionally ahead. However, Grossmann kept his foot down and touched the rear of Baron’s 488 Challenge sending it into a spin. The Austrian driver collided with the barriers, ending his race there. At that very moment the CDP team mechanics managed to put Di Amato back on track and although he crossed the finish line three laps off the pace, he still sealed the European championship for the second time after his win in 2014. Grossmann was penalised for contact with Baron, dropping from first to third place. This left top spot to Sam Smeeth for his first Pro victory at the wheel of the 488 Challenge of Stratstone Ferrari, ahead of Alessandro Vezzoni for Rossocorsa-Pellin Racing team.

Pirelli Am. The Trofeo Pirelli Am saw a counterattack by championship leader Jens Liebhauser (Formula Racing) who dominated the day from qualifying. The race was fought at the highest level with Liebhauser pursued by the winner of Race-1, Martin Nelson (Scuderia Autoropa) who was in turn followed by the season’s other big star, Britain’s Chris Froggatt. Victory in the Trofeo Pirelli 458 again went to Galip Atar (Octane 126), increasingly dominant in the standings. The next round is in three weeks on Friday and Saturday October 27-28 with the Finali Mondiali at Mugello. 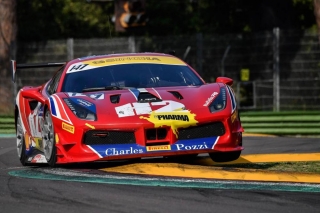 Imola, 7 October 2017 – Bjorn Grossmann, Martin Nelson and Henry Hassid won the first races of the sixth round of the Ferrari Challenge Europe at Imola. However, the women stole the show, with Fabienne Wohlwend on the podium and Manuela Gostner fourth at the wheel of their 488 Challenge in the Coppa Shell. Overtaking, duels and a some mistakes on a tricky track made for two spectacular races on the Santerno circuit.

Coppa Shell. The Coppa Shell kicked off the day on Saturday, with Henry Hassid starting best from pole position. However, the French driver didn’t manage to pull away, finding himself just a few tenths of a second in front of championship leader Johnny Laursen (Formula Racing), the 19 year-old from Liechtenstein Fabienne Wohlwend (Octane 126) and the pairing of Manuela and Thomas Gostner (Ineco MP-Racing). At around midrace Laursen, who had only made the race thanks to the excellent work of Formula Racing after a crash in the final minutes of qualifying, began to come under pressure from Wohlwend who kept tabs on the Dane for three or four laps before launching an attack at the Rivazza. The championship leader managed to defend from the first assault but on the following lap the 19 year-old did brilliantly to force her rival into a mistake at the Tamburello chicane allowing her to slip into second place. However, the entrance of the Safety Car, called on track after an accident involving Tadakazu Kojima (Formula Racing), frustrated her desire to cause problems for Hassid. The Safety Car returned to the pitlane just before the last lap after which the positions remained the same. This was Hassid’s sixth victory in seven races (he also won the Gentlemen Cup) and a first podium in the Ferrari Challenge for Fabienne Wohlwend who finished ahead of Laursen, who still tops the championship standings 28 points ahead of Hassid. Manuela and Thomas Gostner finished fourth and fifth.

Trofeo Pirelli. It was a chaotic start for the Trofeo Pirelli. Philipp Baron jumped the grren light and found himself at the Tamburello corner level with the top two in the standings, poleman Bjorn Grossmann (Octane 126), and championship leader Daniele Di Amato (CDP). Grossmann went in first followed by Baron, while Alessandro Vezzoni (Rossocorsa Pellin-Racing) collided with Di Amato who had needed to leave space for the Austrian of Rossocorsa. The CDP driver did a complete spin after which he managed to restart but from the back of the group. Vezzoni came off worse after being hit by Ettore Contini (Kessel Racing) and was forced to retire. On the second lap the race officials penalised Baron with a drive-through penalty for the jump start and so the Austrian finished behind Di Amato. It was an almost easy victory for Grossmann, ahead of Sam Smeeth (Stratstone Ferrari) and Di Amato, who had fought back to gain two points on Baron, his closest rival.

Pirelli Am. Martin Nelson reigned supreme in the Trofeo Pirelli Am after two unlucky race weekends. The Scuderia Autoropa driver dominated from start to finish, forcing opponents into one mistake after another to try to keep his pace. Bonamy Grimes, in the 488 Challenge of Stratstone Ferrari, was the first to make a mistake, then it was the turn of Tommaso Rocca (Rossocorsa) and finally, at the Variante Alta, Marc Brough (Graypaul Nottingham). All this gifted second position to none other than Chris Froggatt (HR Owen), who had started from last due to a crash in qualifying. However, Brough still managed to salvage a spot on the podium with third place, his first in the Ferrari Challenge. Nelson and Froggatt thus reopened the race for the title with Jens Liebhauser having a very unlucky race. Starting from pole, he was caught up in an accident at the start involving Pro class drivers and ended up losing his rear spoiler. The German had to make a pitstop to remove it entirely and thus finished only ninth. In the Trofeo Pirelli 458 victory went to Galip Atar (Octane 126). It will be the same again on Sunday with the Coppa Shell at 12:50 pm and the Trofeo Pirelli at 3:35 pm. 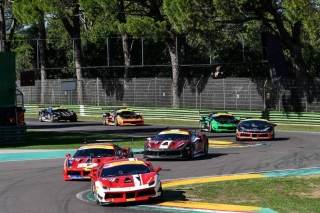 Maranello, 4 October 2017 – Imola will be the venue next weekend for one of the most important events of the Ferrari Challenge Europe season. Indeed a number of titles may be decided there with one round still to go. Over forty 488 Challenges are expected at the Enzo e Dino Ferrari circuit, which together with the 458 Challenge EVOs, will offer a truly unforgettable spectacle.

Trofeo Pirelli. The Trofeo Pirelli, currently led by Daniele Di Amato of CDP, is one of the championships that may be decided over the weekend. The young Italian is 43 points out in front and if he leaves Imola having gained three more points on his main rival, Austria’s Philipp Baron, would seal a second career win in the 25 year-old championship. However, the Rossocorsa team driver isn’t taking anything for granted as he showed in his victory in the last race at Silverstone. Sam Smeeth (Stratstone Ferrari) and Alessandro Vezzoni (Rossocorsa Pellin-Racing) are locked in a battle for third, separated by just two points.

Pirelli Am. The Trofeo Pirelli Am certainly won’t be decided at Imola. Germany’s Jens Liebhauser, of Formula Racing, has a 16-point lead over the big star of the Silverstone weekend, Chris Froggatt (HR Owen). Sweden’s Martin Nelson of Autoropa Scuderia is third and a bit further back but it would be foolish to rule him out. He dominated the first part of the season and if he were to regain the form of the first two rounds could yet turn the tables.

Coppa Shell. The Coppa Shell battle has also unexpectedly reopened. Indeed, it seemed that Denmark’s Johnny Laursen, who drives for Formula Racing, the team with which he also won the 2015 European Le Mans Series behind the wheel of a 458 Italia, was on his way to the title. However, France’s Henry Hassid did the double at Silverstone and, with his rival’s withdrawal in Race-2, is now 36 points off top spot. There is a big scrap for third place, with Eric Cheung (Formula Racing), Christophe Hurni (Team Zenith Sion-Lausanne) and Fons Scheltema (Kessel Racing) all within 10 points of each other.

Women. The battle for the Ladies’ Cup is wide open. Besides current leader Manuela Gostner, and Tina Kok, Imola will also see the return of young Fabienne Wohlwend, Liechtenstein’s representative in the race with the 488 Challenge of Octane 126.

Programme. The Challenge weekend will kick off on Wednesday with a day of testing although the actual programme will open on Friday with tests and free practices. On Saturday and Sunday qualifying for Race-1 is scheduled for 9 am (Coppa Shell) and 11.30 am (Trofeo Pirelli) with the races scheduled for 12:50 pm and 3:35 pm.