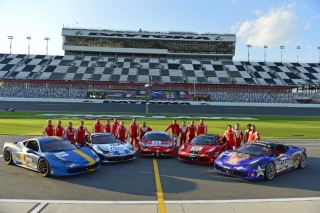 Maranello, 25 January – The Ferrari Challenge North America has chosen a very prestigious way of inaugurating its twentieth season, with a support race at the Daytona 24 Hours.

The famous endurance race takes place this weekend and the American track will provide the setting for the first round of the American Ferrari Challenge series, making for a truly exceptional opening event. Throughout the year, as usual, owners of the Marque will be able to try their hand at the wheel on some of the best known circuits in the world. Over twenty Ferraris will fight it out on the technically demanding Daytona International Speedway, ensuring a spectacular show.

The programme for the opening round gets underway today with a first leg at 11.45 and a second one tomorrow, Saturday 26 at 10.00, prior to the start of the 24 Hours which gets underway at 15.30.

The Ferrari Challenge North America makes its Daytona debut: Kauffmann, Farano and Anassis take the first wins of the season 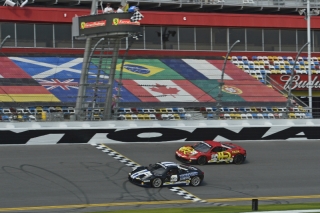 Maranello, 27 January – This weekend saw the start of the twentieth season for the Ferrari Challenge North America with a high calibre premier, with the Stars and Stripes version of the Ferrari one-make series acting as the curtain raiser to the Daytona 24 Hours at Florida’s International Speedway. Twenty two drivers took part in two races at the wheel of the 458 Challenge car. On Friday, Race 1 was actually won by a Coppa Shell driver, John Farano (Auto Gallery) who crossed the line ahead of team-mate Carlos Kauffmann, with the second placed Venezuelan taking the win in the Trofeo Pirelli category, followed home by Mark McKenzie (Ferrari of Houston) and Henrik Hedman (Ferrari of Fort Lauderdale,) third and fourth overall respectively. In the Coppa Shell the runner-up was Ryan Ockey entered by Ferrari of Ontario, while third step on the podium went to Brent Lawrence (Ferrari of San Diego).

In Race 2, the honours again went to Carlos Kauffmann, first overall and first in the Trofeo Pirelli, followed by Emmanuel Anassis (Ferrari of Quebec), best of the Coppa Shell runners ahead of Mark Mckenzie and Onofrio Triarsi (Ferrari of Central Florida) second and third respectively in the Trofeo Pirelli. Completing the Coppa Shell podium prior to the start of the 24 Hours were Brent Lawrence (Ferrari of San Diego) and Ryan Ockey.

Competitors in the America series will be back in action on 13-14 April at Sao Paolo for another truly unique event as part of the second Ferrari Racing Days of the year, which follows on from the opening one in Abu Dhabi at the beginning of March. Also on track will be the amazing cars entered in the non competitive XX and F1 Clienti programmes.