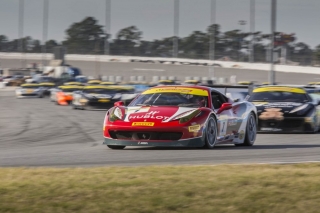 Daytona Beach, 30 January 2016 – The drivers truly proved their talents and strategy in the second race of the weekend at Daytona International Speedway. From brilliant sportsmanship, strong competition and true excellence in racing, the 35-minute race was a delight for all the spectators in the colored grandstands and infield of the newly renovated circuit facility.

Trofeo Pirelli. Results from yesterday’s qualifications would determine the 36-driver starting grid. Ricardo Perez (Ferrari of Houston), who was the polesitter in Race 2, led the race for all 17 laps and marked the fastest lap at 1:49:128. But he wasn’t alone. A fierce battle for the top five positions in the Trofeo Pirelli class continued behind him between Emmanuel Anassis (Ferrari Quebec), Gregory Romanelli (The Collection), Martin Fuentes (Ferrari of Beverly Hills), and Carlos Kauffman (Ferrari of Ft. Lauderdale). It went three wide at the start of the race in Turn 1 between Fuentes, Anassis and Romanelli, bringing the Ferraristi to their feet. Although all passed smoothly, Fuentes lost his second place position to Anassis within Lap 2. From there on out, the drivers battled one another for a podium finish. Behind Perez, Anassis finished in second place and Fuentes in third.

Trofeo Pirelli AM. James Weiland (Boardwalk Ferrari) had a successful early start, finding himself racing against the Trofeo Pirelli drivers for the first half of the race. However, yesterday’s winner, Steve Johnson (Ferrari Ft. Lauderdale) wouldn’t let him out of sight, edging Weiland to his limits. And on several attempts, Wei Lu (Ferrari of Vancouver) tried to sneak in on the attack for a top three finish but unfortunately entered Turn 1 from the straightaway with too much force, losing him a chance for the podium. Johnson would stand on top of the podium steps again, with Weiland on his left and Arthur Romanelli (The Collection) on his right.

Coppa Shell. Guest driver from the Ferrari Challenge European series, Rick Lovat (Ferrari of Ontario) found his success at Daytona today. Beginning in twentieth position, Lovat elevated his standing to twelfth overall and first in his class. And returning from tight competition at last year’s Finali Mondiali in Mugello, Barry Zekelman (Ferrari of Ontario) maintained his ground against Chris Cagnazzi (Ferrari of Long Island) who continued at his tail. From the high speed push in the straightaway to the exit into the banking at Turn 6, both drivers seemed to compete in a race of their own. Both would finish strong in second (Zekelman) and third (Cagnazzi) in their Coppa Shell class.

The next round of the North American season finds itself in the heart of California Wine Country at Sonoma Raceway April 8-10. 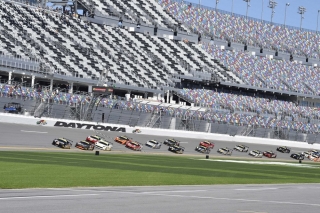 Daytona Beach, 29 January 2016 – After two days of driving under heavy rain and slick conditions, the deep azure Florida skies welcomed the drivers of the Ferrari Challenge to Daytona International Speedway for the first round of racing in the 2016 season. The 3.56-mile road course, recognized for its steep banks, saw much action in the first race of the weekend. Although many drivers proved their talent on track from high speeds to overtaking in the corners, the caution flag flew three times during the 30-minute race.

Trofeo Pirelli. The action during the day’s race remained at the front of the field among Emmanuel Anassis (Ferrari Quebec), Gregory Romanelli (The Collection), Ricardo Perez (Ferrari of Houston), and Martin Fuentes (Ferrari of Beverly Hills). With some of the fastest times marked, the seasoned drivers in the Trofeo Pirelli class were able to cleared out of Turn 1 went the race went green. However, veteran driver Carlos Kauffman (Ferrari of Ft. Lauderdale) was not so lucky, hitting the barrier at Turn 6 in the first lap. This caused the first full-course caution of the race. Romanelli clocked the fastest time with a lap of 1:49:875. Anassis finished at the top of the podium steps in first place, Romanelli in second, and Perez in third.

Trofeo Pirelli AM. Newcomers to the series found the greatest success today in the Trofeo Pirelli AM class. Steve Johnson (Ferrari of Ft. Lauderdale), who started third in his class at the start, battles his way thru the field to finish in first place. Newcomers Caesar Bacarella (Ferrari of Long Island) and Lance Willsey (Ferrari of Central Florida) had the greatest success of all. Both raced for their first time as Ferrari Challenge drivers, and although rookies in the series, stood second and third on the podium steps. Marc Muzzo (Ferrari of Ontario) nearly saw his chance for a win, but with correct alignment and quick adjustments, Bacarella and Willsey bypassed the traffic in the midfield.

Coppa Shell. Veteran driver Joe Courtney (Miller Motor Cars) was unstoppable today. From his exits out of turns and the speeds clocked alongside the straightaways, his success followed him straight to first position in his class. His biggest contender remained with Jean-Claude Saada (Boardwalk Ferrari) throughout the race. Ultimately, Saada finished second and Rodney Randall (Miller Motor Cars) came in third. Race 2 will precede the 24 Hours at Daytona at 9:45 AM EST (3:45 PM GMT) with the classic endurance going green 2:10 PM EST (8:10 PM GMT). 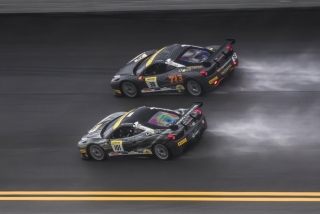 Daytona Beach, 28 January 2016 – Defined as one of the the world’s most renowned raceways, Daytona International Speedway retains quite a history within Ferrari’s racing endeavors. With 21 victories at this circuit, the Prancing Horse marque welcomes its return to the 3.56-mile road course for the 24 Hours and Ferrari Challenge season opener. This year, 37 drivers representing four different countries will take to the high banks in two races prior to the GT endurance race which features the new 488 GTE for the first time. Although the drivers ran three successful practice sessions under some slick conditions, the qualifying session this afternoon was cancelled due to inclement weather. Therefore, the starting grid positions reflect the 2015 final point standings.

Trofeo Pirelli. Making his return as the newly crowned 2015 North American Ferrari Challenge champion, Emmanuel Anassis (Ferrari Quebec) is looking forward to start his 6th season with the series driving the 458 Challenge EVO. Finishing with 254 points in 2015, Anassis saw his most successful year as a Challenge driver. However, he’ll find some fierce competition with the rest of the Trofeo Pirelli field. Gregory Romanelli (The Collection), who finished second in the North American championship, will follow behind Anassis in the starting grid for tomorrow’s race, alongside Wei Lu (Ferrari of Vancouver) and a few other additional familiar faces, including 2014 North American champion Ricardo Perez (Ferrari of Houston), Henrik Hedman (Ferrari of Ft. Lauderdale) and Carlos Kauffman (Ferrari of Ft. Lauderdale).

Trofeo Pirelli AM. James Weiland (Boardwalk Ferrari), Marc Muzzo (Ferrari of Ontario), Arthur Romanelli (The Collection), Patrice Brisebois (Ferrari Quebec), Steve Johnson (Ferrari of Ft. Lauderdale), and Brent Lawrence (Ferrari of Newport Beach) will make their return for another consecutive season in the Ferrari Challenge. However, they will test their potential this season against some new and returning drivers in Trofeo Pirelli AM.

Coppa Shell. Although the top contenders — Jean-Claude Saada (Boardwalk Ferrari, Joe Courtney (Miller Motor Cars), Chris Cagnazzi (Ferrari of Long Island), Dan O’Neal (Ferrari of Ft. Lauderdale) – will start in the the front of their class field in tomorrow’s race, the North American Ferrari Challenge sees its biggest field of newcomers in Coppa Shell. Ten rookies will race for the first time this weekend in the 458 Challenge EVO. These drivers have participated in several of Ferrari’s Corso Pilota programs, escalated their skill level to the top with the Challenge portion of the course. Testing in Daytona earlier this month, the newcomers had their first taste of the circuit’s elevated banks in Turns 1 and 4, as well as the high-speed straightaway.

The program. Follow all the action as Race 1 of the weekend goes green tomorrow at 12:00 PM EST (6:00 PM GMT). Saturday will feature Race 2 of the Ferrari Challenge at 9:45 AM EST (3:45 PM GMT) preceding the 24 Hours, which begins at 2:10 PM EST (8:10 PM GMT). Stay up to speed on Twitter and Instagram at @FerrariUSA and follow the conversation at #FerrariGTRacing.