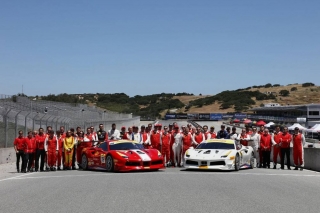 Monterey, 17 May 2017 – The Ferrari 488 Challenge made its second continental debut, racing in North America at Laguna Seca, one of the world’s most famous circuits. This followed its overall debut at Abu Dhabi in the Asia-Pacific championship.

Legendary corners. The California track was a perfect setting for the 488 Challenge, which on legendary corners such as the Corkscrew and the Andretti Hairpin showed off all the features that make it a revolutionary car for a single-make championship. The drivers at the wheel of the Ferrari turbo with its 650 hp V8 engine, winner the International Engine of the Year award, were thrilled to take full advantage of its power and extraordinary driving torque on the ups and downs of the Californian track.

Thirty-six cars. Thirty-six 488 Challenges raced at Laguna Seca in addition to the 18 in Asia. The car’s European debut will take place next weekend at Valencia’s Circuit Ricardo Tormo, which will feature 40 of the new cars. Over 100 488 Challenges are now in action if we also consider the ones used in the Corso Pilota activities. 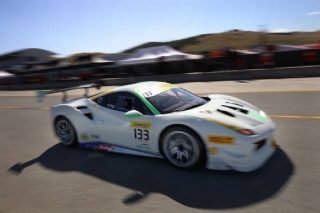 Laguna Seca Raceway, Salinas, CA – May 15, 2017 – Known across the globe for starring roles in films including “Alien: Covenant,” “Steve Jobs,” “Twelve Years a Slave” and  “Assassins’ Creed,” actor Michael Fassbender has stepped into the real-time role of racecar driver as he successfully completed the first round of the 2017 North American Ferrari Challenge racing series.  A lifelong fan of Ferrari and Formula 1, Fassbender began his training with Ferrari’s “Corso Pilota” driving program last year.

“Ferrari is defined by racing, and training with the Ferrari team gave me a great foundation to hone my skills behind the wheel of the 488 Challenge race car,” says Fassbender. “From a very early age I idolized Ferrari and its champion, Michael Schumacher, in particular, so now racing in the Ferrari Challenge brings that dream full circle,” he continues.

A single-model championship series developed by Ferrari for clients who have a passion for racing, the Ferrari Challenge Trofeo Pirelli has thrilled drivers and fans alike since its inception in 1992. The Challenge is run in three divisions– Europe, Asia, and North America – and is an ideal platform for drivers who have a passion for racing. Fassbender will compete in the North American Ferrari Challenge series.

Monterey, 14 May 2017 – Skies remained clear and crowds flocked to see the all-new 488 Challenge race car turn its first racing laps at Laguna Seca. Within that crystal clear day, however, was true competition at every level and in every class.

Trofeo Pirelli/Trofeo Pirelli 458 EVO. The first race of the day featured both the Trofeo Pirelli class in 488 Challenge cars and the Trofeo Pirelli 458 EVO category. Drivers saw over 140mph cresting Turn 1, before applying maximum braking to slow down in time for the tight Andretti hairpin. Peter Ludwig (Wide World of Cars) was the class of the field and despite two caution periods, was able to manage and maintain his lead throughout the race. Ludwig is a rookie in Ferrari Challenge but is an experienced GT driver. Martin Fuentes gave valiant chase, but ended up second ahead of Cooper McNeil, his teammate at Scuderia Corsa-Ferrari of Silicon Valley. In the Trofeo Pirelli 458 EVO class, Joseph Rubbo (Ferrari of Long Island), back in the series after an appearance at Lime Rock in 2013, took charge of the race right from the off. He was followed home by rookies Naveen Rao (Ferrari of San Diego) and John Boyd (Ferrari of Denver). In the competition for the Ladies Cup between Lisa Clark (Scuderia Corsa-Ferrari of Beverly Hills) and Debra Palermo (Ferrari of San Francisco), Lisa edged out Debra after close competition throughout the race.

Trofeo Pirelli AM/Coppa Shell. Race two of the day ran virtually incident free, with just a single caution on lap 7. There was an intense battle at the front throughout the race, a battle that was eventually won by rookie Brent Holden (Ferrari of Newport Beach), holding off former Coppa Shell champion Jean-Claude Saada (Boardwalk Ferrari) for the win. Ferrari of Ontario’s Marc Muzzo, our pole sitter, came in third position. In Coppa Shell, Barry Zekelman (Ferrari of Ontario) and Osvaldo Gaio held a comfortable lead over the rest of the Coppa Shell class. It was an impressive performance by Gaio to finish on the podium in his first ever Challenge race. The Miller Motorcars driver also won the Gentlemen Cup class. Third on the Coppa Shell podium was another rookie: Murray Rothlander of Ferrari of Vancouver.

Next stop Canada. The next North American round of the Ferrari Challenge will be held at Montreal in conjunction with the Grand Prix du Canada on June 11.

Monterey, 14 May 2017 – A blustery, chilly morning gave way to sunshine and mostly blue skies in Northern California for Race 2 of the first round of Ferrari Challenge Trofeo Pirelli North America. Drivers had clearly acclimatized to their new 488 Challenge cars as times tumbled compared to Race-1 on Saturday.

Trofeo Pirelli AM. In Trofeo Pirelli AM Marc Muzzo of Ferrari of Ontario made good on his pole position to take the checkered flag on Sunday in the first race of the day. A clean, but contested start provided plenty of drama as the field of 488 Challenge cars streamed through the fast Turn 1 and into the heavy braking for the Andretti Hairpin. Just behind Marc, Chris Cagnazzi of Ferrari of Long Island applied heavy pressure to Jean-Claude Saada of Boardwalk Ferrari. Saada, however, had an answer and pumped in the fastest lap of the race thus far, a 1:29.2 on lap 7.

Coppa Shell. In Coppa Shell, Karl Williams took off from pole position in his Scuderia Corsa prepared 488 Challenge car and did not look back. A caution on lap 9 closed the field back together, but Karl had an answer, even as Barry Zekelman of Ferrari of Ontario began to close the gap towards the end of the race. Rookie Robert Picerne was able to capture the Gentleman’s Trophy.

Trofeo Pirelli. High drama struck the Trofeo Pirelli class in their second race of the weekend when pole-sitter Cooper MacNeil of Ferrari of Silicon Valley and second place driver Wei Lu (Ferrari of Vancouver) touched and spun in the middle of the Andretti Hairpin. Drivers dodged to either side of the two cars as they faced the wrong direction and were forced to wait for the field to pass. Wei was able to continue in his Ferrari of Vancouver prepared 488 Challenge car in 21st position, but Cooper was out. Out of the chaos, Enzo Potolicchio, Peter Ludwig and Ricardo Perez emerged in first, second and third respectively in the Trofeo Pirelli class.

Trofeo Pirelli 458 EVO. Fortunately, the incident did not cause too much chaos in the Trofeo Pirelli 458 EVO class, which started behind the Trofeo Pirelli class. Joseph Rubbo maintained his qualifying advantage after Turn 1. John Boyd of Ferrari of Denver and Naveen Rao of Ferrari of San Diego enjoyed an intense battle in the first few laps for second position. However, heartbreak soon followed for Naveen who pulled to the side of the track on lap 5 and triggered a full course caution period. This, however, played right into the hands of Wei Lu who had overtaken most of the 458 EVO class by then and used the caution to close up to the back of the Trofeo Pirelli 488 class competitors.

Final laps. Peter Ludwig survived sustained pressure from Ricardo Perez to take the victory after a late time penalty was applied to Enzo Potolicchio and fell to ninth position, moving Martin Fuentes onto the podium. In the Trofeo Pirelli 458 EVO class, Rubbo built and maintained a strong gap and stayed out of the intense battle for second between Trevor Baek and Oscar Paredes-Arroyo with James Walker close behind. A last lap collision brought out caution flags, but not before James had sneaked past Oscar for the final position on the podium. Lisa Clark of Ferrari of Beverly Hills took the Ladies Cup after another close-fought race with Debra Palermo. The next North American round of the Ferrari Challenge will take place on June 11th in Montreal where Challenge will support the Canadian Grand Prix at Circuit Gilles Villeneuve. 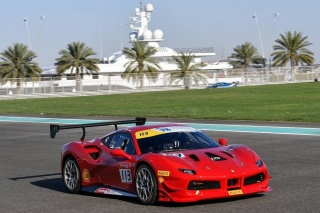 A History of Success. This year marks the 25th anniversary since the Ferrari Challenge series was announced in 1992. Since then, hundreds of drivers have competed at some of the most historic race circuits around the world. 488 Challenge is the seventh car used in the one-make series that started with the 348 TB/TS used between 1993 and 1996. Since then, Ferrari has turned each of its mid-engine V8 sports cars into Challenge competition cars, a tradition that continues with 488 GTB and 488 Challenge

488 Challenge Makes its Debut in North America. 488 Challenge marks a new evolution in Challenge competition cars, and the biggest step in performance to date. This new race car is powered by the same twin-turbocharged V8 motor that won the 2016 overall International Engine of the Year award and is used in 488 GTB and 488 Spider. In 488 Challenge, this 3.9-liter V8 produces 670cv. Side Slip control also makes its first appearance in Challenge competition, allowing drivers to better manage the car’s significant performance potential.

The series. In 2017, drivers will compete across 6 circuits in North America before returning to the Mugello circuit to compete in the Finali Mondiali in October. Competitors are grouped into 4 classes, Trofeo Pirelli, Trofeo Pirelli AM, Coppa Shell and 458 EVO cars (for older 458 Challenge EVO chassis).

Schedule. Practice will take place on Friday starting at 9:00am with qualifying slated for Saturday at 11:20. The first races of the 488 Challenge era will begin at 2:40pm on Saturday with additional qualifying and race action on Sunday starting at 10:45am and 2:05pm respectively.