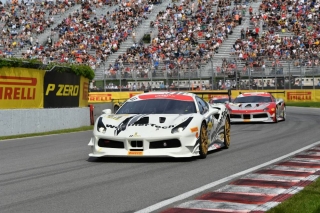 Montreal, Quebec | 09 June 2019 – Run under perfect conditions, Ferrari Challenge put on quite a show with an immense amount of action throughout the thirty car field.  Picture perfect weather conditions that have been sustained throughout the Grand Prix weekend persisted to ensure that drivers were able to enjoy the Circuit Gilles Villeneuve in ideal circumstances.

Trofeo Pirelli. Cooper MacNeil (Scuderia Corsa, Ferrari of Westlake) led home Benjamin Hites (The Collection) in race 2, ultimately finishing four and a half seconds ahead of the young driver.  The start proved decisive at the front of the Trofeo Pirelli category as Cooper was able to establish position going into turn 1 and then through the much slower turn 2.  Further back, drama amongst Marc Muzzo (Ferrari of Ontario) and James Weiland (Ferrari of San Francisco) ultimately resulted in Marc Muzzo claiming his first podium in 2019.  The Canadian driver crossed the line with just a second and a half to spare.

Trofeo Pirelli AM. Brent Holden (Ferrari of Newport Beach) took his first win of the season in the Trofeo Pirelli AM category, crossing the line ten seconds ahead of his nearest competitor, Dave Musial (Ferrari of Lake Forest).  Neil Gehani leveraged a back up car to take the grid after his incident in race 1, and used it to good affect, earning another podium, this time by only eight tenths of a second over Jose Valera (Ferrari Ft. Lauderdale).

Coppa Shell. Drama at the start took pole sitter Mark Issa (Ferrari of Atlanta) out at the very start after he was a bit overenthusiastic.  Mark’s adventure also cost Ziad Ghandour (Boardwalk Ferrari) who was eliminated from competition in the Trofeo Pirelli class.  That left the door open for Claude Senhoreti (Ferrari of Ft. Lauderdale) to return to the podium, but this time in the first place position.  Claude also demonstrated excellent pace of his own, finishing in fifth overall, and nearly twenty seconds ahead of his nearest competitor in the Coppa Shell category, Dale Katechis (Miller Motorcars).  Oscar Paredes Arroyo (Ferrari of Ft Lauderdale) completed the Coppa Shell podium.

Coppa Shell AM. Jay Schreibman (Cauley Ferrari) took the win in race 2, beating out Brad Horstmann (Foreign Cars Italia) and Gianni Grilli (Ferrari of Quebec) who rounded out the top three.  The Coppa Shell AM category ultimately ended up quite  strung out as Jay was able to fight amongst the Trofeo Pirelli Am category while Brad Horstmann was sandwiched by two drivers from Coppa Shell.  Gianni Grilli also built quite a gap on Mark Davies (Wide World of Cars), who fell back to nearly ten seconds from Gianni by the time the checkered flag fell.

Schedule. Ferrari Challenge will return to the track on July 26, at the famed Indianapolis Motor Speedway. 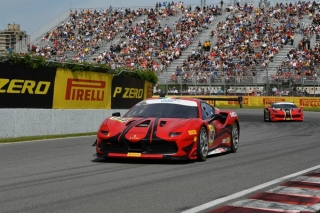 Montreal, 8 June 2019 – Ferrari Challenge competition in Montreal had hardly passed the ten minute mark when a significant incident that began with Lisa Clark (Scuderia Corsa, Ferrari of Beverly Hills) left oil on the racing surface and triggered a chain of consequences that took several strong cars out of contention.  An extensive safety car period was required, but despite the diligent efforts of the track safety workers, the series was unable to return to green-flag conditions.

Trofeo Pirelli. Cooper MacNeil (Scuderia Corsa, Ferrari of Westlake) again claimed victory at Montreal over James Weiland (Ferrari of San Francisco) and Benjamin Hites (The Collection).  Cooper had begun to stretch a gap before the race was neutralized behind the safety car.  Further back, Thomas Tippl (Scuderia Corsa, Ferrari of Beverly Hills) had a tough go of it, falling back several places in the first lap, first corner melee.  Marc Muzzo (Ferrari of Quebec) was one of the beneficiaries and the Canadian driver showed strong pace, before his progress was blunted by the safety car.

Trofeo Pirelli AM. Ziad Ghandour (Boardwalk Ferrari) took the win after Barry Zekelman (Ferrari of Ontario) and Neil Gehani (Continental Autosports) were caught up in the turn 13 mess instigated (by no fault of her own) by Lisa Clark’s mechanical difficulties.  This allowed Ziad to inherit the win, beating out Dave Musial (Ferrari of Lake Forest) and Jose Valera (Ferrari of Ft. Lauderdale) who rounded out the podium.

Coppa Shell. Mark Issa (Ferrari of Atlanta) took another win, beating out Claude Senhoreti (Ferrari of Ft. Lauderdale).  Claude was able to eek by Brian Davis (Ferrari of Palm Beach) in the first lap chaos before the safety car put an end to competitive racing action.

Coppa Shell AM. Eric Marston (Scuderia Corsa, Ferrari of Westlake) had a strong race, and strong race pace to both get past Jay Schreibman (Cauley Ferrari) and to keep the rest of a highly competitive Coppa Shell AM category behind him.  Eric, Brad Horstmann (Foreign Cars Italia) and Gianni Grilli (Ferrari of Quebec) all made it past Jay Schreibman who encountered first the opening lap chaos and lost out the most among his fellow drivers.

Schedule. Ferrari Challenge will return to the circuit on Sunday immediately before the start of Formula 1 pre-race festivities at 11:15am (all times in ET). 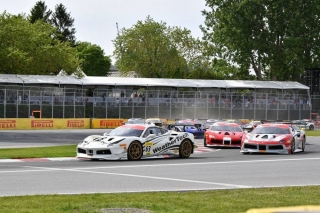 Montréal, 08 June 2019 – The North American circuit of Ferrari Challenge Trofeo Pirelli continued its 2019 season with the most anticipated stop of the year, at the Grand Prix du Canada.  Running in support of the Scuderia, thirty three Ferrari Challenge pilots negotiated the tight confines and unforgiving barriers of the Circuit Gilles Villeneuve, located minutes from downtown Montreal.  Due to the tight timelines required for the weekend, Ferrari Challenge merged its two qualifying sessions into one, with drivers’ fastest laps setting the grid for race 1 and their second fastest laps setting the grid for race 2.

Trofeo Pirelli. Cooper MacNeil (Scuderia Corsa, Ferrari of Westlake) took pole position for race 1 and race 2, setting fastest and second fastest lap.  For race 1, that meant starting ahead of Thomas Tippl (Ferrari of Beverly Hills) and James Weiland (Ferrari of San Francisco).  While Cooper was well clear with a fastest lap half of a second better than Thomas could manage, the battle for third through fifth was quite tight.  James Weiland finished only two tenths off and Benjamin Hites (The Collection) was just under two one-hundredths of a second off.  When it was time to set second fastest laps, Benjamin was able to close the gap to Cooper considerably, ending up just under three tenths of a second slower than the American driver.  James Weiland completed the top three, a further three tenths down and it was Thomas Tippl’s turn to just miss the top three, just four one-hundredths off of the pace of the top three.

Trofeo Pirelli AM. Barry Zekelman (Ferrari of Ontario) took pole position honors for race 1 at Montreal, beating out Neil Gehani (Continental Autosports and Brent Holden (Ferrari of Newport Beach).  The Canadian driver took pole for race 1 by nearly two tenths of a second based on his fastest lap time and he repeated the trick for his second fastest lap, setting another time good for pole position in race 2 as well.  Brent Holden jumped Neil Gehani for second, but only by less than one tenth of a second setting up a fascinating duel for the upcoming races.

Coppa Shell. Mark Issa (Ferrari of Atlanta) took pole position for both races in his Ferrari 488 Challenge car, beating out Brian Davis (Ferrari of Palm Beach) by just under two tenths of a second.  The two were in a class of their own within the Coppa Shell category, beating out third place runner Dale Katechis (Miller Motorcars) by almost a full second in their fastest laps, setting the grid for race 1.  Based on the group’s second fastest laps, however, Dale Katechis was able to reign in and overtake Brian Davis, earning the second spot for the Sunday finale.  The two were only one one-hundredth of a second apart, and were again well separated from the rest of the Coppa Shell category.

Coppa Shell AM. Jay Schreibman (Cauley Ferrari) claimed pole on the basis that his fastest lap was two tenths of a second clear from the best that Eric Marston (Scuderia Corsa, Ferrari of Westlake) could manage.  The two were a further three tenths up the road from the best that Bradley Horstmann (Foreign Cars Italia) could accomplish, and so he will start third in race 1.  Jay was also able to demonstrate his consistency, earning pole position for race 2 based on his second fastest lap in the session.  Brad Horstmann will start ahead of Eric Marston, where the margin between second and third was again split by the slimmest of margins, seven one-hundredths of a second.

Schedule. Ferrari Challenge will take to the track for race 1 at 3:30pm (all times in ET) and will return to the circuit for race 2 action on Sunday at 11:15am. 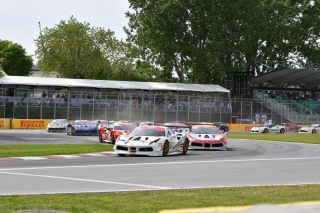 Trofeo Pirelli. Cooper MacNeil (Scuderia Corsa, Ferrari of Westlake) took the opportunity to solidify his standing over Benjamin Hites (The Collection) after a contentious weekend at WeatherTech Raceway Laguna Seca.  The two drivers collided in Race 2, immediately ending Benjamin’s race while Cooper was able to carry on and score more valuable points.  With eight races to go, the Chilean driver still has plenty of time to close the gap, but will be looking for strong performances at both races in Montreal.  Thomas Tippl (Scuderia Corsa, Ferrari of Beverly Hills) and Martin Burrowes (Ferrari of Ft Lauderdale) remain locked in a tight battle for third in Trofeo Pirelli after Martin took a surprise win in race 2 at Laguna Seca.

Trofeo Pirelli AM. Ziad Ghandour (Boardwalk Ferrari) continues to hold the points lead in the Trofeo Pirelli AM category despite a difficult weekend at Laguna Seca.  After his promotion from the Coppa Shell category by which he also keeps his points form the prior races, Danny Baker (Ferrari of Palm Beach) has vaulted to second in the category, however he too had a difficult weekend at Laguna and will be looking to reverse his fortunes in Montreal.  The winner of the Laguna weekend was certainly Neil Gehani (Continental AutoSports) who took a win and a second place finish, and is thus only 16 points behind Ziad and twenty points ahead of Barry Zekelman (Ferrari of Ontario).

Coppa Shell. Mark Issa (Ferrari of Atlanta) has established himself as the firm favorite in Coppa Shell after running off two wins at Laguna Seca.  His closest challenger, Brian Davis (Ferrari of Palm Beach) benefited from the same rules as Danny Baker, having moved up from Coppa Shell AM to the Coppa Shell category.  After four consecutive wins in Coppa Shell to open the season, Brian’s Laguna was far less kind, though he remains only eleven points behind Mark.  Dale Katechis (Miller Motorcars) has had impressive consistency, with two third place finishes in Laguna Seca to generate a 16 point lead over Claude Senhoreti (Ferrari of Ft. Lauderdale).

Coppa Shell AM. Lisa Clark (Scuderia Corsa, Ferrari of Beverly Hills) leads the Coppa Shell AM category, despite never winning a race thus far in 2019.  Her two third place finishes at Laguna and a second place finish at Sebring, along with strong finishes at COTA have ensured that she holds a two point lead over Jay Schreibman (Cauley Ferrari of Detroit).  The pair are only a further six points ahead of Gianni Grilli (Ferrari of Quebec).  The top six in Coppa Shell AM are separated by only twenty points, meaning a few strong results over the coming eight races could drastically change the standings.

Schedule.  The weekend will begin on Friday with two twenty minute practice sessions for Ferrari Challenge competitors.  Qualifying will take place on Saturday at 12:20 (all times ET) followed by Race 1 at 3:30pm.  The grid for race 2 will be set based on the fast laps from race 1.  Race 2 will take the green flag at 11:15am on Sunday.