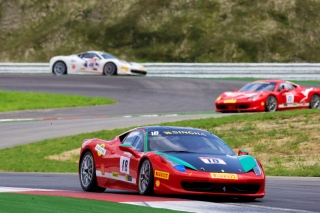 Sepang, Malaysia, September 12th – Two weeks ago the Malaysian circuit of Sepang hosted the fifth round of the 2013 Ferrari Challenge Asia Pacific alongside the iconic 12 hours Malaysia Merdeka Endurance Race. The Ferrari Challenge Asia Pacific race will remain in Malaysia for its six and penultimate round, to take place this weekend, making this the first time this event has been held twice in Malaysia.

In Round 5, Max Blancardi won, unchallenged, in the International class. Thailand’s Pasin Lathouras scored double wins in Trofeo Pirelli while Japan’s Francis Hideki Onda and Canada’s Eric Cheung were triumphant in one race each in the Coppa Shell after a gruelling battle between the contenders, who also had to overcome the challenge of the changeable weather in Sepang.

The battle will resume in Sepang this weekend with vital championship points at stake. In Trofeo Pirelli Thailand’s young challenger Pasin Lathouras currently leads the championship with 174 points from Philippe Prette who stands second with 136. Third place man is Singapore’s Ringo Chong who has 130 points.

In the Coppa Shell championship Eric Cheung holds a clear lead with 173 points over Gregory Teo with 125, waiting in the wings however is David Tjiptobiantaro who currently has 114 points.

Each category will take part in two races together with action that spans three days starting with one day for Open Practice and Free Practice, following with the Qualifying Practice which leads to race day on September 15th.

The much anticipated Grand Finale of Ferrari Challenge race will take place in Mugello, Italy this coming November 7th – 10th.