A special debut for a yellow 599XX 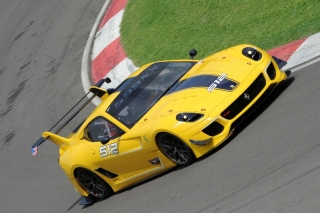 Imola, 8 May – Two days of on-track fun at the Enzo e Dino Ferrari Circuit for drivers involved in the third event of the season for the XX and F1 Clienti programmes.

Eight 599 XX cars were on show at the historic Imola circuit: among these many stars, the one that without a doubt shone brightest was the yellow one of Benjamin and Christine Sloss. It’s special because it was bought at the auction organised by Ferrari to raise funds for the victims of the earthquake that hit the Emilia region of Italy almost a year ago. There were two FXX cars, as well as a 333 SP, the last of the Prototypes built at Maranello. No less than five Formula 1 cars turned out: for the three F2002s, it was a return to a track where, in their racing season, they took a fantastic one-two finish with Michael Schumacher and Rubens Barrichello.

On hand as a special instructor for the event was Giancarlo Fisichella, fresh from a great win obtained with co-driver Gianmaria Bruni in the Silverstone 6 Hours, the second round of the World Endurance Championship.