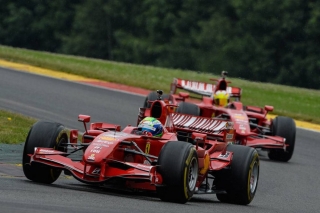 Francorchamps, 28 June 2017 – The two-day event for F1 Clienti and XX Programmes, two of the most exclusive Corse Clienti activities, concluded on the legendary Spa-Francorchamps track.

Schumacher era. The single-seaters lapping the track included a number from the golden age when Michael Schumacher reigned supreme. La Source, Eau Rouge and Raidillon saw a display by three F2001s with which the German won the world title and then an F2002 and a F2004 whose apotheosis came on the Spa-Francorchamps track, with the conquest of Michael’s seventh world title.There was also a V12 engine, that of the 412 T2 raced by Gerhard Berger, the last Prancing Horse F1 car to boast 12 cylinders.

Modern era. An F2007 took part in the two days of testing. This was the racing car with which Kimi Raikkonen won the world drivers’ title and that took the constructors’ title. There were also three F2008s, two driven by Felipe Massa and one by Kimi, two F150° Italias of Fernando Alonso and one F138 also driven by the Spaniard.

F1 and more. The legendary Spa-Francorchamps track not only saw Formula 1 cars but also two splendid F333 SPs, the barchetta built by Ferrari in the mid-1990s for its customer teams. This prototype, the last competition one made by Ferrari, won the 24 Hours of Daytona in 1998 and was one of the stars of the 2016 Finali Mondiali on the classic Florida tri-oval. The cars of the XX Programmes were also out in force, with Marc Gené tutor helping customers make the most of their FXX K, FXX, 599XX and 599XX EVOs.

Gala evening. On Saturday evening, the restaurant nestling on the inside of the Eau Rouge corner hosted a gala evening for customers. It included an exceptional guest of honour, Alessandro Pier Guidi, winner of the 24 Hours in 2015, and recently second in the 6 Hours of Spa-Francorchamps in the FIA WEC championship after a thrilling duel with Sam Bird, his teammate in the 488 GTE no. 71 of AF Corse. 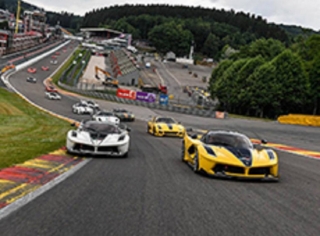 Francorchamps, 27 June 2017 – The first of two test days for the special XX Programmes and F1 Clienti, two of the most exclusive activities run by Attività Sportive GT, have been completed on the Spa-Francorchamps circuit.

Unique track. The track needs no introduction. Spa-Francorchamps is a circuit on which some of the most important pages of motorsport history have been written. It was once over 14 kilometres long and was on public roads. Now it is half that size and is a permanent track. The drivers love it for some of its most famous sections: Eau Rouge, Raidillon, and Stavelot, the high speed corners before the finish line and the Bus Stop chicane.

Exceptional tutors. Ferrari Development Driver Marc Gené guided participants in their pursuit of maximum driving pleasure. Marc helped the customers of the 15 Formula One cars and over 50 of the XX cars to focus on the key points of the track and then assisted them in setting up the car. There were 15 FXX Ks on the Ardennes track, for a total of 15,750 hp, an incredible figure in addition to the other two cars of this very special activity.

Downforce and Extreme Power. Two 599XXs and fourteen 599XX Evos, the second car of the XX Programmes launched in 2009, took to the track. This front-engine car is endowed with extremely sophisticated technologies, such as a system that sucks the air from the undercar to help it adhere to the tarmac. There were also five FXXs, the first car in the series, launched in 2006, whose extraordinary power still makes it a favourite for professional drivers who play the role of tutor.