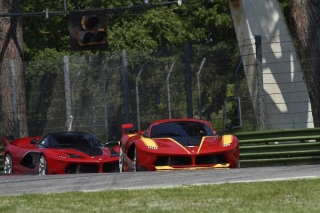 The Imola circuit hosted an intensive two days of free practice sessions for customers of the special F1 Clienti and XX programmes. Over 26 Ferraris took to the track on the banks of the Santerno river for the ninth event in the calendar, ahead of the grand finale at Mugello from 26 to 29 October during the Finali Mondiali.

1990′s. The single-seaters from this decade included the F92A and F399. The latter triumphed with Michael Schumacher at Imola after a race dominated by his duel with the British David Coulthard. However, the F92A was a true concentrate of innovations, especially in aerodynamics. In fact it is remembered as the first Ferrari with a raised nose cone, thanks to the designers Jean Claude Migeot and Steve Nichols, who also endowed it with oval-shaped lateral air intakes separate from the body and, most strikingly, the “double-flat” bottom, which specifically aimed to generate the Venturi effect.

2000s. The cars of the 2000s on the technical track in Romagna were also noteworthy. One of them, the F2002, enabled Michael Schumacher and Rubens Barrichello to win a peremptory double that took Ferrari to the top the constructors’ standings where they stayed until the end of the season. The F2007 driven by Felipe Massa was also on track: a single-seater that won the world championship with Kimi Raikkonen. The F2008, also driven by the Finn and winner of the constructors title, made an appearance, as did the F150° Italia with which Fernando Alonso raced in the 2011 season.

XX Programmes. Customers also drove the 4,909 metres of the Enzo e Dino Ferrari circuit behind the wheel of the cars of the exclusive XX Programme. Seven examples of the FXX K were on track. The most powerful Ferrari ever produced packs a 1000 hp-plus engine whose power derives from the combined action of the heat engine and electric motor. The 599XX, 599XX EVO and the FXX model that kicked off this customer-test activity 10 years ago, all shone during what was a real on-track workshop.

Gala evening. The stars of the F1 Clienti and XX programmes shared their passion for the Prancing Horse during an exclusive gala evening that has always been held for this type of event.