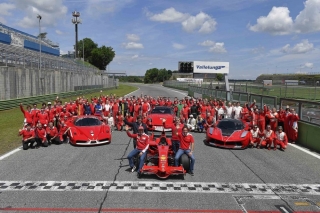 Campagnano di Roma, 18 May 2016 – The second and final day of testing for the F1 Clienti and the cars of the XX Programmes was held on Wednesday at the Vallelunga Autodrome. Nearly 30 prototypes took to the track on the outskirts of Rome, with the cars of the XX Programmes and F1 Clienti pushed to their limits by the customers with the help of precious advice from exclusive tutors like official Ferrari drivers Marc Gené and Olivier Beretta.

Perfect day. The late spring day at Vallelunga with high temperatures and a wonderful sun drew many fans to the circuit stands to enjoy the spectacle of the 21 cars of the XX Programmes, mainly the FXX K. The experimental vehicle is celebrating a year of activities in the hands of its customer-testers who get to enjoy a car boasting 1000-plus horsepower with unprecedented standards of safety and technology. Along with the 11 FXX Ks, there were also the 599XXs and 599XX EVOs and two FXXs, the car first used in the XX Programmes.

An unmistakable roar. As well as the laboratory cars F1 Clienti single-seaters also had a run out. Five were present at Vallelunga, with the 412 T2 of 1995 the public’s favourite. The reason is simple: the engine. The single-seater, which won the Canadian GP with Jean Alesi, was the last Ferrari equipped with a 12-cylinder engine, and everyone remembers the sound of that unit as one of the most thrilling in the history of Formula 1. The show also included two F2008s, the F2007 and the F2002 driven by Rubens Barrichello.

Imperial dinner. The traditional gala dinner hosted in honour of the guests was held on Tuesday evening. Given that Vallelunga is only a few kilometres from Rome, it had to take place in the Imperial Forums of the Eternal City. For the record it was held at the House of the Knights in the Forum of Augustus. At nightfall customers were taken on a journey in time through a series of projections and sounds that brought back the ancient Forum area in all its glory. 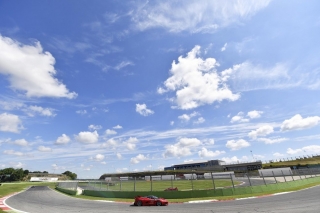 Campagnano di Roma, 17 May 2016 – The special drivers of the Ferrari XX Programmes and F1 Clienti had their first of two days of free practices on Tuesday at the Vallelunga Autodrome. The cars of the XX Programmes dominated, with 21 of the vehicles involved in the first day of testing. Eleven FXX Ks were on track, confirming the extraordinary success of this 1000-plus horsepower car. The 4 km circuit near Rome also saw two 599XXs, six 599XX EVOs and two FXXs, the progenitor car of this exclusive Prancing Horse project.

Formula 1. In addition to the 21 cars of the XX Programmes there were also five Formula 1 single-seaters of F1 Clienti, the companion project to the XX that allows a select group of customers to buy cars pensioned off by the Scuderia and have fun on the track in safety with the advice of experienced drivers like Marc Gené. Two of Felipe Massa’s cars are on the Vallelunga track. In 2008 Massa was in contention for the title until the final race in Brazil, when only on the last lap of the Brazilian Grand Prix did Lewis Hamilton manage to subdue the Brazilian’s onslaught. There was also an F2007 that won the World Championship with Kimi Raikkonen and an F2002, one of the record cars, belonging to Rubens Barrichello. However, the most exciting sound on the first day was the 412 T2 of 1995, the last Prancing Horse Formula 1 car with a 12-cylinder engine.

Programme. The first day began a bit slowly because of rain on the track. There were seven sessions of free practices with nine planned for Wednesday, when the programme will be completed.