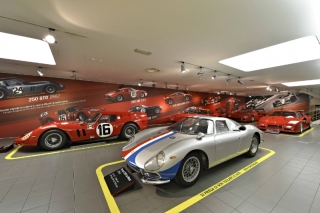 Maranello, 8 March – Today saw the official inauguration at the Ferrari Museum in Maranello of the “Ferrari Supercar. Technology. Design. Myth” exhibition which includes the new LaFerrari, unveiled just a couple of days ago at the Geneva Motor Show, as well as all of the other limited edition special series cars that helped establish the Prancing Horse legend.Opened by Chairman Luca di Montezemolo, “Ferrari Supercar. Technology. Design. Myth” retraces the story of all of the limited edition special series models built by Ferrari, starting with the 250 GTO, including an example of the 1964 version, and continuing with the 1984 GTO, the F40, the F50 and the Enzo, all the way up to the new model which has been named the LaFerrari as it epitomises the sweeping excellence for which the Maranello marque is renowned. Parallel to the limited edition road cars will be the Formula 1 cars that inspired Ferrari’s design in various eras, as well as special track and competition-oriented models, such as the GTO Evoluzione, the F40 Competizione, the 599XX and the FXX.A large section of the exhibition is devoted to the development of the LaFerrari, illustrating both its technical content and styling. The entire process from the car’s initial conception to the approval of the final car is traced, in fact, and visitors also have the opportunity to see two full-scale models in addition to the various stages the car went through in its design and development.Information
The exhibition runs until September 30th. The Museum is open to the public between the hours of 9.30 and 18.00 until May 1st after which date it closes at 19.00. Tickets can be booked online at www.museoferrari.com, as can guided tours at museo@ferrari.com. Special evenings at the Museum can also be booked by private and corporate groups on request at: eventimuseo@ferrari.com. The Skira publisher has created a large and wonderfully rich catalogue especially for the exhibition. It is on sale in the Museum in Maranello.

250 GTO
Probably the most famous of all Ferrari cars, the 250 GTO was built from 1962 to 1964. With just 36 vehicles produced – all of which are still extant – the 250 GTO ruled on the track and on the road, winning the GT Manufacturers’ International Championship three years in a row. GTO stands for the category it raced in: in order to compete, a minimum of 100 vehicles had to be built in a year. When the Federation granted homologation as an evolution of the short-wheelbase 250 GT, it automatically became the 250 GTO, i.e., the homologated GT (GT Omologata).
It proved to be invincible with its 2953 cc V12, an evolution of the Colombo engine. It featured 300 hp, high torque even at low rpm and a 5-speed transmission, which represented a major innovation for the period. Another two key factors that contributed to the success of the 250 GTO was its dry weight of just 880 kg, and its superior agility. Today its value has rocketed to over $20 million.

GTO
Designed for “Group B” races, the GTO project dates back to 1983. The 308 was used as the starting point for the project. The steel chassis was reinforced and work was done on the wheelbase, tracks and wheel size. A radical approach was taken for the twin-turbo V8 engine, with two heat exchangers, just like a F1 car, and the aerodynamics were improved by adding large spoilers. The car was unveiled in 1984 as a road-going vehicle as, in the meantime, the FIA had abandoned Group B racing. It was a resounding success, and instead of the planned 200 vehicles, production reached 272 units (which is nonetheless a small volume). This makes it rare and valuable today.

F40
The unexpected success of the GTO revealed the huge potential for on-road cars built using avant-garde technologies developed for racing. Unveiled at the 1987 Frankfurt Motor Show, the car’s minimalist passenger compartment features only what is strictly needed for driving.
The chassis is made from steel incorporating composite materials and Kevlar. Characterized by the large rear spoiler, the bodywork is made from composite materials. The 478 hp twinturbo engine – 80 hp more than the GTO – allows the car to accelerate from 0 to 100 km/h in 4.1 seconds, with a maximum speed of 324 km/h – simply phenomenal for the time.
Although it was announced that only 400 vehicles would be produced, the success was so overwhelming that Ferrari had to build 1315 cars over five years!

F50
The 50 in the name of this model represents the 50th anniversary of Ferrari, which fell in 1997. The model was unveiled at the Geneva Motor Show in 1995 and was designed at the same time as the last Ferrari sport prototype to be built in Maranello: the 333 SP. The inspiration for this new milestone in Ferrari technology came once again from the world of F1: a perfect combination of a carbon-fibre bodyshell and a V12 engine, just like a singleseater.
In addition, just like a F1 car, the chassis integrated the engine as a stressed member.
The vehicle’s design was extremely original for the time, and features a removable hardtop that can be lodged on board. With only 349 vehicles produced, the F50 is much sought-after by collectors.

Enzo Ferrari
The Enzo dates back to the years of consecutive victories in the Drivers’ and Constructors’ F1 World Championships. It was 2002, and the name of the new model served as a promise of excellence. Even the styling was inspired by F1 and the Enzo was the first road car with a manettino selector on the steering wheel to adjust the handling depending on the use of the car and road conditions. The lightweight and compact V12 engine and the vehicle dynamics systems react to inputs from the manettino, just like on the single-seaters. The system was developed from the technique used by Schumacher to change the car setup in every bend, requiring commands capable of adjusting car setup several times during the same lap. This is how the modern F1 steering wheel and the manettino, as the team and driver called it, were developed.

THE OTHER CARS IN THE EXHIBITION

599XX Evo
The 599 is not officially a supercar, but the XX version definitely belongs to this elite category, for both technical and symbolic reasons. Ferrari has an extraordinary tradition of creating high-performance front-engine vehicles. The 250 GTO is the most significant of these, but it is not the only one. It is interesting to see two berlinettas – both so technologically advanced and with outstanding track performance – side by side, separated by 50 years. At its debut, the 599XX broke the lap record on the famous and challenging Nordschleife, the 22.8 km version of the Nürgburgring track.
Technically speaking, the 599XX is an example of excellence, featuring a 730 hp aspirated V12 engine, with exceptional handling thanks to the weight distribution – 47% on the front and 53% on the rear – and to the sophisticated electronic dynamic controls system. The aerodynamic shape enhanced by the mobile rear spoiler contributes to achieving this outstanding performance. It was built specifically for track use.

GTO Evoluzione
The extraordinary commercial success enjoyed by the GTO instantly revealed to Ferrari the huge opportunities afforded by placing an extremely sporty road car at its clients’ disposal.
This planted the seed for the concept of the F40, the GTO Evoluzione which, however, never actually raced and remained a development model.

F40 Competizione
The F40’s design and characteristics absolutely begged for a track version to be developed.
The Ferrari importers that traditionally took part in endurance racing found the answer to their dreams in the evolution mooted by specialist Michelotto which had already made important contributions on the racing development of the likes of the 308 GTB, for instance.
The car first saw the light of day in 1989 but its development continued until the end of the 1990s yielding record results.

FXX
Ferrari launched a uniquely innovative technical collaboration programme for its most loyal and enthusiastic clients centring around the prototype FXX. The latter car was the most advanced GT ever created by Maranello and its mission was to involve the marque’s most valued owners as Client-Test Drivers.