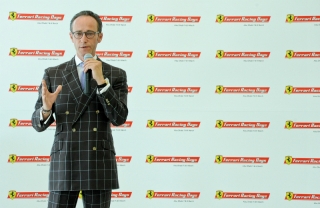 Abu Dhabi-UAE: February 19, 2013 – Ferrari today announced the Middle East debut of ‘Ferrari Racing Days’, promising thrilling track action for owners of the non-competitive Formula one single seater and XX cars, and a F1 Exhibition open on Saturday for the public.

To be held from March 7-9 2013, the wheel-to-wheel extravaganza that will witness a total of 17 cars navigating the Yas Marina circuit in Abu Dhabi is organised by the Ferrari Corse Clienti (Customer Racing) department.

Exclusively designed for F1 Clienti, the event will provide enthusiasts from the region with the first-ever chance to view in action the Ferrari Challenge Trofeo Pirelli Asia Pacific series.

Featuring the 458 – the mid-rear V8 Berlinetta derived from the 458 Italia and the fifth model used by Ferrari in its one-make racing series, the Ferrari Challenge Trofeo Pirelli, now in its 20th year, is highly popular as it brings to the race track novices as well as experienced competitive drivers.

The amateurs have Coppa Shell with a separate classification and final title, while the experts race in the Trofeo Pirelli for the coveted trophy. This balance in the races avoids a one-sided contest and allows expert competitors as well as gentleman drivers to participate on equal terms.

Commenting on the announcement, Giulio Zauner, General Manager, Ferrari Middle East and Africa, said: “The Ferrari Racing Days is held at prominent circuits around the world equipped with the latest safety solutions. We are delighted to host its Middle East debut in the Yas Marina circuit, which has witnessed four Grand Prix.

“An overwhelming number of Ferrari owners from the region and across the world have signed up for the event. Hosting the Racing Days at this classic venue reiterates Ferrari’s commitment to our exclusive clients in the region. We are confident the event will set a benchmark for motorsport activities in the Middle East.”

A unique exhibition from one of Scuderia Ferrari’s official test driver, Marc Gene, will serve as a key highlight of the event. Gene is an accomplished driver having raced in several world class events including Formula 3.

In addition to showcasing twelve 599XX and two FXX, the XX Program will feature three F1. ‘Ferrari Racing Days’ will see owners of the exclusive models put their machines through the paces at the Ferrari Club Challenge.

Kicking off on Thursday 7 March at 3:00pm and running to Saturday 9 March until 11.45pm, public will have access to the event from 3:00pm on Saturday. Tickets are priced for entry into the grand stand at AED25 per person and children below 11 years enter free.

Ferrari World Abu Dhabi will also be a participant at the Ferrari Racing Days to celebrate the marque’s passion for racing. The world’s first and only Ferrari-themed park will kick-start momentum to the ‘Ferrari Racing Days’ from March 1 at the ‘Scuderia Challenge’. In a contest held over seven days, the fastest on each day will win a ‘Hot Lap’ on the Yas Marina Circuit – an experience of true performance, control and exhilaration in a Ferrari driven by a professional driver.

For every Ferraristi, the event is a thrilling must-attend. In September 2012 at the Silverstone circuit in the UK, a Guinness World Record of the largest parade of 964 Ferrari cars was set. In a three car grid, the car trail extended 3.66miles on the Grand Prix circuit. Previous record holders for such feats include Silverstone with 385 cars in 2007 and Fuji circuit with 490 Ferrari cars in 2008.