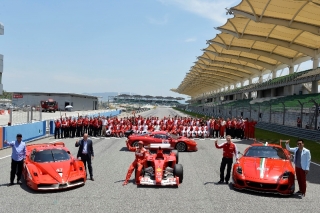 Sepang, 23 February – The first Ferrari Racing Days held in Asia ended with the biggest parade of Ferrari cars ever seen Malaysia. The cars lapped the Sepang circuit for a long while and at a sedate pace, so the spectators in the grandstands could enjoy this magical spectacle to the full. Apart this truly memorable event there was also plenty of adrenalin fueled action along with stylish and enjoyable entertainment. Kicking off the day was another show from the three Formula 1 Clienti cars, that did several laps, perfectly recapturing the feeling of a Grand Prix. It means the spectators were able to enjoy the sight of two F2001s which Michael Schumacher had taken to the world title, as well as the F2007 with which Kimi Raikkonen became champion, all under the watchful eye of the Scuderia’s test driver, Marc Gene. After Formula 1, it was time for the cars in the XX programmes to ramp up the action, as two FXX and seven 599XX cars thrilled spectators in the stands with the noise of the engines and their extreme performance.

“We have a history here in Malaysia and the spectators know the marque and its aura,” said the head of Ferrari Far East, Giuseppe Cattaneo. “We have a long standing group of customers in this country, which we want to consolidate and grow. Here in Sepang, we have seen owners not only from Malaysia, but also from Thailand, Singapore, Indonesia and China and, while this is the first time there’s been a Ferrari Racing Days in Malaysia, we hope we can build on the work we have done here, so that Sepang because an annual event on our calendar.”

Highlights of Race 2 in Sepang

Sepang, 23 February – Here are the highlights of the second race of the weekend’s Asia Pacific Ferrari Challenge, held as part of Ferrari Racing Days, run for the first time at the Sepang circuit. The second race saw Australia’s Steve Wyatt emerge victorious in the Trofeo Pirelli category, while Indonesia’s David Tjiptobiantoro did the double by winning the Coppa Shell again. Bringing the curtain down on this fantastic Ferrari Racing Days event was the biggest parade of privately owned Ferraris ever seen in Malaysia. 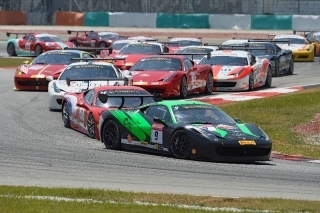 Sepang, 23 February – Australia’s Steve Wyatt in the Trofeo Pirelli and the Indonesian David Tjiptobiantoro in the Coppa Shell were the winners of the second Ferrari Challenge Trofeo Pirelli race, at Malaysia’s Sepang circuit, on the final day of the first Ferrari Racing Days to be held in Asia. Once again, the actual overall winner was Italy’s Max Blancardi, who was ineligible for the championship as he is part of the Pirelli Pro group. Wyatt, who had also taken pole position for the Trofeo Pirelli, made short work of the opposition, especially as yesterday’s winner, Philippe Prette found himself having a difficult day. Second was again the Singaporean, Weng Sun Mok, who beat veteran Italian Angelo Negro into third by almost two and a half seconds. In the Coppa Shell, David Tjiprtobiantoro scored a fantastic double, again starting from fourth on the grid. The Indonesian finished eighth overall and beat his closest pursuers by several seconds. There was yet another close fight for second on the podium between Australia’s Paul Van Lohenhout who once again took the runner up spot by a whisker, this time beating Hong Kong’s Francis Hideki Onda.

Sepang, 22 February – Heres the footage of the first race of the Asia Pacific Ferrari Challenge, staged as part of the first ever Ferrari Racing Days held in Malaysia. The race was part of a track programme that also included the excitement of the Formula 1 Clienti cars, overseen by Scuderia Ferrari test driver Marc Gene and the cars from the XX programmes. Winner of the Trofeo Pirelli was Philippe Prette, while the Coppa Shell went to David Tjiptobiantoro. 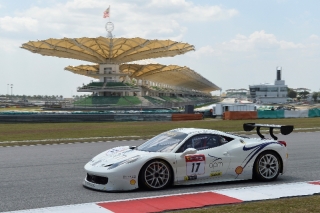 Sepang, 22 February – Philippe Prete from Hong Kong and the Indonesian David Tjiptobiantoro took first blood in the Asia Pacific Ferrari Challenge series, winning the Trofeo Pirelli and Coppa Shell respectively at the Sepang circuit, Malaysia. The circuit was hosting the Ferrari Racing Days event, the first time one has been staged on Asian soil. Actually first past the chequered flag was Italy’s Max Blancardi, but he is not registered in the championship, as he is part of the Pirelli Pro group. There was a great scrap for the Trofeo Pirelli honours with Prette wheel to wheel with the Singaporean Weng Sun Mok for many laps before coming out on top by a mere 171 thousandths. Third was the Australian Steve Wyatt.
David Tjiptobiantoro put on a great show in the Coppa Shell, having already surprised everyone with a fourth place overall on the grid. The Indonesian was sixth overall and finished a long way ahead of his main rivals. However, behind him there was a close battle for second place, with Australia’s Paul Van Lohenhout and Thailand’s Voravud Bhirombhakdi scrapping to the line which they crossed almost together just 191 thousandths apart. Tomorrow morning comes second qualifying and in the early afternoon the race.
In between the Ferrari Challenge qualifying and race, the other Ferrari Racing Days activities entertained the spectators packed into the Sepang grandstands, who, on three occasions, were able to watch the three Formula 1 cars run by the Cliente, shooting past at full speed, as well as the cars from the XX programmes and the 458 Italia GT3, run by the Naza team. Tomorrow the day will end with the biggest ever parade of Ferrari cars ever staged in Malaysia.

A “Speciale” day at Ferrari Racing Days in Sepang 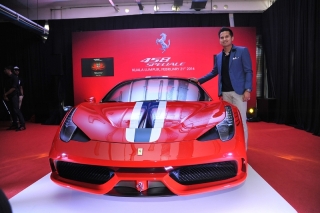 Kuala Lumpur, 21 February – The first ever Ferrari Racing Days to be held in Malaysia got underway today at the Sepang circuit. As for yesterday, that was definitely a “Speciale” day with attention centred on the pits rather than the track with the press and customer launch of the Ferrari 458 Speciale. The car is born out of Ferrari’s philosophy of innovation and avant-garde technical research and has resulted in a completely new, stripped, no compromise sports car concept, in terms of its power unit, aerodynamics and vehicle dynamics.

As for the track action, the tropical sun was perfect for the demonstration runs from the Formula 1 Clienti cars – two F2001s that took the world title with Michael Schumacher and an F2007 that helped Kimi Raikkonen to the title – which thrilled the crowd, while the drivers benefited from the advice of Scuderia Ferrari test driver Marc Gene.

In the Asia Pacific Ferrari Challenge, it was time for free practice, in preparation for tomorrow and Sunday, when the first races of the season take place. Competitors in both categories, Trofeo Pirelli and Coppa Shell seemed very pleased with the handling of the 458 Challenge Evo on the Sepang track, with its corners testing the effectiveness of the new aero kit, produced specifically for these cars taking part in the one-make series.

On board with the 458 Challenge EVO in Sepang

Sepang, 21 February – Here’s an exciting video shot from onboard the new Ferrari 458 Challenge EVO car that is being used in the Ferrari Challenge. Here you can see Australian driver Paul Van Lohenhout tackle the demanding Sepang circuit. The 458 Challenge EVO is fitted with an aerodynamic kit that has further enhanced performance when it comes to balance and its cornering ability, thanks mainly to the new rear wing.

Ferrari Racing Days at Sepang: the Asia-Pacific Challenge gets underway 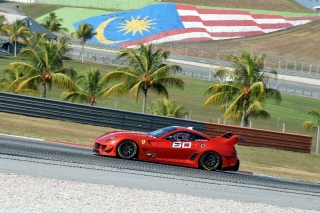 Sepang, 20 February –The first ever Ferrari Racing Days to be held at the Sepang circuit in Malaysia, gets underway tomorrow. Organised by Ferrari Corse Clienti and Ferrari Far East, the event will see on-track action for all the motorsport programmes aimed at Prancing Horse owners.

The highlight of the event will be the first round of the Asia Pacific Ferrari Challenge Trofeo Pirelli, the Ferrari one-make series now in its twenty second year, which features the 458 Challenge EVO, the 8 cylinder car derived from the 458 Italia and the fifth model to be used in the series that see both experienced drivers and gentleman racers on track, in two categories, the Trofeo Pirelli for the former and Coppa Shell for the latter. This is the fourth year of the Asia Pacific series and tomorrow, cars take to the track for free practice before returning on Saturday for the first qualifying sessions and the first race, with a further qualifying and race on Sunday. Tomorrow will be a special day for the 458 Speciale, which is being launched on the Malaysian market.

Over a thousand Ferrari owners are expected to attend, while on track, there will be at least 200 Maranello cars, from Formula 1 Clienti, to the cars of the XX programmes, 458 Challenge and cars owned by enthusiasts from all over Malaysia and neighbouring Singapore. The Ferrari Racing Days at Sepang ends on Sunday evening with a parade of the biggest gathering of Ferraris ever seen in Malaysia. Entry to the Sepang circuit is free.