Ferrari Tribute To Targa Florio – On the trail of legends 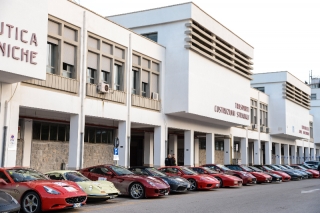 Palermo, 12 October – The final leg of the Targa Florio Ferrari Tribute 2013 sets out on a round trip from Palermo, tackling the roads that circumnavigate the mountains of Madonie, famous as the scene of memorable battles well known by all the fans, such as the Circuito delle Madonie: a strip of ashphalt on which has been written some of the most fascinating chapters in the history of motor sport. The day begins with an atmosphere of tangible excitement, helped by the excellent weather with the sun pumping out a hot 30 °C. The day gets underway in the city where the great Nino Vaccarella, the Sicilian who flew the flag for Ferrari in the 1965 Targa Florio and Vincenzo Florio, who came up with the idea for this event, were born. Then the snaking line of Ferraris passes in front of the grandstands from where the race started in its heyday.

The emotion is clear to see on the faces of those taking part, with respect and interest in one of the landmark places in the history of the motor car. Watching Ferraris from various eras, from the 330 GT 2+2 to the FF, one wonders what it must have been like for the spectators watching the racing machines from the past getting ready to race. With a major crowd in attendance, the crews leave one by one, to rounds of applause. It’s a spine tingling moment as the Maranello cars travel down the straight still bearing allegiance to sponsors from the past on the walls alongside the road, in front of the old stands. It was here, in 1965, that a triumphant Nino Vacarella drove by, having won the race with the late Lorenzo Bandini, aboard a Ferrari 275 P2. Kilometre after kilometre, the legendary Circuito delle Madonie displays its attributes with endless corners, short straights, hairpins and changes of direction, where sports cars such as the F40 feel particularly comfortable. They, probably more than others, with their similar dynamics to the racing machines of the past and their extreme looks, make the biggest impact on the spectators clinging to the highest points on the course.

Of course, an event like the Tribute does not put the same strains on the cars as the original race, but with persistent rain making for slippery roads, the competitors could at least get a feel for the difficulties encountered by the drivers of long ago. One after the other, the various 512 TR, California, 590 GTO among others, complete part of the course, arriving at Castelbuono amid an exultant crowd, filling the streets, despite the strong gusts of wind. After partaking of some wine and food, the group sets off again to tackle the rest of the course, savouring every kilometre of this legendary route, before arriving in Campofelice di Roccella and then heading down the motorway back to Palermo. Here the cars find refuge once again at the University, where, along with the return of nice weather, the spectators embrace the Maranello marvels one last time.

Travelling through the jewels of Sicily 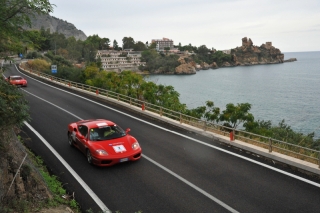 Palermo, 11 October – The second day of the 2013 Targa Florio Ferrari Tribute 2013 sees the teams assemble for the start in a sunny Catania. Among the monuments of the city, which is situated near Mount Etna, classic cars such as the Ferrari 512 BB seem particularly at ease. After a few kilometres on the road, the assorted models including the 550 Barchetta, the Mondial T Cabriolet and the 458 Spider have their tops down: with a temperature of 24 degrees Celsius it is hard to resist the temptation of travelling in the open air. The course continues to wind alongside the volcano that is enjoying a sly rest under a solitary, peaceful cloud, while the group heads towards Caltagirone. The wide variety of countryside presents the participants with glimpses that could be Catalan along the route with acres of short vines. After a brief stop the journey continues in the direction of Caltanisetta, along a mixed stretch of road where the sportiest Ferraris stand out for their manoeuvrability. After bends upon bends, the long snake of scarlet cars arrives at Corso Umberto, where it is greeted by a happy crowd that gazes with great curiosity at the intricacies of the various cars like the 550 Maranello, 328 GTS and 512 TR to name a few. Youngsters, adults, women, children, the public who have come to see the 2013 Targa Florio Ferrari Tribute is very mixed: a sign that the Ferraris have admirers of every age! A little later the caravan gets back moving again en route to Agrigento where it enjoys a memorable passage through the magnificent Valley of Temples, which is a UNESCO World Heritage site. With the striking buildings that hail from the era of Ancient Greece as the background, the Ferraris carry out the traditional timed sections and arrive in the fascinating castle of Chiaramonte. There’s time for a short break before the cars from Maranello are back on the road towards Palermo, the end of today’s stage. Thus, in the final phase of the second day there’s time to travel through a few typical small towns such as Castelvetrano, where the Church of the Purgatory stands, plus Gibellina and Partinico. Late in the evening the last crews reach Palermo University, where the partying students welcome the return of the cars from Maranello that they had already been enthusiastically admiring yesterday morning.

The 2013 Targa Florio Ferrari Tribute is on its way 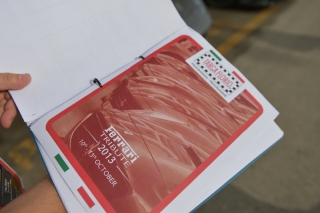 Catania, 10 October – Palermo has seen the start of the 2013 Targa Florio Ferrari Tribute, an event in which the Prancing Horse’s GT cars from yesterday and today relive a historic motor sport race around the stunning roads of Sicily.

After assigning race numbers and the customary briefing, admirers of the scarlet cars had the chance to greet Giancarlo Fisichella, who kicked off the event at Palermo University surrounded by fans hoping for a photo or an autograph. The Ferrari driver took on the role of pacemaker in a 458 Italia at the head of a snake made up of all the Prancing Horse’s cars taking part in the event at Buonfornello. It was a special chance for Ferrari lovers to see the various cars including F12s and 458 Italias but also collection pieces like the F40 or a 275 GTB4 that is as sparkling as it is rare.

After kilometre upon kilometre, the caravan arrives at Cefalù, where the windy road runs alongside a view of wild beauty. To hear the sound of the V8s and the V12s at the exit of the bends is an experience that is hard to forget. While a sudden shower forces the owners of Spiders to put up their hoods, the group arrives at the Nebrodi Natural Park, where the road becomes more demanding and the cars slow down near the speed checks. Finally the weather begins to smile on the participants again with the sun illuminating the beasts from Maranello as soon as the road begins to descend, revealing a typical Irish view. The road is still long and, before arriving in Catania, the halfway point of this first segment, the crews must take on a series of corners at the foot of Mount Etna, crossing a landscape that seems almost lunar. The dark makes the driving experience even more intense and exciting and the cars from Maranello arrive at Catania at about 20.45, to be greeted by a carnival crowd at the Piazza del Duomo.