Testing at the Montmelò circuit – 22 February 2015 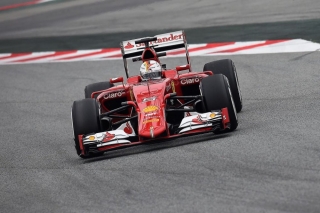 Sebastian Vettel: “First of all, I’d like to wish Fernando a quick recovery. Luckily, we have already received some good news, so I hope he we’ll be back in top form at next week’s test. As for today’s test, I can say that we have focused mainly on the car’s reliability, completing some long-runs, and testing various settings and tyre configurations. We could not run as much as we’d like, but at this stage of winter testing there are always some teething problems you have to deal with. Overall, I can confirm that my feeling with the car is positive and now I’m looking forward to the next week of testing”.

Simone Resta: “Overall, over these past days, we have followed the planned programme, based on development, on fine-tuning various components and strategy. We have also run aerodynamic measurements based on components to be developed in the wind tunnel, along with hardware and setup tests, all while runing different tyre programmes. We had some planned stops in order to change components that had reached the end of their life cycle. We did a lot of practice starts, but we have not yet completed a race simulation, which is in accordance with our programme. The drivers said they have a good feeling with the car and the set-up work has served to improve that, as well as being carried out to adapt to the continually varying weather conditions”. 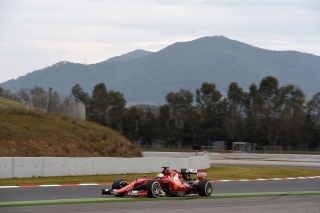 Montmelò, 22 February – Fourth and final day of testing for Scuderia Ferrari at Barcelona. Once again, Sebastian Vettel is at the wheel of the SF15-T. So far, it’s been very cold, but with beautiful sunshine at the Catalunya circuit, although a strong wind blew up around mid-morning, which makes data comparison somewhat difficult. Today, the team is concentrating on some tyre work and on set-up. Sebastian has set the second fastest time of 1.26:312, with 59 laps to his name. With the session being red flagged just before the lunch break, the team opted to stop and get back to work in the afternoon.

Testing at the Montmelò circuit – 21 February 2015 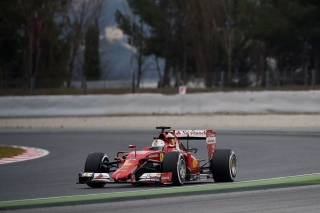 
Sebastian Vettel: “This morning I was sleeping a bit and, coming out of  the pits on cold tyres, I spun. The least I could do was help the guys  clean all the gravel out of the car! Then, we worked mainly on  reliability, doing a good number of laps. We are managing to run without too many problems, but it’s really hard to tell where we are compared to the others. We need to work day by day to try and understand our car. In general, both me and Kimi are pleased with the way it handles, but there’s still a lot to do. The conditions today were difficult for everyone, as the cold meant the track was pretty slippery. It was good to see our President in the garage and I’mpleased he is bringing his support”. 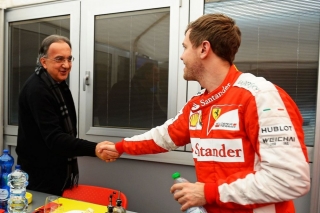 Montmelò, 21 February –The third day of testing for Scuderia Ferrari at the Catalan track saw a change of driver, with Sebastian Vettel driving the SF15-T today and tomorrow. The weather did not have a particularly warm welcome for the German, with intermittent rain falling throughout the morning, which made the track very slippery. In fact, because of this, Sebastian went off the track at Turn 5 on his first out-lap, but no damage was done. After that, he went on to complete 46 laps over the course of the morning, the quickest in a time of 1.26:407, third fastest overall. Today’s programme again features aerodynamic and set-up work. As the rain intensified, the team decided to slightly modify the programme, with normal work set to resume once it’s over.

Testing at the Montmelò circuit – 20 February 2015 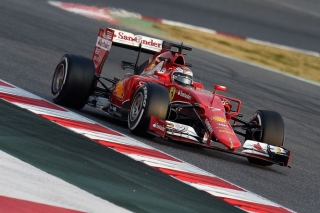 Kimi Raikkonen: “Today was not ideal, we had some small issues which prevented us from running as much as we wanted, but still we managed to do other stuff, try things and learn. We are going in the right direction in all areas and the team did a good job over the winter. Of course, racing is a different story from testing, but so far it has been good. The team bosses have managed to put the right people in the right places. It’s still early days, but everybody seems to enjoy it more. For the next test we’ll try to put the right things into the car”.

Maurizio meets the press in Barcelona 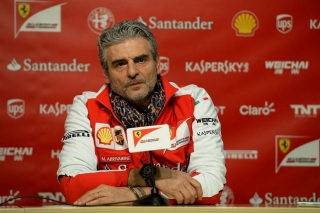 Montmelò, 20 February –On the second day of testing for Scuderia Ferrari at the Montmelo circuit, Maurizio Arrivabene met with the journalists at the circuit. “My job is to rebuild the team, to create a calm environment and to ensure that the great determination I have seen in every member of the team is rewarded with results. I have never believed in such a thing as a winter championship: we have our feet on the ground and as I said already in December, winning two races could be considered a success, three would be perfect and if we win four, I will run barefoot on the hills of Maranello. We have two fantastic drivers and they are also great friends and that can only benefit the whole team. I wish to underline yet again that the most important thing is for us all to pull together, with common goals and with the determination I saw in the eyes of those who were even at work on 24 and 31 December, in the Mechanical or Composites departments, to the backdrop of the sound of the engines rather than “Jingle Bells.” I have seen that there are exceptional people in Maranello and each one of them is making a contribution. However, it’s clear the car does not belong to any one person, it belongs to Ferrari and its people.”

Testing at the Montmelò circuit – 19 February 2015 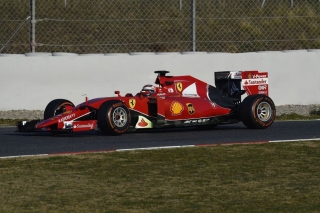 Kimi Raikkonen: “It’s not that different from Jerez, we don’t know about the fuel other cars
had, and some of them were on soft tyres. We keep doing our stuff, have made our plan and try
to follow it. The car is a completely different story from last year’s, we’ve still got a long way
ahead of us but the team is working well and has produced a very nice car”.

James Allison: “Overall we are content with the day, happy because the work we’ve been doing
in learning how the car responds to set-up changes was very satisfactory, less happy with the
laps count for the day. I hope that in the remaining days we get some more mileage under our
belt”. 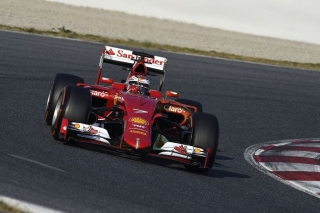 Montmelò, 19 February –This is the first of four days testing for Scuderia Ferrari at Montmelò’s Catalunya circuit, which, as usual, will play host to the first European round of the Formula One season. With just over 20 days to go to the start of the championship, Kimi Raikkonen is at the wheel of the SF15-T.

The Finn is working on set-up testing, long runs and practice starts. For much of the morning, he was second fastest, before taking the break earlier than planned, so that the mechanics could carry out some checks on the car. This afternoon, Scuderia Ferrari will continue with the programme, which includes trying various tyre compounds.