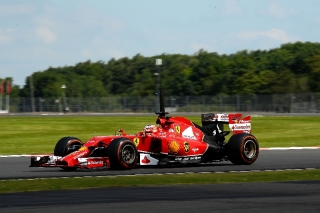 Silverstone, 9 July – This was the final day of testing at Silverstone for Scuderia Ferrari and the other Formula 1 teams. At the wheel of an F14 T for the first time was Frenchman Jules Bianchi, the Ferrari Driver Academy driver, who currently races for Marussia. He did 89 laps, the best being a 1.35.262, the fastest of the day.

Bianchi worked on car set-up, starting in the morning with the settings used by Fernando Alonso and Kimi Raikkonen and then trying some new ones. The programme also involved development work on the latest updates.

At the end of the session, Jules was pleased with the day’s work. “I am happy to have been of use to the team,” he told the journalists. “We completed our programme and by the end of the afternoon, we were lapping fairly quickly.” Asked what feeling he had driving the Ferrari, Bianchi had this to say. “I found out on Monday I’d be driving the Ferrari in place of Kimi. It was obviously very exciting. I am part of the Maranello family, as I am an FDA driver and for every one of us, our goal is to get to drive this car in Formula 1. I know it’s not yet time, but I am working to show the team I am ready for it. Now I will be focusing again on my season with Marussia. So far, it’s been a positive year, but there are still a lot of races to go and I’d like to get some more good results.”

Testing at the Silverstone Circuit – 9 July 2014 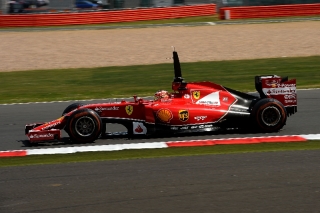 Jules Bianchi set the fastest time in today’s test, driving for Scuderia Ferrari at the third in-season test session. On the agenda for the Marussia F1 Team driver were aerodynamic and set-up tests on the F14 T. The Frenchman, on the books with the Ferrari Driver Academy since 2010, did a lot of running on the Medium and Hard tyres, as well as doing some practice starts on the softer of the two compounds.

“By the end of the day I got a really good feeling in the car, even if at the start, it was not so easy adapting to a car that’s very different to the one I race. The parameters are completely different and I spent the first runs getting used to it. Today we worked on race set-up, trying various settings, both old and new, aimed at producing improvements in the coming races. Putting on a Ferrari race suit is always a special feeling and I hope one day I can wear it as a race driver, even if I have a lot to learn. But above all, I have a job to do for my Marussia team and so far the season is going really well.”

With the test over, the next item on the agenda for the Scuderia is the German Grand Prix, the tenth round of the World Championship, which takes place in two weekends’ time at the Hockenheim circuit. 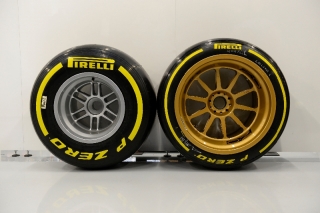 Maranello, 9 July – On the second day of the Silverstone test, Pirelli ran out an experimental 18 inch tyre which in the next years could replace the 13 inch one currently used in Formula 1. The diameter of these tyres is 30 millimetres bigger and it has the same width as the current ones. Ferrari therefore asked its fans through Twitter with the hashtag #FerrariFanSurvey which tyre they preferred, posting photos of each. In the few hours the survey ran, over 3000 fans voted and their opinion was pretty clear: 70% preferred the 18 inch wheels and tyres.

49 laps for Pedro at Silverstone 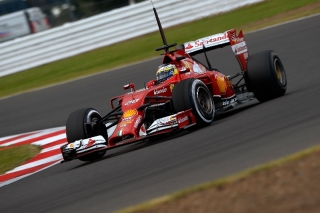 Silverstone 8 July – Today was the first of two days of testing for all the Formula 1 teams including Scuderia Ferrari. The day was given over to testing the 2015 Pirelli tyres and the Scuderia used the opportunity to check the correlation between the F14 T on track and in the simulator. Pedro de la Rosa, who shares simulator duties with Andrea Bertolini and Davide Rigon was at the wheel on track. The Spaniard did 49 laps, the fastest in 1.37.988, running with a heavy fuel load. The day came to a premature end because of a loss of coolant and solving the problem put an end to track activity for the day.

It was Pedro’s first time in the F14 T. “I am very happy to be back in the car, because no simulator can compare to actually driving a car on track. It was enjoyable getting to grips with the circuit, as I miss it and miss training in race trim. That aside, I am very pleased with the correlation we saw between the car and the simulator. That is a very important factor, as Formula 1 testing is reduced still further, obliging everyone to do more simulation. Maybe this needs a rethink, not just for the test drivers, who do too little driving, but for the youngsters and for Formula 1 as a whole.”

Today, Pedro was working in tandem with Fernando Alonso, who was running in the Maranello simulator in a reversal of what usually happens over a race weekend. “Fernando as we know is very professional, but I must say it felt a bit strange knowing a world champion was working for me while I was on track at Silverstone.” Felipe Massa was fastest today, taking his Williams round in 1.35.242. Tomorrow, Jules Bianchi will drive the F14 T.

Testing at the Silverstone Circuit – 8 July 2014 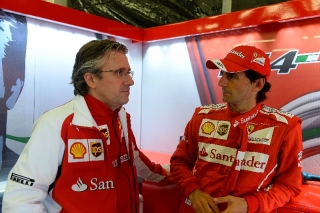 2015 tyres were on the agenda for the first day of the Silverstone test, the third in-season session, following those in Bahrain and Barcelona. Pedro de la Rosa spent the day working solely on tyre development aimed at next season at the wheel of Scuderia Ferrari’s F14 T. The morning and afternoon’s work on prototype Pirellis unfortunately ended about an hour early because of a coolant leak.

“It was great to be able to drive the actual car after so much work in the simulator, especially at a track like Silverstone. I think today was very useful both for me and for the team. We worked a lot on race simulation, always running with a high fuel load, so as to understand as much as possible about the new tyres. We learned a lot and even if I can’t make a direct comparison to this year’s tyres, the feeling I got is that they do represent a step forward.”

Tomorrow, the final day of the test, the Spanish driver hands over to his colleague Jules Bianchi. The young French Marussia F1 Team driver, a member of Maranello’s Ferrari Driver Academy is standing in for Kimi Raikkonen, who has been given time to fully recover, so as to be ready for the next championship round at Hockenheim, over the weekend of 20 July. 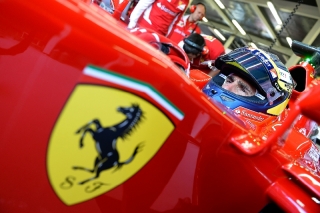 Maranello, 7 July – Kimi Raikkonen is recovering from the frightening accident on the opening lap of the British Grand Prix. The Scuderia Ferrari driver still has pain and some bruising in his left ankle and knee after his car hit the barriers. Therefore Scuderia Ferrari has decided to rest the Finn so that he can be fully fit for the German Grand Prix on 20th July at Hockenheim.
Therefore the driver line-up for the Silverstone test has been changed: tomorrow for the first day, test driver Pedro de la Rosa will be at the wheel of the F14 T and on Wednesday, Jules Bianchi will stand in for Raikkonen. The Frenchman has been on the books at the Ferrari Driver Academy since 2010 and currently races in Formula 1 for Marussia.

Pedro de la Rosa finally gets to drive the F14 T for real, having done many kilometres in its virtual cockpit on the simulator, where he shares the work with Davide Rigon and Andrea Bertolini. Pedro will therefore be able to make a comparison and give the engineers some useful feedback. During his day on track, a comparative test will take place at the same time back in Maranello and in a reverse of the usual situation, it will be Pedro de la Rosa on track and Fernando Alonso in the simulator.
Jules Bianchi will have his first run on the F14 T, back at the wheel of a Ferrari for the first time since the Pirelli tyre test in December 2013. The Frenchman is having a great season, securing his and Marussia’s first ever points when he finished ninth in Monaco.