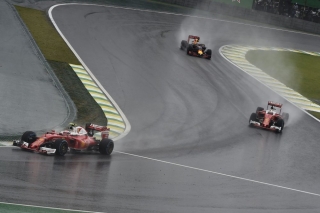 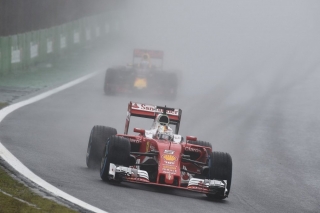 Maurizio Arrivabene: “Maybe we could have achieved more, both yesterday and today, but no room for complaining now. Kimi’s accident was a shame, while Seb had a great comeback after spinning off track. Now let’s focus onto Abu Dhabi: it’s the last race of the season but, as we always say, we’re not giving up till the end.”

Kimi Raikkonen: “The conditions today were not the easiest ones: it was very tricky, and when you do many laps behind the Safety Car it gets even more difficult. It was not raining heavily, but there was a lot of standing water. The biggest problem was the aquaplaning and I got it in a place where I was not expecting it: I spun off on the straight! I almost got the car back, but then I went off in a pretty bad place. The Wet tires are very vulnerable, easy to aquaplaning. It obviously depends on the circuit and on many other things, but comparing to some years ago, those tires could handle this kind of water with no issues of aquaplaning.”

Sebastian Vettel: “Obviously, today it was not ideal: in the first part of the race I span, I had some aquaplaning but I wasn’t the only one. I think it was a good recovering in the end, it was difficult to come back, and I struggled to get past Sainz: I don’t know why it took me a lot of laps before I really started to feel well in the car, and then it was too late. About the duel with Verstappen, I think I was racing side by side to him and he saw me. I still had a little bit of my nose ahead, he was much faster so it was about making the corner and he got past. Not a difficult passing manoeuver, but I don’t think it was fully correct. But I wouldn’t complain about anything today: I think I was not the only one who got caught out by the aquaplaning, but luckily I didn’t crash.” 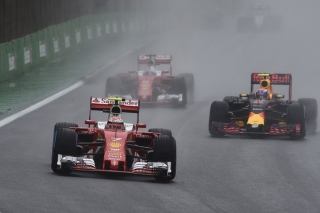 Seb in the points, Kimi retires

Sao Paulo, 13 November – Sebastian Vettel finished today’s Brazilian Grand Prix at Interlagos in fifth place. It rained heavily throughout and the race was twice red flagged. Kimi Raikkonen’s race lasted just 19 laps, as he spun on the main straight shortly after the end of the second Safety Car period, crashing heavily into the barriers.
Lewis Hamilton stood on the top step of the podium, winning for Mercedes. 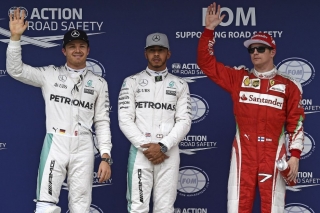 Kimi Raikkonen: “Today everything felt a bit more normal than yesterday and I was happier with the car. Overall it was easier for everybody, the cooler temperatures helped, yesterday the track was very hot. To be honest the feeling in the last lap was not so good, the front was sliding in the first two corners and I struggled a bit in the middle sector to put the lap together. I knew that it was better than the previous one but I thought it wouldn’t be enough because it was not an ideal one; It was good enough to be third and I’m positively surprised. Mercedes was too far but today it worked out pretty well and we can be happy with this result. There is potential in the car, we are getting where we should be. Tomorrow we can only do our best, with weather conditions you never know and things can quickly change.”

Sebastian Vettel: “Today my last run in Q3 was not ideal: I think third position was possible, but I was probably a bit conservative around the last corner. All in all, though, I think it was a good session: the car was behaving well, but maybe in the end I could have pulled out a little bit more out of it. Yesterday on a single lap we were not particularly strong, we struggled a bit, but I think that in the long run we were quite good: so for tomorrow, if it’s dry, we should be in reasonable shape. Mercedes looked very fast also yesterday in the long runs, so obviously we’ll try to stay with them but our main rival I guess will be Red Bull, which had similar pace to us today. In the race I think we’re usually a little bit faster, so hopefully we can get the job done tomorrow. If it rains it will be the first time for everyone this weekend: but it is what it is, I think we have enough rain tires…”

Brazilian Grand Prix – Ferrari on the second and third row 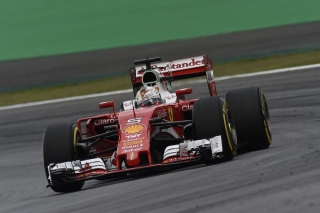 Sao Paulo, 12 November – Come the end of this afternoon’s qualifying session for the Brazilian Grand Prix at the Autodromo Carlos Pace in Sao Paulo, Kimi Raikkonen found himself in third place with a time of 1.11.404, while Sebastian Vettel was two places behind his team-mate, fifth in 1.11.495.
Lewis Hamilton will start tomorrow’s race from pole position having taken his Mercedes round in a time of 1.10.736. 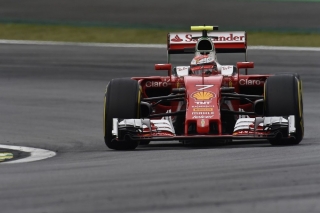 Sao Paulo, 12 November – Conditions were completely different at the Interlagos circuit today, with temperatures only just making the 20 °C mark and rain clouds hovering overhead, whereas yesterday’s early track action for the Brazilian Grand Prix had taken place in warm, dry weather. The third free practice session got underway on a damp track that dried out quite quickly after the installation laps. Sebastian Vettel and Kimi Raikkonen needed only a single run on Wet tyres, before both Ferraris used two sets of Softs each to work on qualifying set-up. Vettel did 14 laps, the best in 1.11.959, while team-mate Raikkonen was right behind with a 1.12.027. 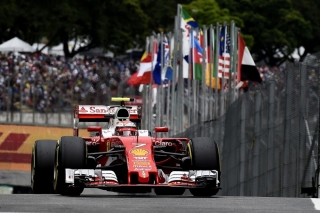 Kimi Raikkonen: “It was a pretty normal Friday: we tried different things to make it better for tomorrow. It was a bit tricky to find the balance, the set-up is not ideal yet, but we are going in the right direction. I only did a few laps with the Soft, it felt pretty ok and obviously it has the best grip. Unfortunately at the end of the second session we had an issue with one visor which obstructed the cooling duct: the brakes overheated and I had to stop.”

Sebastian Vettel: “I think it was a tricky day. The track was very slippery, the temperature hot, and I think everybody was struggling with the tires. It was a bit difficult to find the rhythm. The long run was a bit better for us: I haven’t seen what the others were doing, but I felt a bit more confident with more time and more laps in the car. So in total we tried a lot of things, and now we need to go and see what actually was best. Towards the end of the day it seemed to calm down a bit more, finding the rhythm, which wasn’t the case for the short run, for the fast lap, where I wasn’t very happy. The good news today are that the gaps were very close. Mercedes for sure, as expected, is a bit up front: but other than that, if it stays like this, it bodes well for tomorrow.” 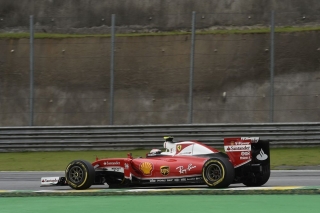 Sao Paulo, 11 November – First impressions from the Interlagos circuit, where the second free practice session for the Brazilian Grand Prix has just come to an end. Sebastian Vettel and Kimi Raikkonen both ran Soft tyres on their Ferraris for a qualifying simulation. Then, when it came to working on race pace, they chose different paths. Vettel ran one set of Mediums, setting the seventh quickest time of 1.13.002, ahead of Raikkonen, who started and finished on Hard tyres, setting a 1.13.047, to secure eighth place. Towards, the end, Kimi’s session was disrupted by a problem with the left rear brake, after a tear-off visor from another driver blocked the cooling duct.
Lewis Hamilton was quickest for Mercedes in 1.12.271. 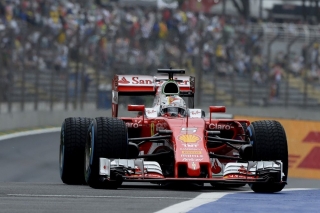 Seb and Kimi ninth and tenth in FP1

Sao Paulo, 11 November – The three days of action at the Brazilian Grand Prix got underway with the first free practice session at the circuit named in memory of José Carlos Pace in Sao Paulo. It is the 44th edition of this race. The Ferraris are ninth and tenth on the time sheet, separated by just two thousandths of a second with Sebastian Vettel posting a time of 1.13.567 to finish ahead of Kimi Raikkonen who did a 1.13.569. Both Ferrari men used two sets of Medium tyres, working on a programme that featured the use of data acquisition sensors. Kimi also tried a Halo system on his installation lap.
Quickest in the session was Mercedes driver Lewis Hamilton with a time of 1.11.895. 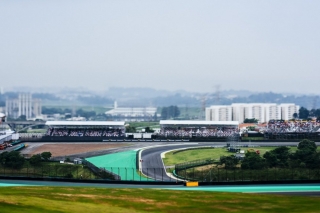 Maranello, 8 November – For the penultimate act on this long calendar, this weekend the Formula World Championship touches down in Brazil, at the Autodromo José Carlos Pace, in a suburb of Sao Paulo. The circuit has hosted 33 Brazilian Grands Prix, with the other ten in the race’s history held at the Jacarepagua circuit, to the southwest of Rio de Janeiro. The Interlagos circuit lies between two artificial lakes, Guarapiranga and Billings and features a tight and twisty section mixed with high speed parts. Its fifteen corners are a tricky challenge, to which can be added the fact the track sits at 800 metres above sea level. Furthermore, along with Austin, Singapore and Abu Dhabi, it is one of the few circuits that runs anti-clockwise.

“It’s a good place to go” reckons Kimi Raikkonen, speaking prior to tackling his 13th weekend at Interlagos, the track where he clinched the World Championship title with the Scuderia in 2007. “It’s a different and “old”, traditional circuit. It’s about short laps and not so many corners, but it’s hard to make a very good lap time and the grid is always very tight there. To lose one tenth means losing a lot of places. Also, there aren’t so many circuits going in an anti-clockwise direction,  so it’s always different. Obviously it has been resurfaced many times, and it always goes very well at first. But then year by year it becomes more and more bumpy and it makes it more difficult. They changed the kerbs a bit, so the flow of the circuit also changed a bit. However, it’s one of those circuits where it’s difficult to go fast even if it might not be so tricky to drive.”