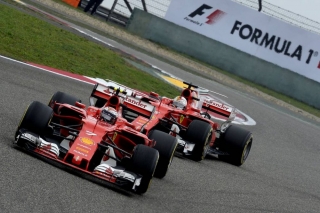 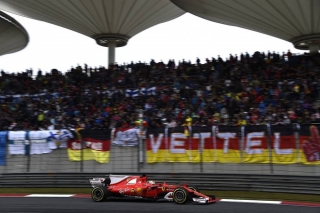 Maurizio Arrivabene: “Today, on a track and in conditions which were very different from those we had in Melbourne, we proved that we have a strong car. Sebastian drove a very good race, and the fact that the safety car came out right after his first tire change certainly didn’t help. Perhaps, without that interruption, the result could have been even better. Now all the team is already focused onto the next race in Bahrain.”

Sebastian Vettel: “We can be happy with today’s results. The race was a lot of fun, very entertaining. Conditions were tricky at the start, you never know what can happen in those moments, so I was perhaps a bit too conservative. Then we chose to change tires since the track was quickly drying out, so that we could take advantage from the slicks; but luck was not on our side as the safety car came in right after. I can’t say how much this affected the final result, it was still a long way from there to the finish, but I think it had an effect. From then I had to work my way through the field, and I had a tense wheel-to-wheel fight with Ricciardo. I like this way of overtaking, when gaining position comes at a price and not simply by opening up the DRS. At that moment though, the gap to Lewis had widened, and I kept pushing to keep some pressure on him, while asking my engineer what pace was needed for me to catch him. I think that pace-wise we were a match today, sometimes he was faster, sometimes I was: if we can fight with Mercedes also in Bahrain that will be again good news. We can still improve.”

Kimi Raikkonen: “It was not a very strong race, the car felt good with fresh tires, but we seemed to lose the front very quickly and I was struggling; in a place like this that’s very tricky and gives a lot of laptime away. I feel that, even with that, we should have had a better result: maybe we could have changed the tires a bit earlier, but it’s always easy to speak after the race, now we have look at the data and understand. This result is far from ideal but this is what we have got today, hopefully next week we can make things better.” 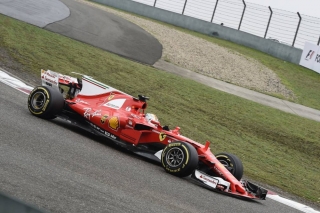 Seb takes the runner-up spot with Kimi fifth. The Safety Car was key

Shanghai, 9 April – Scuderia Ferrari leaves the Chinese Grand Prix with a further 28 points to its name, thanks to a second place for Sebastian Vettel and a fifth for Kimi Raikkonen. The race got underway on a damp track, with Seb making an early stop to change from Intermediate to Soft tyres, but immediately after that the Safety Car came out because of Giovinazzi’s accident and wiped out the advantage of that tactical move, as all the drivers had to come through pit lane. Seb then put on a show, passing Kimi, Ricciardo and Verstappen, before closing on the leader Hamilton. Right from next weekend, F1 is back in action at Bahrain’s Sakhir circuit. 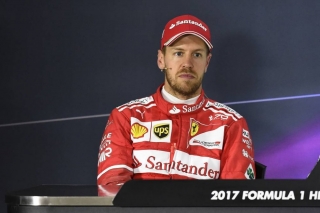 Shanghai, April 8th – “Tomorrow is another day” said Seb over the radio, sending thanks to all the team at the end of his qualifying lap which yielded Position 2 on the grid.“It was a bit closer than in Australia, so a good session overall with lots of chances for tomorrow. We’ll see what the race can bring, with the different conditions and everything. Of course I would have liked to be even closer, knowing that the Mercedes would be very strong in Q3, as they proved to be. We had some luck with Valtteri, because when you’re a thousand of a second apart, it could be one way or the other. I was happy with my lap, even if I braked a bit too early for the last corner, hit the kerb hard and had to wait for the car to settle. That’s where I lost a bit of time, but not all the gap to Lewis. There wasn’t much more I could have gained. So this result on a totally different track, with conditions significantly cooler than Melbourne, is definitely good news. The confidence is there, I trust what the car is telling me and she seems to respond to what I tell her. It’s a good match but we need to improve further.

Chinese Grand Prix – “Not bad, but can do better” 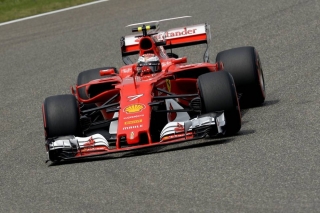 Kimi after 4th grid place: details need to be improved

Shanghai, April 8th – Kimi Raikkonen had been consistently fast throughout qualifying, then lost out a little bit right at the end, where hundredths of seconds make the difference. He ended up with fourth on the grid. “I’m not that surprised from the result after strong performance in Q2, because in the end I was struggling a bit with the front end, especially in the first corners; in Turn 3 there was not much we could gain. It has been tricky to get everything right, with the limited running we had yesterday, and we’re still not 100 per cent where we want to be, up there in front. There are some details in the set-up that need to be improved, and as you push more they become more apparent, but it’s already better than in Melbourne. Handling-wise the car wasn’t bad, even though I had experienced understeer in the beginning and then, for whatever reason, it changed to oversteer. In Q2 I made two runs, because we had tires available so why not go out and see what the other cars were doing? Conditions will be different for tomorrow and there will be a bit of guessing for everyone if it rains, so we’ll see”. 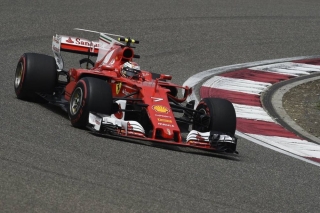 Shanghai, 8 April –Yet again it was all very close in the battle for qualifying for tomorrow’s Chinese Grand Prix. At the end of the session, Sebastian Vettel found himself in second place thanks to a lap in 1’31”864, which is 186 thousandths off the pole time, set by Lewis Hamilton. Kimi Raikkonen is on the second row, with the fourth fastest time of 1’32”140. The two SF70H cars comfortably made it through Q1, only running the Soft tyres, before switching to the Supersofts in the second and third parts. Qualifying took place in variable conditions, with a strong wind blowing. No rain fell, however that is on the cards for tomorrow’s race. 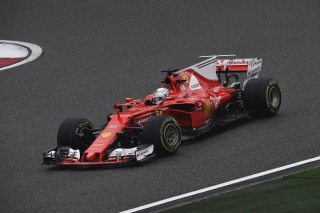 Seb and Kimi complete no timed laps. Practice a wash-out for everyone

Shanghai, 7 April – Three laps in the first session, none in the second. Rain and fog, or more accurately smog, meant the medical helicopter was unable to fly, so that Friday’s practice was effectively cancelled. In the morning, Seb Vettel went out on track just twice, once with the extreme wet tyres and once on intermediates, just to get an idea of the track condition. Kimi Raikkonen did a single lap on the extreme wets, but there was no point in doing more. In the afternoon, the entire field stayed in the garages, with the circuit in constant contact with the Shanghai city airport, but as landing there was deemed impossible, the start of the session was repeatedly delayed until there was no time left as the finish time of 15.30 approached.

Vettel’s main concern was for the fans: “A shame about today, especially for the people who came here to watch, but what else could we do? Over the past few days, there have been so many fans and so many messages from people saying how delighted they were with the result in Australia. Let’s see what we can do tomorrow and let’s hope we have the right set-up, otherwise it will be difficult. However, I’d add that I’m confident we can do it and tomorrow the weather will be better.”

Kimi’s comments were equally succinct: “Today we learned nothing: after the installation lap we wanted to go back out on track, but the session was interrupted. It’s a shame, but it’s the same for everyone. You can’t change the weather and sometimes things like this happen. It was not an ideal day, but even if we had run today, it would have been in the wet and tomorrow it’s not due to rain. So we must wait and see what the weather will be and how things will go.” 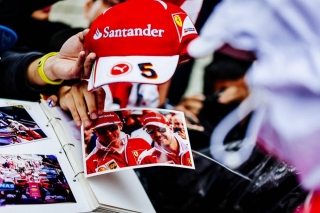 Kimi and Seb: “One race at a time, let’s just try and do well”

Shanghai, April 6th – A new challenge awaits Scuderia Ferrari drivers in China, where teams were welcomed by heavy rain on Thursday . “This circuit is completely different from the one in Melbourne, more of a ‘normal’ track”, says Kimi. “It’s way too early to know how things will go, we haven’t run a single lap yet and the conditions may change very quickly. At the last race in Melbourne the car was feeling good when we were running. The team was very happy for Seb’s win , it was a great result also for all those working at home. We have a good team, but we have only done one race, the season is long, and the tracks are all different. We have to keep doing a good job , improve things and minimize mistakes”.

As for Seb, winning in Melbourne hasn’t changed his feet-on-the-ground attitude: “The real expectations we have is to try and do well. Good conditions and good luck will be important, as well as the set-up of the car. If we can be close to Mercedes that means we can be close to the top: we will just try to do well and then we will see what it will be. We are working better as a team and have improved from last year. We did very well in Australia, but that was only one race. Still, we have potential and can do better”.

Scuderia Ferrari, the winner of the first ever GP held here, is already in China

Maranello, 5 aprile – It’s now a classic on the calendar, but when it was first held in 2004, it caused quite a stir. A Formula 1 race in China would have been unthinkable a few years earlier, even in a city like Shanghai which was the first to open up trade with the West. For the record, Scuderia Ferrari won the maiden event with Rubens Barrichello. Thirteen years later, Scuderia Ferrari is again in Shanghai having travelled there directly from Australia. On arrival, the team encountered spring-like changeable weather and the forecast for the weekend includes a bit of everything including the chance of rain. The Shanghai International Circuit is interesting and demanding, running clockwise, with a very long 1.170 kilometre-long straight and corners that give the tyres a hard time, especially the front left. For this event, Pirelli is providing the Medium, Soft and Supersoft compounds. Shanghai also kicks off the first “back-to-back” of the 2017 season and once the race is over, it will already be time to prepare for the next round at Sakhir in Bahrain, the following weekend.