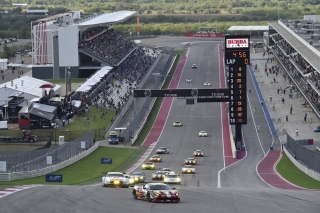 World Endurance Championship: A difficult race for Ferrari in the Austin 6 Hours 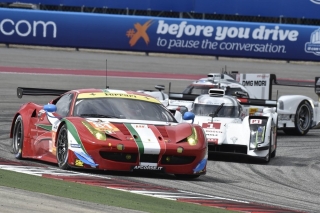 Austin, 20 September – The curtain has come down on the Austin 6 Hours, the fourth round of the FIA World Endurance Championship. It was a spectacular, incident packed race with wheel to wheel fights that held the crowd spellbound until the very last lap. Once again, changeable weather made life tough for the drivers. After a little over an hour and a half, a heavy storm hit the American track, making the track undriveable so that the race was red flagged for a while. The rain at the start made life very difficult for the Ferraris involved in the title fight.
La vittoria nella classe LMGTEPro è dunque andata all’Aston Martin di Turner-Mücke che ha preceduto la Porsche del team formato da Pilet-Makowiecki e la Ferrari n.51 di Bruni e Vilander. Quinta l’altra Ferrari del team AF Corse dei giovani Davide Rigon e James Calado.
“E’ stata una gara molto difficile – ha commentato Gimmi Bruni a cui ha fatto eco il compagno di scuderia Toni Vilander al termine della gara – la condizione meteo ha giocato a nostro svantaggio, con le gomme da bagnato siamo stati meno competitivi ma questo terzo posto è comunque importante perchè ci ha permesso di andare a punti e restare in testa al campionato” Victory in the LMGTEPro class therefore went to the Aston Martin of Turner-Mücke, that crossed the line ahead of the Porsche of the Pilet-Makowiecki duo and the 51 Ferrari of Bruni and Vilander. Fifth was the other Ferrari entered by AF Corse for the youngsters, Davide Rigon and James Calado.
“It was a very difficult race,” commented Gimmi Bruni, a sentiment echoed by team-mate Toni Vilander at the end of the race. “The weather worked against us, as we were less competitive on the raod tyres, but this third place is nevertheless important because it means we scored enough points to stay in the lead of the championship.”

In the LMGTEAm class, Aston Martin took the honours with the number 98 car of Dalla Lana-Lamy-Nygaard. All the other Ferraris entered finished just off the podium. Fourth and fifth respectively were the 61 car of Cioci-Venturi-Companc and the number 90 of Roda-Ruberti-Segal (8 Star Motorsports). Sixth and seventh were Kron-Jönsson-Collins and Wyatt-Rugolo-Bertolini entered respectively by Krohn Racing AF Corse. The outright winner was the Audi Number 2 of Fässler-Lotterer-Tréluyer. The next round is the Fuji 6 Hours, in Japan on October 12th.

World Endurance Championship – Pole Position for Ferrari No. 51 and Bruni and Vilander 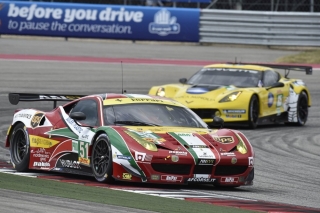 Austin, 19 September- fourth round of the World Endurance Championship sees the engines fire up at Austin, Texas, for the first time since the Le Mans 24 Hours and today’s schedule for the Ferrari 458 GT2 cars fighting for the honours in the GTE class was all about the final free practice session and qualifying. Rain and changeable weather made life difficult on track, but the AF Corse 51 Ferrari got off on the right foot at the Circuit of the Americas. In LMGTEPro, starting ahead of the field will be the car of Gimmi Bruni and Toni Vilander who finished half a second ahead of the Aston Martin of Turner-Mucke and the Porsche of Makowiecki-Pilet, thus making for a successful day. The other Ferrari 458 GT2 of James Calado and Davide Rigon qualified sixth.

“I’m very happy with this result, was Vilander’s immediate comment. “The rain at the start certainly didn’t help but in the end we got a great pole. However, we have to remember there’s still a six hour race ahead of us.” “It was great today and this qualifying result was really a team effort,” added team-mate Gimmi Bruni.

In the LMGTEAm class, fastest was the Porsche of Collard-Perrodo-Vaxiviere in 2.08.271. Third was the 61 Ferrari of Cioci-Venturi-Companc, ahead of car 80 driven by Roda-Ruberti-Segal. Fifth was the Ferrari 81 of Wyatt-Rugolo-Bertolini. Last was the 458 GT2 of Krohn-Jonsson-Collins.
Pole overall in LMP1 went to the Toyota number 8 car of Davidson-Lapierre-Buemi in 1’48’’993. It all gets serious tomorrow with the Circuit of the Americas 6 Hours starting at 17h00 (00.00 CET.)

World Endurance Championship – Back in action in Austin 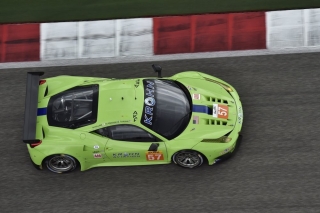 Maranello, 19 September –Three months on from the Le Mans 24 Hours, the World Endurance Championship is back in action, with a further five races on the calendar, with plenty of excitement on the cards. The first of these starts this Saturday at the relatively new Circuit of the Americas, in Austin, Texas, which also hosts the Formula 1 Grand Prix on 12 November. This weekend’s race starts at 17h00 (midnight CET.)

Only the second time. The track was opened in 2012 with the Formula 1 circus in action and last year, it also made its debut as a WEC venue. In 2013, the LMGTE Pro class victory went to Aston Martin, joined on the podium by the two AF Corse 458 Italia GT2s, driven by Gimmi Bruni and Giancarlo Fisichella, who came second ahead of Toni Vilander and Kamui Kobayashi.

Ferraris in the race. This weekend, there will be six Ferrari 458 GT2s on track, split between the usual two categories, LMGTEPro and LMGTEAm. In the former, the first thing to say is that the young and talented British driver James Calado is back at the wheel, after an unlucky qualifying in the Le Mans 24 Hours in June. He shares the 71 car with Davide Rigon. Much is expected of Bruni and Vilander, currently leading the championship with a 27 point lead over the Porsche runners, Holzer and Makowiecki. Ferrari and AF Corse lead the Constructors’ and Teams’ classifications.

The other class. In LMGTEAm, four Ferraris are taking part: the 61 and 81 cars of AF Corse, driven respectively by Luis Perez Companc, Marco Cioci and Mirko Venturi and Stephen Wyatt, Michele Rugolo and Andrea Bertolini. Alongside them, the 458 Italia GT2 entered by Krohn Racing (Tracy Krohn, Niclas Jonsson and Ben Collins) and the 8 Star Motorsports (con Gianluca Roda, Paolo Ruberti e Jeffrey Segal). Leading the classification is the Aston Martin duo of Kristian Poulsen and David Heinemeier-Hansson who are 29 points ahead of the 61 AF Corse car. Leading the whole championship are the Toyota trio of Anthony Davidson, Sebastien Buemi e Nicolas Lapierre.