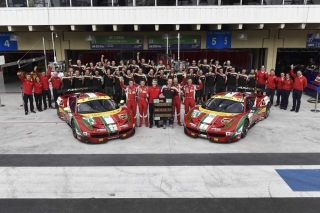 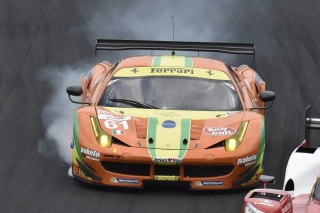 Interlagos, 30 November – In the final round of the World Endurance Championship, the Sao Paulo 6 Hours at Interlagos, Ferrari made a clean sweep of it to take the Constructors’ title in the GT class. The win came after a thrilling race which finished behind the Safety Car. 25 minutes before the chequered flag and accident involving Mark Webber’s Porsche prototype and the 90 Ferrari driven by Matteo Cressoni at the time, meant the race was pretty much over. Fortunately neither driver had any serious injuries.
Today’s is Ferrari 17th endurance world title, the third in a row since the WEC championship started. The first win for the Maranello marque came in 1953, the first year of the series, thanks to amazing drivers like Giuseppe Farina, Alberto Ascari, along with Mike Hawthorn and Giannino Marzotto.

The constructors’ title means that Ferrari and the Italian AF Corse team have enjoyed a very successful season. In June it won the legendary Le Mans 24 Hours, beating prestigious marques such as Porsche, Chevrolet and Aston Martin. In the penultimate round in Bahrain, Gimmi Bruni and Toni Vilander took the title in the LMGTE-Pro class of the World Endurance Championship, while the Amato Ferrari-run AF Corse squad took the team’s title for a third consecutive year.

“It’s a fantastic result,” commented Antonello Coletta immediately after the race, having come to Brazil to support the team in this decisive round. “It’s the third world title in a row for Ferrari in the WEC. Reliability, a great effort from the drivers along with great teamwork came together as the key to this umpteenth success, which demonstrates that Ferrari is at the very top in the GT class. Today, we raced in difficult situations, we had a puncture and there were also a few strategy problems for the 51 car. But in the end we got the points we needed to take the title. It’s a job well done, taking all three titles. For now we can enjoy this splendid victory and as from tomorrow, we can start looking to next season.”

The race. In the Pro category, the best placed Ferrari was the 71 458 Italia, driven by Davide Rigon and James Calado, flying the AF Corse colours, which finished third, ahead of team-mates Gimmi Bruni and Toni Vilander. The class was won by the 97 Aston Martin of Turner and Mucke.
In the LMGTE-Am class, the 81 AF Corse Ferrari driven by Wyatt, Rugolo and Bertolin ended the Sao Paulo 6 Hours in third place. Emerson Fittipaldi had a difficult race on the way to sixth place. When the multiple champion was at the wheel, two and a half hours into the race, he had to pit with a gearbox problem, which took time to fix. The AF Corse mechanics managed to get the car going again in not too long a time. Fittipaldi opted to race in the final round of the WEC in Brazil with the 61 AF Corse Ferrari 458 Italia for his return to racing, having been absent from the cockpit since he last raced in the Brazilian GT back in 2008. It was Emmo’s first time behind the wheel of a Prancing Horse car.
This coming Friday, 5 December, the Ferrari World Endurance Champions will be in Doha for the FIA Prize Giving ceremony and then on Saturday, they will be in Abu Dhabi for the great on-track event at the Finali Mondiali Ferrari. 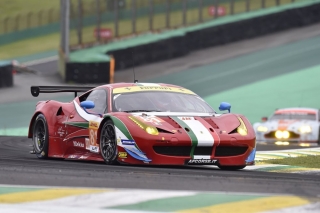 Interlagos, 29 November – It was a disappointing qualifying for Ferrari in the Sao Paulo 6 Hours, the final round of the World Endurance Championship.
At Interlagos, in the Pro category, the AF Corse 71 car driven by youngsters Rigon and Calado and the 51 Ferrari of the World Champions, Bruni and Vilander could only manage 5th and 6th in qualifying. It’s not what the Italian team had been expecting in a session affected by the red flag coming out, when GTE AM car stopped in a run-off area. It meant the Ferrari drivers were unable to show what they could do. Infact, Toni Vilander ended the session with one less timed lap than the others. Aston Martin took the pole in both Pro and Am for tomorrow’s race.

Amato Ferrari: “We had expected a better qualifying result here in Brazil, but the red flag came out just as Toni Vilander was putting in some great lap times and it badly affected his car 51 and the 71 car of Rigon and Calado.”
The best Ferrari performance in GTE Am came from the 81 AF Corse Ferrari 458 Italia, driven by Bertolini, Rugolo and Wyatt, which qualified third. Fourth was Ferrari 61 driven by multi-champion Emerson Fittipaldi, Pier Guid and Segal and fifth went to the 90 car of Team 8 Star Motorsports, crewed by Roda, Ruberti and Cressoni.

While qualifying did not deliver the hoped for results for the Italian Ferrari team, tomorrow’s Sao Paulo 6 Hours looks like being a thriller with plenty of action. The Maranello marque has but one aim, to get a clean sweep and take the Constructors’ title. The race starts at 13h00 (16h00 CET.)

WEC World Endurance Championship – Ferrari in Brazil everything on the red 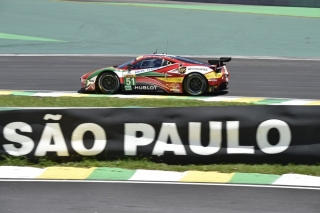 Maranello, 28 November –The scene is set in Interlagos for the final World Endurance Championship (WEC) race of the year, with four titles still up for grabs including the GT constructors. Ferrari leads it, 25 points ahead of Porsche, with Aston Martin now out of the running. The rules state that the first two cars from each constructor can score points, independent of whether they are racing in LMGTE-Pro or LMGTE-Am. The maximum available is 44 points and it means that, if Porsche take one point for pole and finish first and second, then Ferrari must finish at least third and eighth, or fourth and sixth. It’s not impossible, but you never know what surprises the tricky Interlagos track has in store, especially if, as seems likely, it rains.

The champions. As usual in LMGTE-Pro, world champions elect AF Corse have two Ferraris entered, car 51 for champions Gimmi Bruni and Toni Vilander and number 71 for Davide Rigon and James Calado. The responsibility for giving the Maranello marque its 17th world title rests mainly on this quartet. The first title came in 1953, the year the series started, with a classy driver line up of Giuseppe Farina, Alberto Ascari and Mike Hawthorn, as well as Giannino Marzotto and Marco Crosara.

The last temptation of Emmo. In LMGTE-Am, the big nes is the return of Emerson Fittipaldi, as the 67 year old will be driving the AF Corse 61 Ferrari 458 Italia. The Brazilian, who was Formula 1 World Champion 40 years ago with McLaren, will be racing a Maranello car for the first time. Alongside him will be Italy’s Alessandro Pier Guidi and the American Jeffrey Segal. There’s another AF Corse car in this category, the 81 car for Steve Wyatt, Michele Rugolo and Scuderia Ferrari F1 test driver Andrea Bertolini. The fifth Ferrari is the 8 Star Motorsport car crewed by Giorgio Roda, Paolo Ruberti and Matteo Cressoni.

Previously. Ferrari has won 13 GT races in Interlagos. The first wins came in 1950 and ’51, courtesy of Italo-Brazilian Francesco “Chico” Sacco Landi, who won at the wheel of a 125 C. In 1954 and ’55, Brazil’s Celso Lara Barberis took a brace of wins in a 250 MM, while in 1958, another Rio driver, Fritz D’Orey won the Interlagos 500 Km with a special Ferrari he had modified himself. Ferrari returned to winning ways in Brazil in 2006, when the Scuderia Playteam crew of Vilander and Guidi, joined on this occasion by Italy’s Giambattista Giannoccaro won the Brazil 1000 Miles in the GT2 class. There were a further five wins in the Brazilian series between 2006 and 2011, while since the inception of WEC, the race has always been won by Gimmi Bruni and Giancarlo Fisichella. 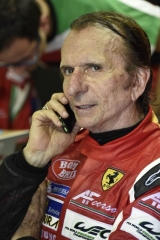 Two time Formula 1 World Champion and winner of the Indy 500, Emerson Fittipaldi will be taking part in the Sao Paulo 6 Hours, the final round of the FIA World Endurance Championship next Sunday, 30 November. The news was announced by Amato Ferrari, Team Principal of the Italian AF Corse team.

“It’s a great honour to have a great champion like Fittipaldi driving for our team,” he said. “Emerson was one of my heroes when I was young and so it’s a pleasure to have him with us in the Sao Paulo race. It will thus see his dream of driving for Ferrari realised. He is very motivated and I’m sure he will do a good job.”

Emerson will race in the GTE Am category in Ferrari number 61, alongside Jeff Segal and Alessandro Pier Guidi. The last time Fittipaldi raced was back in 2008, in a Brazilian GT race.