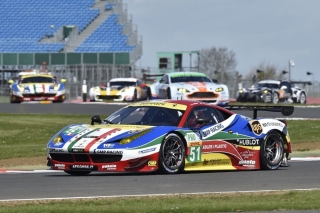 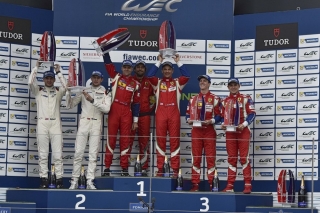 Silverstone, 12 April – The season could not have gotten off to a better start with Ferrari AF Corse World Champions  “Gimmi” Bruni and Toni Vilander taking class victory in the first race of the 2015 World Endurance Championship season. The result was particularly sweet as winning the 6 Hours of Silverstone seemed hard to predict after very tricky qualifying on Saturday… But that is, of course, the beauty of endurance racing.

The race. Things went horribly wrong for the no. 51 Ferrari at the start as “Gimmi” Bruni had to slam on the brakes to avoid a prototype which had spun across the track. Consequently, the Italian driver had to fight his way up from the very back. Out in front the Aston Martins were dominating the action followed by the Porsches. However, a yellow flag as the one-hour mark approached mixed things up nicely: Calado in no. 71 dodged in for a full pit-stop with refueling, tyre change and a swap-over with Davide Rigon, while no. 51 just topped up its tank. Around 30 minutes later, the yellow flag was shown again, at which point no. 51 pitted and Toni Vilander jumped into the driver seat. When the green flag came out again, the group was being led by Rigon’s no. 71 458 Italia ahead of the Porsche of Patrick Pilet and Frederic Makowiecki, and Vilander. The Aston Martins, which had pitted under green flag, then found themselves having to give chase. No. 71, had adopted a different strategy to the rest of the class and so, just after the second hour of the race sounded, Rigon went back in to hand over to Calado again.

Halfway point. At the halfway point of the race, the Porsche of Pilet was leading Bruni, now back at the wheel of no. 51, and Rigon who had just taken over no. 71 from Calado. But shortly after, the German car had to pull in with a problem, leaving the way free for “Gimmi”. With 2 hours and 50 minutes of the race left, the latter handed over the car to Vilander. At that point, the Finn was a handful of tenths ahead of Rigon but over 20 seconds in front of the no. 91 Porsche. From that moment on, the no. 51 Ferrari hung on to its lead and not even the comeback by the Porsche of Christensen and Lietz could worry the reigning world champions. The German car managed to leapfrog the no. 71 Ferrari in the pits at one point but couldn’t take the lead away from no.51 at the last pit-stop when Bruni went back out with a 13-second lead and brilliantly controlled his position all the way to the chequered flag.

GTE Am. In the GTE Am class, the AF Corse no. 83 Ferrari turned in a very solid performance to finish second behind the Aston Martin 98, thanks to the skills of Emmanuel Collard, François Perrodo and Rui Aguas. Viktor Shaitar and Alexey Basov drove SMP Racing’s no. 72 very well indeed with Andrea Bertolini turned in a blistering performance in the final stages. His extraordinary comeback saw the Ferrari working its way up to third place. The overall winner of the race was the Audi of Marcel Fassler, André Lotterer and Benoit Treluyer. The next round in two weeks’ time at the legendary temple of motorsport of Spa-Francorchamps.

World Endurance Championship – Complicated qualifying for the Ferraris at Silverstone 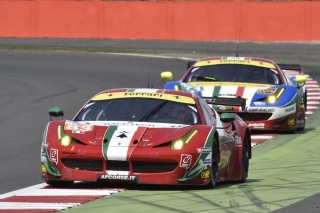 Silverstone, 11 April – Qualifying in the opening round of the 2015 World Endurance Championship proved trickier than expected with the result that the two AF Corse 458 Italias in the GTE-Pro class will be starting from fifth and eighth positions on tomorrow’s GT grid. “Gimmi” Bruni and Toni Vilander’s number 51 struggled to find the right balance on a track slippery by heavy morning rain and had to settle for qualifying fifth fastest in 2’00”701. Number 71, on the other hand, will start from eighth place after James Calado made a mistake at the beginning of his turn at the wheel. The Brit eventually managed to clock a respectable time before passing the car to Davide Rigon who pushed bringing the car’s final time to 2’02”156. Qualifying was dominated by Aston Martin which took the front three positions on the grid, courtesy of car numbers 95 (Nygard-Sorensen-Thiim, 1’59”970), 99 and 97, followed by Porsche number 91 and, ad already said the 51 Ferrari.

GTE-Am. In the GTE-Am class, an Aston Martin, Dalla Lana-Lamy-Lauda’s number 98, was once again fastest to qualify, stopping the clock at 2’01”998. The first of the Ferraris was AF Corse’s number 83 which, thanks to François Perrodo, Emmanuel Collard and Rui Aguas, qualified fourth with 2’03”482 just ahead of the 458 Italia of SMP Racing (2’04”114) driven by Viktor Shaitar, Alexander Basov and official Maranello driver Andrea Bertolini. These results have changed nothing in the run-up to the race: the entire field still faces into six long hours of racing during which an endless string of variables will come into play. The 6 Hours of Silverstone is the first of the eight rounds in the WEC and starts tomorrow at 12.00 local time (13.00 CET).

Bruni: “Ready for an intense season” 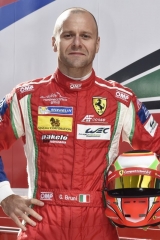 Maranello, 11 April – World GT Champion “Gimmi” Bruni introduces himself and says he’s ready to live an intense season trying to win his third title in a row with AF Corse Ferrari. The World Endurance Championship is the most important and the more competitive series on closed wheels. “Gimmi” will team up with Finn Toni Vilander. The pair will be joined by Giancarlo Fisichella for the Le Mans 24 Hours.

Amato Ferrari: “Now it’s up to the track” 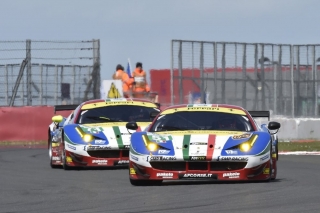 Silverstone, 11 April – AF Corse’s Amato Ferrari is confident looking forward to the new World Endurance Championship season that is about to start. The unchanged GTE drivers line-up, as well as the third drivers for the Le Mans 24 Hours, gives the team a solid basis to work from. The work during the winter season has been intense and expectations are high. Now it’s up to the track telling the truth. 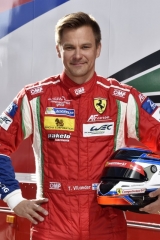 Silverstone, 10 April – World champion Toni Vilander is ready to take the track to fight once again for the title in GTE class. His team mate is the same, consistent Italian “Gimmi” Bruni. Last year the Finn and Bruni were dominant in the championship winning the title, giving AF Corse the teams’ crown and contributing to the win of Ferrari among manufacturers. Nonetheless they also won the Le Mans 24 Hours with the help of third driver Giancarlo Fisichella. 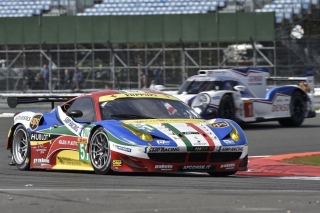 Silverstone, 10 April – The roar of engines at the start of free practice today marked the off for the leading closed wheel auto racing series, the World Endurance Championship, which famously picked up the mantle of the legendary World Sportscar Championship. Ferrari will, of course, be pulling out all the stops to repeat its extraordinary performance of 2014 when the 458 Italia GTE took the Constructors’ title, the Teams’ title thanks to AF Corse and the Drivers’ title courtesy of “Gimmi” Bruni and Toni Vilander. To cap a near-perfect season, it also won the 24 Hours of Le Mans, a victory in itself almost the equal of an entire championship.

Four Ferraris. There are four Prancing Horse cars racing in this elite Championship: two in the GTE-Pro and two in the GTE-Am. Nothing has changed in the line-up for the GTE-Pro with World Champions Bruni and Vilander still paired up in number 51, and Davide Rigon and James Calado still driving number 71. The goals are clear for both duos. The first priority for both will be to reiterate Ferrari’s supremacy amongst the GT constructors. Then, “Gimmi” and Toni’s main aim for the season will be to continue their reign as overall champions and winners at Le Mans. Davide and James, however, will be looking to improve on last year’s podiums with their first WEC career victory.

Am Class. There are, however, changes in the GTE Am with two Ferraris fielded. AF Corse’s number 83 is in the capable hands François Perrodo, Emmanuel Collard and Rui Aguas, while number 72, fielded by SMP Racing, will have at its wheel Russian duo, Viktor Shaitar and Alexey Basov, who will be flanked by expert Ferrari driver Andrea Bertolini, winner of the 2014 European Le Mans Series with Shaitar.

Previous performance. Silverstone is one of motorsport’s most historic and enduring circuits. Ferrari has won there on over 50 occasions. Its first closed wheel victory came on August 26 1950 when Alberto Ascari triumphed in the International Daily Express Trophy in a works 166 MM followed in second by team-mate Dorino Serafini. It was only a year later that the great Argentine driver José Froilan Gonzalez gave the Scuderia its first official Formula 1 win on the British track. Last year, there were no less than eight Ferrari victories at Silverstone in the various GT championships, the last of which was the double on September 20 in the Britcar Championship delivered by Calum Lockie in the 458 Challenge of FF Corse, winner of Class 2. 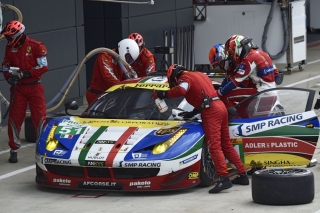 Maranello, April 10 – The GT Sporting Activities Director Antonello Coletta talks on the eve of the first race of the World Endurance Championship of the Ferrari expectations for the 2015 season, that the Prancing Horse tackles as world manufacturer champion along with AF Corse, world champion among teams in 2014, Davide Rigon and James Calado on car number 71 and world drivers champions “Gimmi” Bruni and Toni Vilander on car 51. 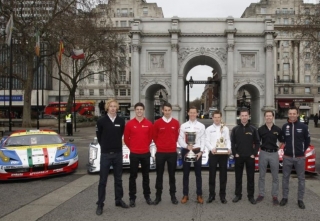 London, 2 April – The first round of the World Endurance Championship, which takes place at Silverstone on 12 April, put on a stylish presentation today. The English 6 Hour Race staged a major show in the centre of London, in which five cars entered in the championship and nine drivers, all from England or the Commonwealth, took part.

Special venue. Five cars were lined up under the famous Marble Arch and attracting much of the attention on a damp English morning was AF Corse’s number 71 Ferrari 458 Italia, along with its British driver, James Calado. Throughout the season, he will be teamed up with Italy’s Davide Rigon and, for the second year running, their team-mates in the number 51 car will be world champions and winners of the Le Mans 24 Hours, Gimmi Bruni and Toni Vilander. The four drivers will be trying to bring home to Maranello another constructors’ title.

A great reception for James. Apart from the Ferrari, which attracted particular attention because of its new livery, there was another GT car, an Aston Martin and three LMP1s, from Audi, Nissan and Toyota. All the drivers got a warm reception, but James Calado proved particularly popular with the crowd, as he is known to be generous towards the fans, signing endless autographs and speaking to them, as well as posing for the obligatory selfies. It has to be said his spectacular and fearless driving style has also won him a strong following.