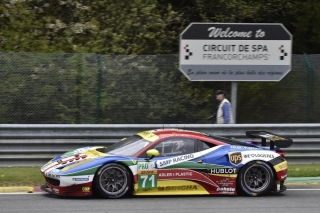 FIA WEC Spa-Francorchamps in pictures by our correspondent Peter Grootswagers 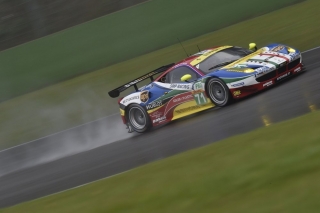 Despite hopes that the WEC 6 Hours of Spa-Francorchamps would prove an exhilarating Saturday for the Ferraris in the GTE-Pro class, it turned out to be an extremely frustrating day as a series of external factors impacted severely on the performances of both cars and drivers alike. Davide Rigon and James Calado in the no. 71 Ferrari were involved in a mid-race collision, while “Gimmi” Bruni and Toni Vilander’s no. 51 paid dearly for a pit-stop problem that turned into a disastrous penalty that sent the reigning world champions to fourth place in the final standings. The second and third position finishes delivered by Ferraris in the GTE-Am 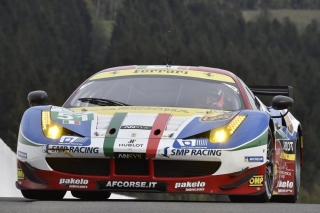 Spa-Francorchamps, 2 May – Despite hopes that the WEC 6 Hours of Spa-Francorchamps would prove an exhilarating Saturday for the Ferraris in the GTE-Pro class, it turned out to be an extremely frustrating day as a series of external factors impacted severely on the performances of both cars and drivers alike. Davide Rigon and James Calado in the no. 71 Ferrari were involved in a mid-race collision, while “Gimmi” Bruni and Toni Vilander’s no. 51 paid dearly for a pit-stop problem that turned into a disastrous penalty that sent the reigning world champions to fourth place in the final standings. The second and third position finishes delivered by Ferraris in the GTE-Am class may not fully compensate for the disappointment but still attest to the superb competitiveness of the cars and their drivers.

The race. The start showcased just how fast the Aston Martins are. No. 99 and no. 97 set the pace initially but Bruni, at the wheel of AF Corse’s no. 51 Ferrari, was well able to keep up. He was faster in the mixed but was unable to attack on the straight because of the British cars’ top speeds. Rigon was grappling with the same conundrum not far behind, finding himself stuck in fifth position studying the rear end of the no. 95 Aston Martin. The first half of the race unfolded without any major upsets – the only real surprise was that the no. 97 Aston Martin adopted a different strategy to the rest of the cars and pitted earlier.

The crash. Unfortunately, a crash put paid to the well-laid plans of one half the AF Corse garage. Three hours and 11 minutes from the en of the race, Rigon, who had taken over the car from a brilliant Calado, was just about to lap a Porsche. The Italian driver attempted his attack at the Bus Stop chicane, but the Porsche closed the door, spun and then sent Davide’s car into a spin too. Bruni arrived at the scene of the accident a little later and had to slow to avoid the cars now at a standstill on the track. Rigon got back in the race but in doing so forced a prototype off the track and got a 5-second stop&go penalty for his trouble. He also pitted for a tyre change. At that point, however, his race was severely compromised and the car finished seventh in the end.

The finale. The last two hours were thrilling: Vilander turned in a very solid drive that left the gap between him and the two lead cars unchanged. Then Bruni took over and really upped the speed ante which initially saw him dispense with no. 97 (Turner-Mucke-Bell) before getting right up behind no. 99 (MacDowall-Stanaway- Rees). Before the English car pitted, Bruni had managed to pass MacDowall in a wonderfully elegant, confident manoeuvre. But when his turn came to pit, he ended up losing his position. Unfortunately, that was far from all he lost in the pits as the mechanics failed to check one of his tyres and the marshals deemed this a safety irregularity. Bruni rejoined the race in second 11” from no. 99, now in the hands of Fernando Rees, but just a short while later the incident in the pits was under investigation. The no. 51 Ferrari bridged the gap with Rees getting on his tail just as the very severe 1-minute stop&go penalty was announced. Bruni passed the Aston Martin but had to stop shortly afterward to complete his penalty and was fourth across the line in the end behind Rees and the two Porsches of Lietz-Makowiecki and Muller-Estre.

GTE-Am. The three Ferraris racing in the GTE-Am class acquitted themselves very honourably indeed. Dalla Lana-Lamy-Lauda in the no. 98 Aston Martin won the race, repeating their Silverstone victory. However, just as happened in England, the other two steps on the podium were taken by the no. 83 AF Corse Ferrari driven by Rui Aguas, François Perrodo and Emmanuel Collard, and SMP’s no. 72 Ferrari fielded by Andrea Bertolini, Alexey Basov and Viktor Shaytar. The third Ferrari, Matt Griffin, Duncan Cameron and Alexander Mortimer’s no. 55, was seventh.

The next round of the WEC is the legendary 24 Hours of Le Mans which takes place on June 13 and 14. 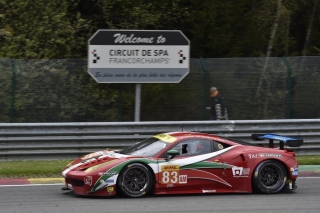 Spa-Francorchamps, 1 May – It was a tight qualifying session for the 6 Hours of Spa-Francorchamps, the second round of the 2015 World Endurance Championship (WEC) season. The best on the grid in the GTE Pro class was the no. 99 Aston Martin of Reed-MacDowall-Stanaway who got a combined time of 2’16”840. However, duo of Ferrari 458 Italia world champions, “Gimmi” Bruni and Toni Vilander, were in tight contention, qualifying second behind the Aston Martin. Bruni and Vilander stopped the clock at 2’16”910, just seven hundredths off pole position. Bruni was the first out on the track getting a time of 2’17”5 then handing the no. 51 car to Vilander. The Finn set a good 2’17”401 and then gave back the car to the Italian who in his last attempt, a few seconds from the end of the session, was able to establish an astonishing 2’16”420 (fastest time overall) that led to the final combined time.

James and Davide. The other AF Corse GTE Ferrari team, the no. 71 of James Calado and Davide Rigon, will start from fourth position, qualifying with a combined time of 2’17”526. Rigon was the first on track, setting a 2’17”501 pace while Calado stopped the clock at 2’17”551. The two drivers have continuously shown improvement as teammates, especially with this weekend similar qualifying times. Between the two Ferraris is the no. 97 Aston Martin of Turner-Mucke-Bell who qualified with a combined time of 2’17”231.

GTE-Am. There were three more Ferrari on the track, AF Corse’s no. 55 and no. 83 and SMP Racing’s no. 72. The best was car no. 55 driven by Matt Griffin, Duncan Cameron and Alexander Mortimer who will start from fourth position in the GTE-Am class after qualifying with a time of 2’21”893. The no. 83 of Emmanuel Collard, François Perrodo and Rui Aguas stopped just over six hundredths from their teammates getting a time of 2’19”958. SMP Racing’s no. 72 team formed by Alexey Basov, Viktor Shaytar and Andrea Bertolini, set the sixth time with 2’22”909. Fastest in the class was no. 98 Aston Martin of Paul Dalla Lana, Pedro Lamy and Mathias Lauda. Overall pole position went to no.17 Porsche of Webber-Bernhard-Hartley. The start of the 6 Hours of Spa is at 14.30. 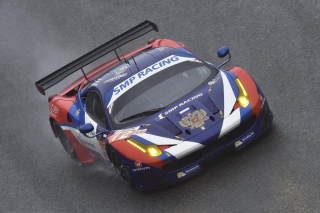 Spa, 30 April  –  The World Endurance Championship (WEC) calendar comprises eight rounds taking in some of motorsport’s most fascinating and historic circuits. The two European tracks that represent the pinnacle of endurance racing achievement and history have to be Spa-Francorchamps and Le Mans. Happily, this season the WEC offers them up one after another, in a veritable crescendo of action culminating in the 24 Hours at the legendary Sarthe circuit in mid-June.

The situation. The Belgian event is the second round of the 2015 WEC, which kicked off with a spectacular Four Hours of Silverstone on April 12.  In round one, AF Corse  and its drivers, World Champions “Gimmi” Bruni and Toni Vilander, did the business in the GT class, in which Ferrari holds Constructors’, Team (courtesy of AF Corse) and Drivers’ titles. They overtook the Porsches and Aston Martins, thanks not only their own individual talents and those of the 458 Italia GTE, but also a brilliantly-honed strategy. In the end, AF’s cars no. 51 and 71 finished in the top positions after a tricky qualifying session. Bruni and Vilander held sway over the Porsche of Richard Lietz and Michael Christensen, and team-mates Davide Rigon and James Calado. In this weekend’s race, Porsche is already mixing up its crews, with Lietz pairing up with the expert Frederic Makowiecki in car no. 92 while Sven Muller and Kevin Estre get the drive of no. 91. The Aston Martins still have to confirm, but delivered a blistering pace at Silverstone even though they didn’t manage to hang on with the leaders in the race itself. No changes at AF Corse with Bruni-Vilander looking to repeat their success of last year while Rigon-Calado will be seeing this as an opportunity to take their maiden victory, the main goal for the season.  The Belgian circuit is special to the two young AF Corse drivers also because it was there they took their first podium together. In the video that goes with this piece, Rigon happily confirms that Spa-Francorchamps is his favourite track: “Eau Rouge and Radillon are two corners that make up a legendary stretch in motor-racing, but even the big, highly technical bends and high-speed straights deliver almost indescribable emotions.”

GTE-Am. There are three more 458 Italias entered in the other GT category: two under the AF Corse colours and one for SMP Racing, no. 72 with official driver Andrea Bertolini, and Russians Viktor Shaytar and Alexey Basov. AF Corse car no. 83 will be fielded by François Perrodo and Emmanuel Collard flanked by Rui Aguas, while the new car no. 55 is in the capable hands of well-established GT duo,  Duncan Cameron and Matt Griffin, and another British driver, Alexander Mortimer. The class favourites are Silverstone winners, Paul Dalla Lana, Pedro Lamy and Mathias Lauda in the Aston Martin (no. 98).

History. The Spa-Francorchamps circuit is very special to all drivers, teams and constructors. But Ferrari and the Ardennes track have a genuinely special relationship. It was at the 24 Hours of Spa on July 9 1932, in fact, that the Prancing Horse made its debut on Enzo Ferrari’s Alfa Romeos. The emblem inherited from Francesco Baracca brought instant good luck as the race was dominated by the Scuderia Ferrari’s 8C 2300 MMs. In fact, Antonio Brivio and Eugenio Siena were first across the line ahead of the car of their team-mates,  Piero Taruffi and Guido d’Ippolito. In the intervening years, the Ferrari name and badge has taken the top step on the Belgian podium over eight times. The first actual Ferrari car to win at Spa was a 166 MM entered and driven by Luigi Chinetti who had Jean Lucas as his co-driver, in the 1949 24 Hours.  The last Prancing Horse victory came as recently as 2014 courtesy of the AF Corse 458 Italia driven by Cameron and Griffin, who won the GTS class of the September race valid for the International GT Open Championship. Today brings free practice with one final session tomorrow before qualifying begins at 18.00. The race itself takes place on Saturday, starting at 14.30 and ending at 20.30 just as night falls. 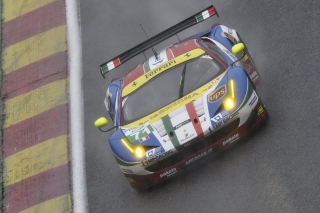 Maranello, 29 April – James Calado and Davide Rigon are a racing pair since last year racing on the second AF Corse Ferrari in the World Endurance Championship, GTE-Pro category. Their first podium came at Spa-Francorchamps, where the WEC will race on Saturday. Their car is No. 71 and their goal for 2015 is to win the first race together. Both come from singleseaters, James raced in GP2 and in Formula 1 has done some Friday practice sessions and some testing with Force India; Davide also raced in GP2 and has tasted Scuderia Ferrari’s Formula 1 car during some testing sessions. Davide is a Scuderia Ferrari driver and for the Formula 1 team also carries on some simulator work.