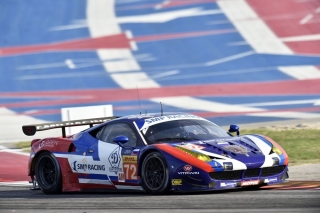 FIA WEC: all the emotions from the 6 Hours of COTA 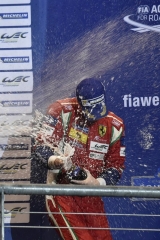 Austin, 22 September – Relive all the emotions of the 6 Hours of COTA, fifth round of the World Endurance Championship (WEC), with the great victory of SMP Racing’s Ferrari number 72 of Andrea Bertolini, Viktor Shaytar and Aleksey Basov, the podium finishes of the 458 Italias number 71 (Calado-Rigon) and 83 (Collard-Perrodo-Aguas), both fielded by AF Corse, and the disappointment of crew of car number 51, the world champions “Gimmi” Bruni and Toni Vilander, slowed by an issue with a door while they were comfortably third and could fight for second.

WEC – 6 Hours of COTA: third win in a row for Bertolini-Shaytar-Basov 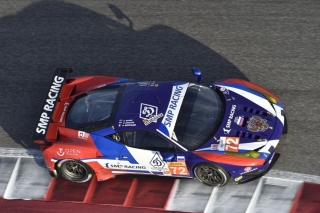 Austin, 19 September – Ferrari had another race of contrasts in the World Endurance Championship (WEC). After a difficult qualifying, James Calado and Davide Rigon finished third to limit the damage in the GTE-Pro, won by Porsche, while bad luck continued to dog “Gimmi” Bruni and Toni Vilander. SMP Racing’s Bertolini-Basov-Shaytar logged another victory in the Am class to stretch their lead in the standings.

GTE-Pro. In GTE-Pro Bruni class started the race in the no. 51 and Rigon in no. 71. Once their tyres had warmed up, the two began their comeback. In the first hour Bruni took his AF Corse team 458 Italia into third place, while Rigon handed over the car to James Calado in fifth. Vilander, who picked up the baton from Bruni, maintained its position behind the two Porsches while Calado passed the last Aston Martin to move up into fourth. The fourth pit stop of the race came just over four hours in. Everything went smoothly for the no. 71, with Rigon back behind the wheel, while on no. 51 some issues with the left door 51 knocked Bruni back a long way. The Porsche no. 91 of Lietz-Cristensen won the race ahead of its sister car driven by Pilet-Makowiecki, with Calado and Rigon in third and Bruni and Vilander in seventh. Ferrari still leads the Constructors’ championship, but Porsche made up more ground. Among the drivers Lietz stretched his lead slightly over Rigon and Calado and more markedly over Bruni and Vilander

GTE-Am. The GTE-Am class start was a bitter experience for car no. 83 AF Corse. Emmanuel Collard jumped the green flag at the start, which cost a drive through for the car shared with Rui Aguas and François Perrodo. However, the three did well to climb into second place with two hours to go. The no. 72 of SMP Racing, driven by championship leaders Andrea Bertolini, Aleksey Basov and Viktor Shaytar also led before slipping back. However, Ferrari mounted a comeback in the last two hours. First Perrodo, then Bertolini caught up with the Porsche no. 77 of Dempsey-Long-Seefried before overtaking the star driver and pulling away. Andrea pushed hard until the pit stop and the team successfully finished the job sending out the no. 72 ahead of no. 83, which in the end slipped to third place behind the Porsche no. 88 of Reid-Al Qubaisi-Bamber. Bertolini, Basov and Shaytar stretched their lead in the standings ahead of their stable mates in no. 83. The next race, the 6 Hours of Fuji, is on 11 October.

WEC – Qualifying without sparkles for Ferrari at Austin 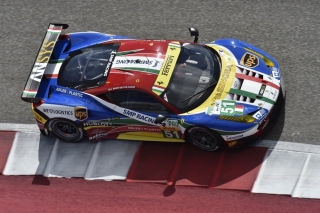 Austin, 18 September – Qualifying without sparkles for the four Ferrari 458 Italias competing in the fifth round of the World Endurance Championship struggling for grip for the entire session. The race pace displayed during the last session of the free practice, anyway, gives reason for optimism for the 6 Hours that is due to start at 5 p.m. (24 CET)  tomorrow.

GTE-Pro. In GTE-Pro class, Toni Vilander and Davide Rigon, at the wheel of cars No. 51 and 71 respectively, opened the qualifying session. The Finn, reigning world champion, recorded a time of 2’07”204 while Rigon stopped the clock at 2’07”114. Both drivers struggled to correctly bring the tyres to temperature and had to contend with low grip. Before handing off the car to James Calado, Davide was able to come down to 2’06”798. After the driver change, “Gimmi” Bruni on car No. 51 was able to clock 2’06”368 thus bringing the overall average time to 2’06”786 (sixth place), while car No. 71 recorded an overall time of 2’06”975 (seventh place). The pole position for the category went to the Aston Martin No. 99 of Satanaway-MacDowall-Rees with a time of 2’05”872. The Porsche of Jani-Dumas-Lieb earned the overall pole position thanks to a time of 1’46”211. The race is long and the good pace displayed by the Ferraris augurs well. Both the world champion crew and the Calado-Rigon pair will face a come-from-behind race tomorrow, so it won’t be an easy day.

GTE-Am. In the GTE-Am class, a Ferrari came within a whisker of the pole position. The Aston Martin No. 96 of Hall-Castellacci-Simonsen, which recorded a time of 2’08”264, will start ahead of everyone, but the 458 Italia No. 83 of AF Corse entrusted to François Perrodo, Emmanuel Collard, and Rui Aguas was just 68 thousandths of a second behind. However, another competitor squeezed between these two cars: the Porsche No. 77 of Dempsey-Proton Racing driven by Dempsey-Long-Seefried. The standings are extremely tight also in the following positions: the Aston Martin No. 98 of Dalla Lana-Lamy-Lauda placed fourth in 2’08”440 just 2 thousandths of a second ahead of  the SMP Racing’s 458 Italia No. 72 of championship leaders Viktor Shaytar, Aleksei Basov and Andrea Bertolini. Therefore, the race which starts at 5 p.m. tomorrow promises to be incredibly tight. 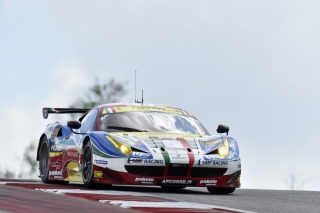 Austin, 17 Sept – The World Endurance Championship (WEC) resumes this weekend with the first intercontinental race, which will see drivers and cars at the Circuit of the Americas in Austin, Texas. Four Ferraris are due to start.

LMGTE-Pro. Two Ferrari crews are thirsting for revenge in the Pro class. In the last race, at the Nurburgring, electronic problems crippled the 458 Italia no. 51 AF Corse of reigning world champions Toni Vilander and “Gimmi” Bruni. At the same time James Calado and Davide Rigon, the crew of the twin no. 71, finished third in an unlucky race that ended with a first and second for Porsche. However, everything is still to play for in the championship, with Porsche driver Richard Lietz only one point ahead of Rigon-Calado and 10.5 in front of Bruni-Vilander. Aston Martin tends to do well in Austin and so the fight for first is likely to be against the British luxury cars. In the constructors’ championship, Ferrari is 24 points ahead of Porsche and 60 in front of Aston Martin.

LMGTE-Am. The contest is also tight in the Am class, where, however, it is the Ferrari crews that are calling the shots. The drivers of Ferrari no. 72 SMP Racing top the standings having won the last races including the Le Mans 24 Hours. Aleksey Basov, Victor Shaytar and Andrea Bertolini are on 106 points, 25 more than the no. 81 Ferrari AF Corse of François Perrodo, Emmanuel Collard and Rui Aguas and 35 ahead of the Aston Martin of Dalla Lana-Lauda-Lamy, winner of the first two races of the season.

Programme. The weekend menu is very interesting. As well as the WEC, which starts at 5pm on Saturday local time or midnight in Italy, and will end at 11pm (6pm CET), Ferraris will be taking part in the United SportsCar Championship, about which you can read here. A Ferrari has never won at the Circuit of the Americas and it’s high time to break the jinx.