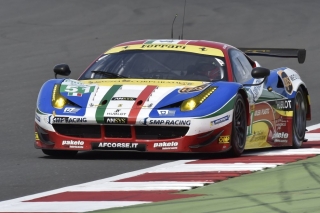 Le Castellet, 28 March – This afternoon, the official test session for the World Endurance Championship ended. It was the final opportunity for teams, drivers and constructors in the most important closed wheel championship in the world to fine tune the last details before the season gets underway. Ferrari, the winning GT constructor in 2014, fielded five cars representing three teams. For the second day at the French track, the sun continued to shine, but unlike the opening day, this time the very strong Mistral wind stopped blowing, thus allowing drivers to get the most out of the cars, lowering the lap times and completing race simulations in conditions much closer to those they will encounter in Silverstone on 12th April, assuming the rain holds off.

GTE Pro. The two AF Corse 458 Italias in the GTE Pro category got through their planned programme. The fastest times were posted in the morning. The 51 car of “Gimmi” Bruni and Toni Vilander completed 65 laps, with a very good fastest lap in 1.57.440, one tenth off the number 99 Aston Martin of Alex MacDowell and Fernando Rees, who were quickest on the day, in 1.57.331. In the afternoon, the 2014 world champions did a further 25 laps stopping the clocks in 1.58.038. The Aston Martin was again out in front, this time though it was the 95 car of Marco Sorensen, who managed a 1.57.675, followed by the 91 Porsche of Richard Lietz, Michael Christensen e Jorg Bergmeister (1’57”976). The number 71 car of Davide Rigon and James Calado also set its best time in the morning: 1.58.327, the best of 18 laps completed before the lunch break, coming close to it in the afternoon with a 1.58.392, set on the 11th of 30 laps in total.

GTE Am. In the GTE Am category, all three 458 Italias, entered by three different teams, got through all their programme. Particularly outstanding was the JMW Motorsport car driven by Michael Avenatti e Jakub Giermaziak, who in the morning were second fastest in 1.57.851, beaten only by the Aston Martin 96 car of Francesco Castellacci, Roald Goethe and Stuart Hall. The two other 458 Italias also got through a lot of work and laps, the AF Corse 83 car of François Perrodo, Emmanuel Collard and Rui Aguas (1’59”291 their best time, set in the afternoon) and the 72  car entered by SMP Racing for Viktor Shaitar, Aleksey Basov and the factory Ferrari driver, Andrea Bertolini (1’58”838, their best time in the morning.) The next time these cars take to the track will be in free practice at Silverstone, for the first race of the 2015 World Endurance Championship. 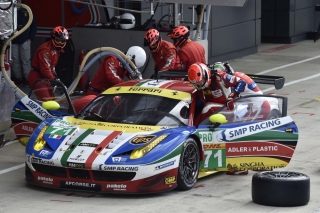 Le Castellet, 27 March – The final two days of pre-season testing for the World Endurance Championship are taking place at the Paul Ricard circuit, prior to the opening round of the season at Silverstone, on 12th April. Ferrari, the GT Constructors World Champions, have got five cars running, three entered by AF Corse, the reigning champions in both teams and drivers in the GTE Pro category with Gimmi Bruni and Tony Vilander.

New livery. The Paul Ricard test has provided the backdrop for the Amato Ferrari-run team to present its new livery for the 2015 season, which features a touch of blue being added to the traditional white, red and green, and the black and yellow. The livery was unveiled in the pit garage of the four drivers in GTE Pro, including therefore Bruni and Vilander, who this season will again team up in the number 51 car, alongside Davide Rigon and James Calado, who for the second consecutive year will be at the wheel of the number 71 458 Italia.

Three Am cars. Also running at Paul Ricard are three 458 Italias entered in the GTE Am category. Driving AF Corse’s number 83 car are François Perrodo, Emmanuel Collard and Rui Aguas while at the wheel of the 72 car entered by the SMP Racing team will be the Russians Victor Shaytar, Aleksey Basov alongside the official Ferrari driver, Italy’s Andrea Bertolini. The third 458 Italia is entered by the JMW Motorsport team for Michael Avenatti and Jakub Giermaziak. The first day of testing also includes a night session, with tomorrow’s final day being open to the general public.