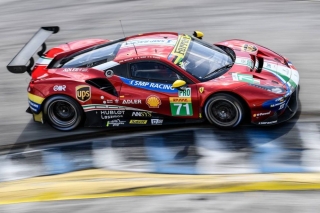 Maranello, 1 May 2019 – The penultimate act of the FIA World Endurance Championship (WEC) Super Season takes place this weekend at the legendary Spa-Francorchamps track in Belgium. The seventh of a season that concludes with the 24 Hours of Le Mans, follows the 12 Hours of Sebring where the Ferrari of Spirit of Race driven by Flohr, Fisichella and Castellacci triumphed in the Pro-Am class. Five Ferraris are due to start, two in the GTE-Pro class and three in the GTE-Am.

Not an easy race. The 6 Hours of Spa-Francorchamps that marked the start of the 2018-19 Super Season was particularly tricky for Ferrari, because of the Balance of Performance. However, it nevertheless secured unexpected podiums in the GTE-Pro with Davide Rigon and Sam Bird, and in the GTE-Am with Matt Griffin, Weng Sun Mok and Keita Sawa for Clearwater Racing. One year later, the situation remains the same at least as far as the BoP is concerned. The potential of the 488 GTE is still more limited than its rivals. So there are no high hopes for the Belgian race. Maranello’s cars will try to use the car’s aerodynamic and chassis qualities to hold off their opponents in the stretches of the circuit that runs along the hills of the Ardennes.

GTE-Pro. In the GTE-Pro, Alessandro Pier Guidi and James Calado will be in world champion car no. 51, while Davide Rigon and Sam Bird in car no. 71, will try to repeat the podium won in round 1.

GTE-Am. In the GTE-Am, the Spa-Francorchamps race offers a chance to Spirit Of Race no. 54 crewed by Giancarlo Fisichella, Thomas Flohr and Francesco Castellacci, to further close the gap on the championship leaders after the podium won in Florida. Matteo Cressoni, Matt Griffin and Luis Perez Companc in Clearwater Racing no. 61 will be seeking payback after an unlucky 12 Hours of Sebring. The third Ferrari in the class is the no. 70 of MR Racing, with Olivier Beretta, Eddie Cheever III and Motoaki Ishikawa which finished fifth in the gruelling American marathon.

History. Ferrari has a long tradition of success at the Belgian track, with over 100 victories to its name. The first came in 1949 courtesy of Luigi Chinetti and Jean Lucas, in a 166 MM, while the latest was the very recent triumph of Jiří Písařík, Josef Kral, Matteo Malucelli in the colours of Scuderia Praha at the 12H of Spa in the 24H Series.

Programme. The first free practice session was on dry track while the second one was affected by torrential rain and was interrupted three times with the red flag. It seems rain will stay for the rest of the weekend, Tomorrow at 11 the cars will take the track for the last free practice session while qualifying will be at 3 pm. The six-hour race kicks off at 1.30 p.m. on Saturday.