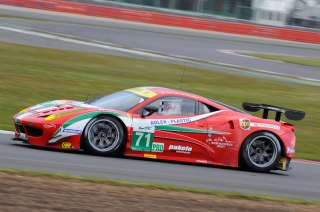 Podium for Kamui Kobayashi at Silverstone 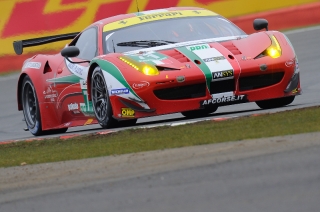 SILVERSTONE, April 14 – Kamui Kobayashi celebrated his debut race in the N°71 AF Corse Ferrari 458 Italia GT2 with a podium finish in association with Toni Vilander (FIN). The pair came second in the GTE Pro category of the 6 Hours of Silverstone, round one of the 2013 FIA World Endurance Championship, and they immediately felt at ease with the car and their technical staff. Giancarlo Fisichella and Gianmaria Bruni (N°51 AF Corse Ferrari 458 Italia GT2) were fifth in the GTE Pro class at the chequered flag. The Italians’ result did not reflect the true potential of their package due to a number of unlucky incidents which affected their race. Ferrari also finished on the podium in the GTE Am category thanks to the third place secured by Enzo Potolicchio, Philippe Peter and Rui Aguas in the N°81 AF Corserun 8 Star Motorsport 458 Italia GT2. The trio was even second in the class until the penultimate lap when the N°50 Corvette hit the 458 Italia from behind. Thanks to extremely quick repairs in the pits, the team enabled the car to continue and collect a top-three result. Jack Gerber, Marco Cioci and Matt Griffin were eighth in GTE Am in the N°61 AF Corse Ferrari. Their race was troubled by a collision with an LMP1 prototype which crashed into its front-right wing. The team’s technicians managed to repair the N°61 458 which re-joined the race after just 30 m inutes in its garage. 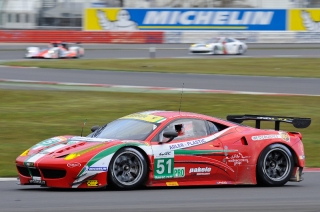 Silverstone, 13 April 2013 – Not a great day for the 458 Italia in this season’s first race in the Endurance World Championship, held in Silverstone.The best result in the qualifying on a wet track, dominated by Aston Martin, was a fifth position (2.01.512 the average lap time set by the drivers according to the new rules) by car no. 51, driven by Giancarlo Fisichella and Gimmi Bruni, ahead of the other AF Corse car with Kamui Kobayashi and Toni Vilander (2.01.803).In the GTE AM category the best place gained by a car from Maranello war a third with Gerber-Cioci-Griffin (AF Corse), ahead of the 8Star Motorsport team with Potolicchio, Aguas and Peter, followed by Krohn-Jonsson-Mediani (Krohn Racing) on 7th position. The 6 Hours of Silverstone will start tomorrow at 12pm GMT.