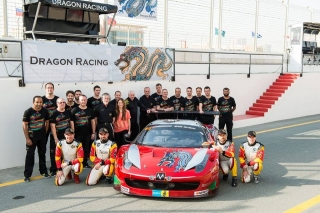 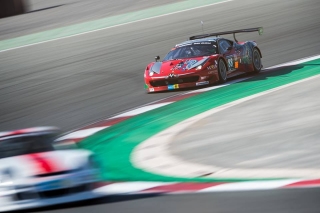 Dubai, 10 January –Ferrari’s 2015 season has got off to the best possible start. The first race of the year, the Dubai 24 Hours, which ended today at the Emirati track, concluded with a win, courtesy of Dragon Racing and its number 88 458 Italia GT3. It took victory in the A6 Am class, driven by Saudi Mohammed Jawa, South Africa’s Jordan Gregor, British driver Rob Barff and the hard charging Irishman Matt Griffin. The quartet totally dominated proceedings, finishing a massive distance ahead of the number 23 Nissan, crewed by Florian Strauss, Ricardo Sanchez, Ahmed bin Khanen and Gaetan Paletou. Third was the 99 Porsche of Attempto Racing, driven by Arkim Aka, Andreas Lihem, Bernd Kleinbach, Philipp Wlazik and Bill Barazetti. The Dragon Racing car came home third overall and was never challenged, also setting the race fastest lap.

Just off the podium. Unfortunately, in the AC Pro class, the Scuderia Praha 458 Italia GT3 just missed out on a podium. Having started from the back of the grid because of a problem during qualifying, the number 4 car crewed by Matteo Malucelli, Peter Kox, Jiri Pisarik and Jaromis Jirik, gradually moved up the order, even getting as high as third at one point. They finished fourth, behind the two Mercedes of the Black Falcon team, which won outright with Abdoulaziz Al Faisal, Hubert Haupt, Yelmer Buurman and Oliver Webb and the RAM Racing car, while the Aston Martin of KPM Racing 1 was third.

Unlucky. The best placed 458 Italia on the grid, the number 15 car entered by Glorax Racing, didn’t even make the start. The car was involved in an accident before the start, with STP Racing’s 62 Porsche. It was a great disappointment for Per Andrey Alexandrovich, Rino Mastronardi, Gabriele Lancieri, Dimitri Deverikos and Isaac Tutumlu. The Dubai 24 Hours is part of the 24H Series championship, which will be back in action at the start of March when it’s time for the Mugello 12 Hours. 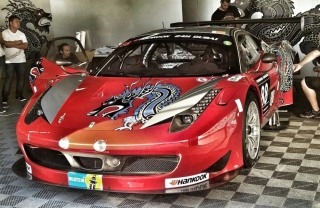 Dubai, 8 January –It’s already time to get back on track in the world of endurance racing. Tomorrow and Saturday sees the Dubai 24 Hours taking place, with 90 cars on track in the various categories. They include three Ferrari 458 GT3, which could do very well even though they’re not right at the front after qualifying.

Qualifying. The Glorax Racing number 15 car will start from 11th on the grid, with five drivers on the roster: Russia’s Andrey Alexandrovich, the Italians Rino Mastronardi and Gabriele Lancieri (2008 Italian GT champion), Greece’s Dimitri Deverikos and the Spaniard Isaac Tutumlu, the latter two being the 2013 Spanish GT champions. The car is at the back of group that’s crammed into just 2 seconds.

Dragon Racing’s 458 number 88 will start from 15th on the grid crewed by the Saudi Mohammed Jawa, South Africa’s Jordan Grogor, British driver Rob Barff and the impressive Irishman Matt Griffin, the 2013 European Le Mans Series champion in the RAM Racing Ferrari. It was a difficult qualifying however, for the Scuderia Praha number 4 car, which has to start from the back after failing to post a valid time. At the wheel are Italy’s Matteo Malucelli, the expert Dutch driver Peter Kox and the Czechs Jiri Pisarik and Jaromis Jirik. Pole position went to the Fach Auto Tech Porsche crewed by the Germans Otto Klohs, Jens Richter, Sven Muller and the Austrian Martin Ragginger. The race starts at 14h00 (11h00 CET.)

Previously. In the past in Dubai, Ferrari has won eight times, the first dating back to 2004 courtesy of Matteo Bobbi and Gabriele Gardel in the BMS Scuderia Italia 550 Maranello. The following year, Gardel won with Pedro Lamy in a similar car run by Larbre Competition. In 2008, the class win went to the Khaleji Motorsports 458 GT3 with the American John Sinders, the Saudi, Karim Ojjeh and the Britons Joe Macari, Rob Wilson and Adrian Newey, the English engineer enjoying a very different job to usual. In 2012, there were five wins thanks to Rob Barff and South Africa’s Leon Price at the wheel of the AUH Motorsports 458, however these were all local races.